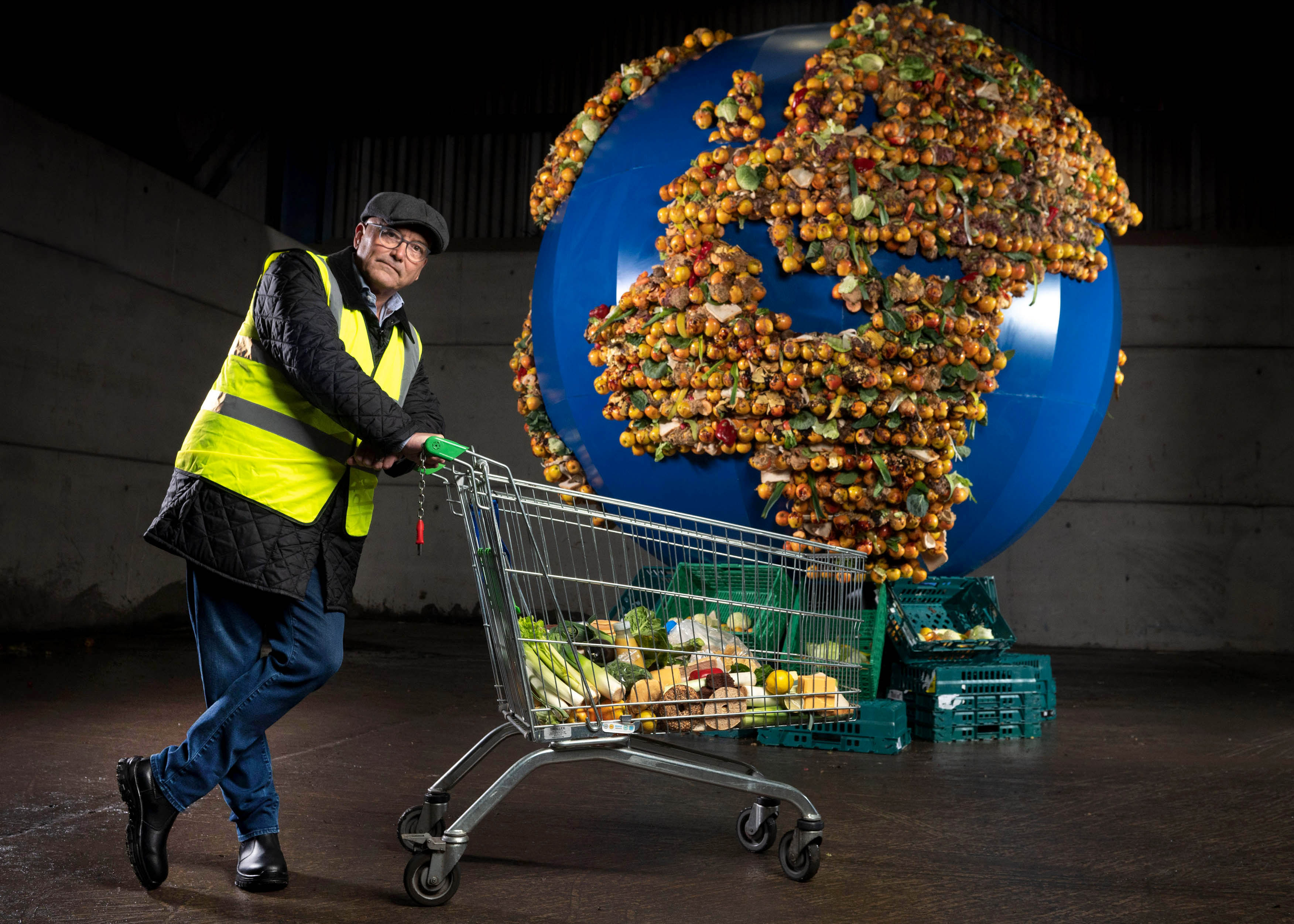 The second annual Food Waste Action Week begins today, Monday 7 March, with television presenter Gregg Wallace taking the reins to raise people’s awareness of the huge impact of household food waste on climate change and share practical advice, food savvy behaviours and tips on how we can all easily reduce the food we waste in our homes. Particular attention is being paid to the UFOs that get stuck in our freezer and never find their way onto our plates.

With only around one-in-three people in the UK seeing a clear link between wasting food and climate change, Gregg has been working with Love Food Hate Waste – the brand behind the Week of action - to create a powerful installation using food waste to show the scale of the issue. The installation brings to life the campaign’s hard-hitting creatives to convey the fact that food going to waste in our own homes is directly feeding climate change. The campaign will run in the UK and globally across social media channels.

Gregg Wallace, TV presenter, said “No one hates seeing good food go to waste more than I do, and often it’s simple changes in how we store food that make the biggest difference. That’s why I’m delighted to support this year’s Food Waste Action Week and Love Food Hate Waste. The fact is, we are all responsible for the vast majority of food waste that happens in the UK - 70% - so we really need to be part of the solution for the sake of the planet. And with food prices going up and other pressures on disposable income, the savings you’ll make to the family budget by wasting less food are significant.”

We throw away 6.6 million tonnes of household food waste a year in the UK. This food waste is responsible for nearly 25 million tonnes of CO2 emissions, equivalent to 5.4% of the UK’s territorial emissions. The majority, 4.5 million tonnes is food that could have been eaten and is worth approximately £14 billion (or £60 a month an average family with two children). It requires an area almost the size of Wales to produce all the food and drink currently wasted in the UK. 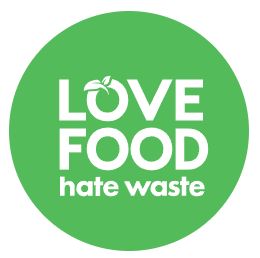 Love Food Hate Waste runs an annual survey of people’s habits and knowledge around food waste. This highlighted that 81% of UK citizens are concerned about climate change, but only 32% see a clear link with food waste. The survey helped to inform the theme of the Week and the development of materials to motivate people to act. This year, Love Food Hate Waste found that the public’s relationship with its freezers has become particularly frosty, with 35% of the population saying their freezer is “sometimes a total disaster and [it’s] extremely hard to work out what’s in there.” And 19% of people having thrown away something frozen in the past two weeks because it has laid dormant for too long.

More worryingly, as many as 69% of people*** believe it’s safe to defrost meat at ‘room temperature’, which is the exact opposite of Food Standards Agency guidance and may be putting them at risk of illness.

Sarah Clayton, Love Food Hate Waste, “Getting to grips with freezing and defrosting are big factors in preventing food from going to waste at home. At a time of rising food prices alongside huge public concern about climate change, tackling food waste at home is one way we can all make a difference and save money. For the average family with children, the cost of binning food can be more than £700 per year. So, Food Waste Action Week is all about avoiding those UFOs and being savvy in how we store but then use our food.”

Love Food Hate Waste is keen to show that used properly, the freezer is the king of the kitchen. In fact, freezing and defrosting just three key meat items that are commonly not used in time (fresh chicken, bacon, and sausages) could reduce waste of those items by as much as 15,000 tonnes per annum. And, when it comes to defrosting, busy households can avoid a lengthy overnight defrost by using their microwave instead – as people use a toaster to defrost sliced bread from the freezer.

More than 15 influencers, including chef Melissa Hemsley are lending their support to Food Waste Action Week through their social channels, demonstrating key food behaviours that can help to prevent food waste. And the focus on food waste will be extended through the hospitality and food service sector, with the Guardians of Grub campaign providing free resources and advice for out of home eateries to focus on food waste during the Week.

Love Food Hate Waste is also asking the public to share their own Unidentified Frozen Objects on social media, using the hashtag #FoodWasteActionWeek to drive home the importance of labeling the food we freeze. Food Waste Action Week will signpost people to information and resources on the Love Food Hate Waste website to help tackle a range of common food waste issues.

And for the first time Food Waste Action Week is also working with partners around the globe to make this an international week of action. Partners will be supporting the campaign from countries including Canada, USA, Australia, South Africa, Hungary, Czech Republic, Slovakia, Mauritius and New Zealand. Love Food Hate Waste is grateful too for the support of some of the UK’s largest retailers and food brands who have provided financial donations to help amplify the week: including Aldi, Danone, Dunbia, KFC, IHG Hotels and Resorts, Ocado, OLIO and Sodexo.

“Throwing good food away is a terrible waste of resources, water and energy. The amount of food we waste each year weighs the equivalent of over a million Asian elephants. Almost 70% comes from our own homes and the impact on the environment is immense.

“Food Waste Action Week is hugely important in bringing together the entire food supply chain, from farm to fork, to take action on this critical issue. There is a lot we can do as consumers, and I would encourage everyone to think about simple and creative ways to help us reach our ambitious target to halve food waste by 2030.”

Top 10 most wasted food and drink items that could have been eaten:

***Those who have some responsibility for the freezer and are not vegan/vegetarian.

Thanks to BioteCH4 (one of the leading Anaerobic Digestion (AD) operators in the UK) for their support in creating this installation. All food waste used was sourced from unavoidable waste delivered into the facility and from WRAP partners for reprocessing and went on to produce green energy and organic biofertiliser for commercial use.

Love Food Hate Waste aims to raise awareness of the need to reduce food waste and help the UK public act. It shows that by doing some easy practical everyday things in the home we can all waste less food, which will ultimately benefit the environment, and our pockets too. Love Food Hate Waste is managed by WRAP.

WRAP is a global NGO based in the UK. It is one of the UK’s top 5 environmental charities and works with governments, businesses and individuals to ensure that the world’s natural resources are used more sustainably. It is the charity leading the UK Plastics Pact (a world first), Courtauld Commitment 2030, Textiles 2030 as well as the citizen campaigns Love Food Hate Waste, Love Your Clothes, Clear on Plastics and Recycle Now. It also runs Food Waste Action Week and Recycle Week in the UK. WRAP works collaboratively and develops and delivers evidence-based, solutions to reduce the environmental cost of the food we eat, the clothes we wear and the plastic packaging we use. Founded in 2000 in the UK, WRAP now works with partners in forty countries, across six continents and is a Global Alliance Partner of The Royal Foundation’s Earthshot Prize.