11th Conference of the Pacific Community

Governor of the Pitcairn Islands, Laura Clarke yesterday spoke on Pitcairn's deep commitment to tackling the scourge of plastic pollution.

Honourable ladies and gentlemen, I am proud to be representing Pitcairn here today, and it is a privilege to listen to such expert and thought-provoking interventions.

Pitcairn is the smallest and most remote of the members of the Pacific Community. Situated in the middle of the Pacific Ocean, halfway between New Zealand and Chile, and two days away by boat from the nearest other human settlement. It has just 50 inhabitants. It is a community that has endured, against the odds, since 1790, and is by necessity a community closely connected to the sea.

And despite its size and location, it is deeply committed to playing its part on these critical global issues under discussion today - and in particular in protecting our oceans, our sea life, and tackling the scourge of plastic pollution.

Pitcairn is proud to be home to an MPA of 835,000km2. The sea life there is extraordinary - when you dock up at Pitcairn, hundreds of sharks come to swim in the lights of the boat.

Henderson Island, one of the three uninhabited Pitcairn Islands, has the highest density of plastic pollution anywhere in the world.

And as I speak we have a scientific expedition underway on Henderson Island, clearing up the plastic, studying it and its impact on the environment, setting up cameras to monitor plastic pollution build up and impact, and highlighting the plight of plastic pollution to the wider world.

It is still underway, but to date the team have cleared 5 tonnes of rubbish and cleared 2.3km of beach. And the science outcomes will include data on ocean temperatures, depth and sea bed sampling; underwater footage of the coral reefs; a research paper on hermit crabs; data on the effect of plastic pollution on turtle nesting sites.

And of course amazing footage and reporting - through newspapers, social media and the National Geographic - highlighting the scale of the problem and helping to galvanise action to tackle plastic pollution.

We will share the outcomes of the expedition - in terms of science and communications -with our Pacific Community partners. 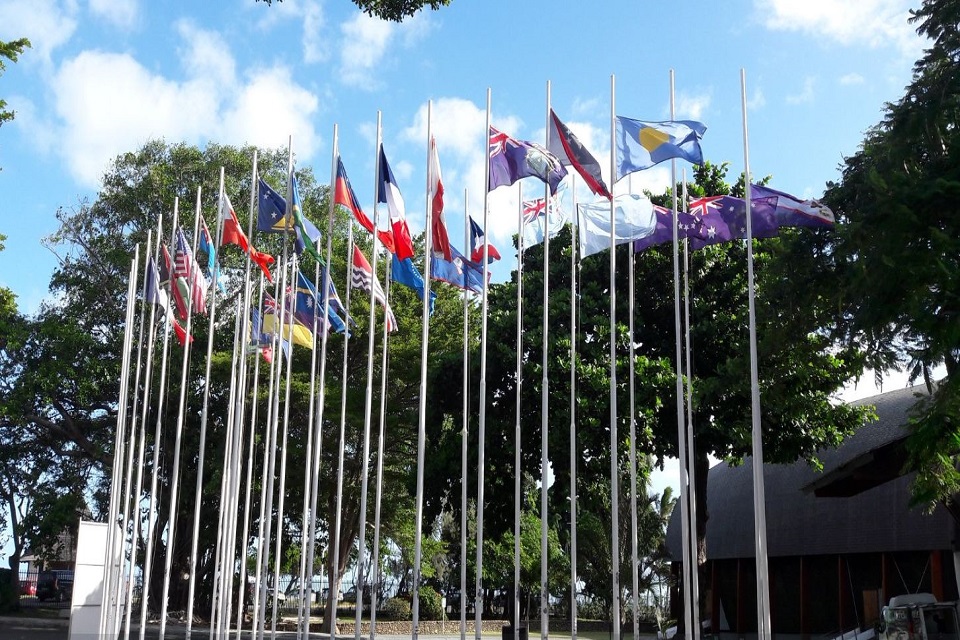 Flags of the Pacific Community

Ladies and Gentlemen Pitcairn is, of course, a territory of the United Kingdom, and I want to use the floor briefly to highlight our bid for a UK Presidency of COP26, in partnership with Italy. The UK and Italy have a strong track record of high ambition on tackling climate change - the UK recently became the first major economy to legislate for net zero emissions by 2050.

Our Presidency will encourage the highest possible ambition through COP26, and focus on tangible actions to deliver on the Paris agreement. We will champion robust science as the basis for global climate action. We will have a prioritise youth engagement - as it is the youth and those not yet born who will bear the brunt of climate change impacts. And we will put Small Island Developing States - and in particular the Pacific - at the heart of our Presidency, in recognition that these countries are on the frontline of this existential crisis facing our climate and our oceans.

Foreign Secretary on the situation in Xinjiang and the Government's response

UK publishes Adaptation Communication to fulfil a key commitment of the Paris Agreement.

British Ambassador to Egypt signs agreement with Egypt’s Assistant Foreign Minister for Europe, to strengthen political and trade ties between the two countries.

The UK has signed a Partnership, Trade and Cooperation Agreement with North Macedonia.

The UK's Ambassador to the WTO in Geneva, Julian Braithwaite, delivered this statement during the WTO Thailand Trade Policy Review.

The UK's Ambassador to the WTO in Geneva, Julian Braithwaite, yesterday (17 November 2020) delivered this statement during the WTO Joint Initiative on E-Commerce plenary session.

Prime Minister confirms that more than 4.3 million sq km of some of the world’s most precious marine environment will be protected.