Six men have been jailed for a total of 133 years after a National Crime Agency investigation uncovered their role in the supply of cocaine and a separate plot to torture and rob a Manchester man.

The crime group – some of whom used encrypted messaging service EncroChat – were all involved in supplying drugs worth almost a quarter of a million pounds. 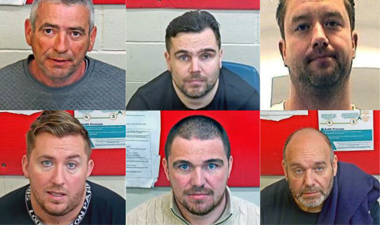 Five of the men also conspired to commit a robbery in which they planned to tie up the victims at their home and cut off the ear of one of them.

The NCA captured covert recordings of Gary Betts, 57, of Rye Bank Road, Firswood, Manchester, as he told associates that he had a “nice job” that would be “plenty of dough”.

He was joined by Gerard Boyle, 57, of Eleanor Road, Manchester; brothers Chris and John Sammon, aged 32 and 35, of Moorcroft  Drive and Dudley Road, Manchester; and Wayne Simmonds, 39, of Oakwood Road, Bricket Wood, Hertfordshire.

The gang believed the victims to be holding a substantial cash sum at their home in Greater Manchester and discussed logistics of the robbery at the office of Boyle – who was the registered director of a plastics recycling firm.

Betts was heard to say: “His dad’s an old man and there’s only one kid in the house…You’ve got to give him a f****** slap …you know what I mean? To tell you where the dough is.”

Simmonds, who used the EncroChat handle ‘peskybull’, agreed to carry out the robbery and discussed having a contact who specialised in impersonating police to gain entry to people’s homes.

Simmonds’ contact had bragged about the emergency blue lights he had fitted to vehicles and was later described by Simmonds during the trial as someone ‘not to be messed with’.

An EncroChat phone was eventually recovered from Simmonds’ property and another man who was involved in the drug conspiracy, 35-year-old William Skillen, from Long Lane in Warrington, was also found to be an EncroChat user, using the handle ‘savagearrow’.

Further conversations between the men indicated they were willing to torture victims to acquire the money.

Betts: “I’d just walk in and I’ll just bang him and just tie him up, and cut his ear off and then tell him…I’ve been down your area and cut people up….Believe me I’ll blowtorch your balls and cut your ear off…Put it this way I know an iron hurts in your chest.”

Betts, Boyle, Simmonds, and the Sammons also discussed drug supply and pricing, including the purchase and sale of around five kilograms of cocaine.

Further searches of both the Manchester business premises where their conversations were recorded, and a property on Sandgate Road, Southampton, linked to Simmonds, led to the discovery of 100 grams of cocaine, drugs paraphernalia including a drugs press and three kilograms of Boric acid.

They were arrested on 11 May last year, along with Skillen.

The men appeared before Manchester Crown Court and were found guilty of all charges on 3 August, following a seven-week trial.

“These men were clearly prepared to inflict shocking levels of violence to achieve their criminal ambitions, which included targeting an elderly man and his family.

“They used a legitimate business premises to plan their drug dealing and it became apparent that their links to this abhorrent trade, which causes violence and exploitation in our communities, were serious and organised.

“Simmonds and Skillen also thought using EncroChat would leave them beyond law enforcement’s reach, but they were wrong. We were monitoring the crime group and took action before they could cause any more harm.

“These sentences show that the NCA, working with partners like the Met Police flying squad and Greater Manchester Police, will relentlessly pursue perpetrators and bring them to justice.”

Improving outcomes for women in the criminal justice system

The Ministry of Justice has made limited progress on its Female Offender Strategy to improve outcomes for women in the criminal justice system because it has not prioritised investment in this work, according to a report from the National Audit Office (NAO).

The National Audit Office (NAO) has found that the BBC is largely on track to achieve its current savings targets, but it is likely to need to make considerable further savings in the coming years, while meeting the challenges of a fall in its audience share and in the number of people buying a licence.

A report by the National Audit Office (NAO) has found that the way private renting is regulated is not effective in ensuring the sector is consistently fair for renters or that housing is safe and secure. The Department for Levelling Up, Housing and Communities (DLUHC) does not yet have a detailed plan to address the problems that renters face.

The Department for International Trade (DIT) has successfully led the delivery of a challenging and intense programme of trade negotiations to a tight timeframe, but it needs to manage potential risks associated with negotiating and implementing multiple trade agreements, according to a new report from the National Audit Office (NAO).

The Bounce Back Loan Scheme: an update

Counter-fraud activity for the Bounce Back Loan scheme was implemented too slowly to be effective and government’s activity to limit taxpayers’ exposure to fraudulent loans is inadequate, according to a report from the National Audit Office (NAO).

Recovering elective and cancer care performance to the standards required will be a huge and lengthy challenge for the NHS, and there is a real risk that the waiting list for patients seeking elective care will be longer in 2025 than it is today, according to analysis from the National Audit Office (NAO).

Kickstart is a large scale intervention, designed at speed to prevent a significant rise in youth unemployment and the long term “scarring” effect this can have on young people’s life chances.

Financial sustainability of schools in England

The National Audit Office (NAO) has found that the financial health of the mainstream school system has held up well in recent years despite funding and cost pressures.

The government’s preparedness for the COVID-19 pandemic: lessons for government on risk management

The COVID-19 pandemic has highlighted the UK’s vulnerability to an emergency that affects the whole of government, society and the economy, and the need to strengthen national resilience to prepare for future risks of this scale, according to the National Audit Office (NAO).