Crop & livestock production is projected to decrease and may even have to be abandoned in parts of Europe’s southern & Mediterranean regions due to the increased negative impacts of climate change, according to a new EEA report.

The study says that adapting to climate change must be made a top priority for the European Union’s agriculture sector if it is to improve resilience to extreme events like droughts, heatwaves and floods.

Adverse impacts of climate change are already being felt across Europe. Extreme weather, including recent heatwaves in many parts of the EU are already causing economic losses for farmers and for the EU’s agriculture sector. Future climate change might also have some positive effects due to longer growing seasons and more suitable crop conditions, but these effects will be outweighed by the increase in extreme events negatively affecting the sector.

’New records are being set around the world due to climate change, and the adverse effects of this change are already affecting agricultural production in Europe, especially in the south. Despite some progress, much more must be done to adapt by the sector itself, and especially at farm-level, and future EU policies need to be designed in a way to facilitate and accelerate transition in this sector,’ said Hans Bruyninckx, EEA Executive Director.

Climate impacts have led to poorer harvests and higher production costs, affecting price, quantity and the quality of farmed products in parts of Europe. While climate change is projected to improve conditions for growing crops in parts of northern Europe, the opposite is true for crop productivity in southern Europe. According to projections using a high-end emission scenario, yields of non-irrigated crops like wheat, corn and sugar beet are projected to decrease in southern Europe by up to 50 % by 2050. This could result in a substantial drop in farm income by 2050, with large regional variations.

In a similar scenario, farmland values are projected to decrease in parts of southern Europe by more than 80 % by 2100, which could result in land abandonment. Trade patterns are also impacted, which in turn affects agricultural income. While food security is not under threat in the EU, increased food demand worldwide could exert pressure on food prices in the coming decades, the report says.

Adaptation at farm level is key

The EU’s adaptation strategy is a key driver of adaptation actions in Europe. One of its objectives is to mainstream adaptation in various EU policies, including the Common Agricultural Policy (CAP). However, adaptation at the farm level often does not take place because of lack of financing, policy support to adapt, institutional capacity and access to adaptation know-how. The EEA report stresses that more knowledge, innovation and awareness raising are required to improve the effective use of the already available adaptation measures, like introducing adapted crops, improved irrigation techniques, field margins and agroforestry, crop diversification or precision farming (see the figure).

These practices should also lead to lower greenhouse gas and air pollutant emissions, better management of soil, land and water resources, which in turn will help preserve local ecosystems and biodiversity. The report also suggests that EU Member States should better prioritise adaptation in the agricultural sector, for example by increasing the financing of adaptation measures through the implementation of the CAP. 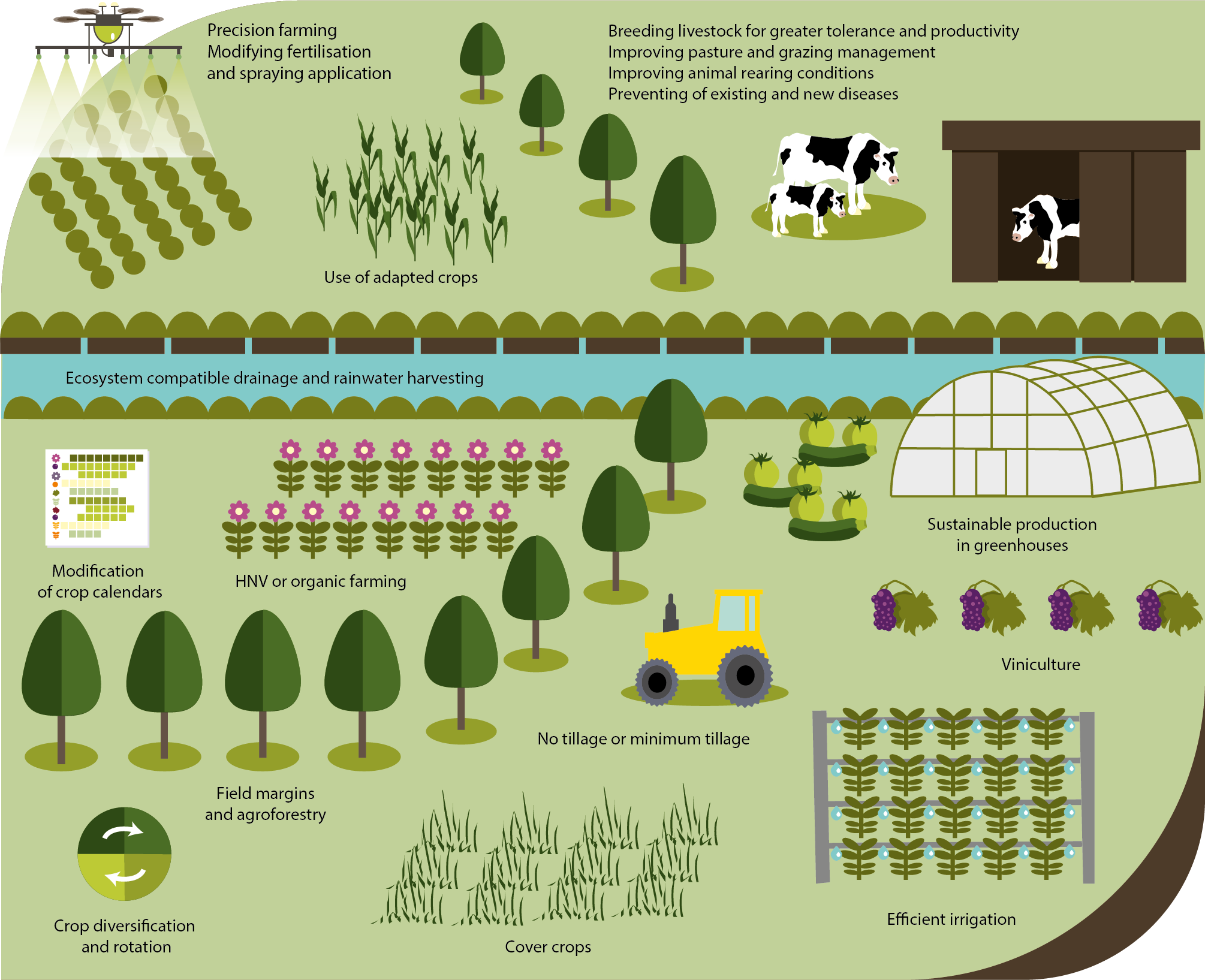 To reduce greenhouse gas and air pollutant emissions, Europe needs to reshape its food system and reduce agricultural emissions from fertilisers, manure storage and livestock. This can be achieved through improvements in fertiliser use, in manure handling efficiencies and in animal productivity through breeding for example. Consumer behaviour will also need to change. Changing diets, like eating less meat and reducing food waste would contribute to additional reductions.

Related to the issue of climate change and adaptation, the European Commission’s LIFE (The Financial Instrument for the Environment and Climate Action programme) published a brochure on adaptation ‘Ready, steady, green!’, which shows how LIFE helps farming and forestry adapt to climate change

Climate change adaptation in the agriculture sector in Europe

The Transport and Tourism Committee will discuss on Thursday at 10:00 CEST the European Commission’s guidance on how to safely resume travel and reboot Europe's tourism.

Europe's moment: Repair and prepare for the next generation

The European Commission yesterday put forward its proposal for a major recovery plan.

The Commission yesterday released its latest report on the EU's Science, Research and Innovation Performance, through which it analyses how Europe performs in the global context.

The Council adopted by written procedure conclusions on raising opportunities for young people in rural and remote areas.

In a new survey commissioned by the European Parliament, a majority (58 %) state they have experienced financial difficulties since the start of the crisis.

Support for innovation in the European car industry: EIB finances Gestamp's RDI strategy to the tune of €200 million

The Spanish multinational Gestamp, which specialises in the development and manufacture of metal components for the automotive industry, is receiving a EUR 200 million loan from the European Investment Bank (EIB) to develop new research lines enabling the production of safer, lighter and therefore more environmentally friendly cars.