Charities and grassroots groups across England have together received more than £21 million in funding since June – thanks to National Lottery players. 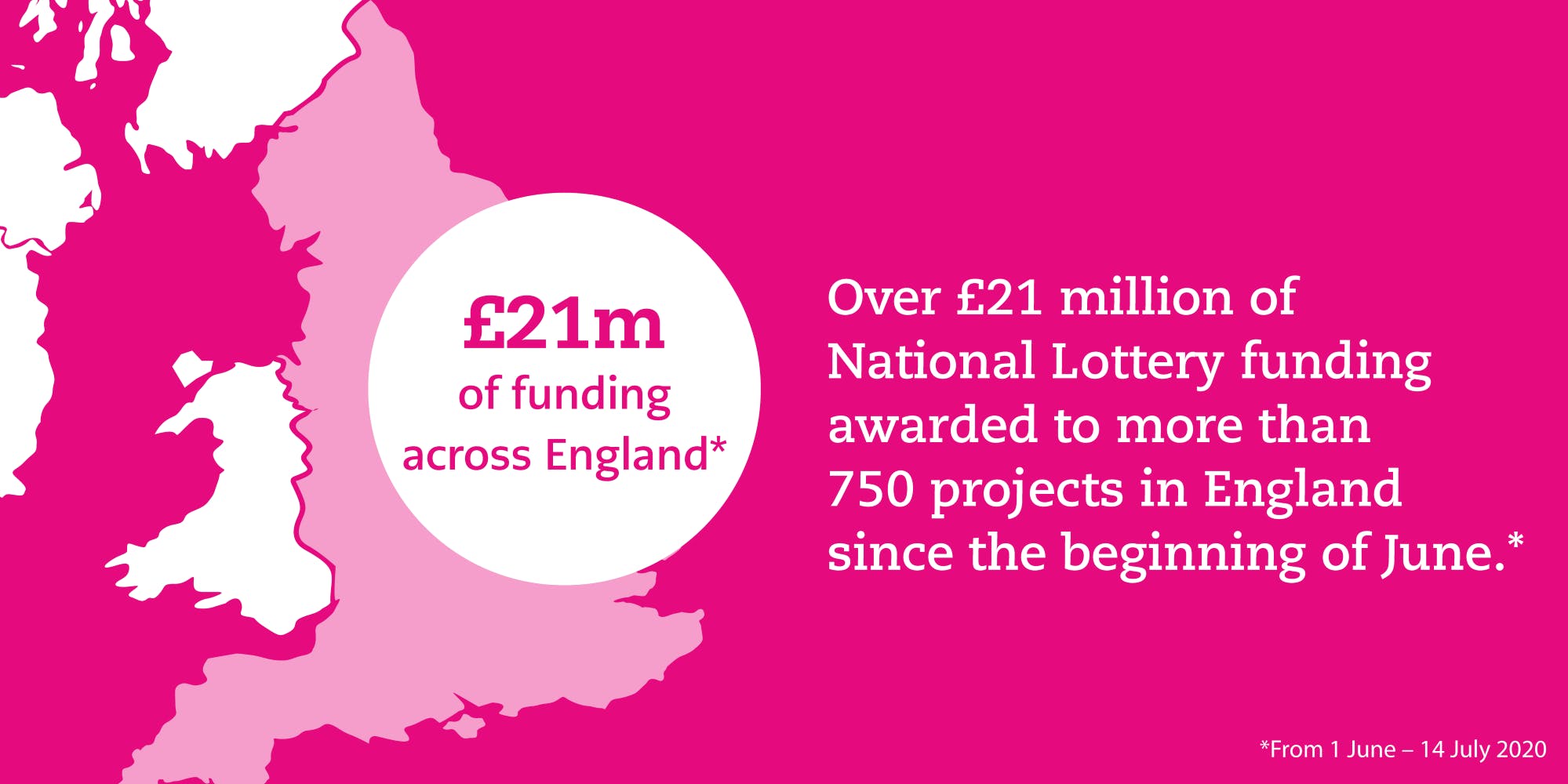 Over £21 million of National Lottery funding awarded to more than 750 projects in England since the beginning of June.

The money, distributed by The National Lottery Community Fund, has reached more than 750 community projects across the nation, funding a wealth of activities and support services – from online music and drama workshops for older people to specialist sessions for those who have experienced domestic abuse and violence.

Funding teams from the largest funder of community activity in the UK have worked hard to get financial support out as quickly as possible as local communities rally to support people during the COVID-19 crisis.

Some organisations used the National Lottery funding to set up online alternatives to services they had previously offered face-to-face or in person. Other groups expanded or launched new programmes of emergency support to help communities through the crisis.

One good cause recently awarded National Lottery funding is Armchair Adventures in Manchester. Thanks to a grant of almost £36,000, it has been able to produce online music and drama workshops for older people experiencing loneliness.

The Albion Foundation in West Bromwich received nearly £50,000 to support disadvantaged and vulnerable young people to return to school after lockdown, by providing specialist seminars on wellbeing, behaviour change, and healthy lifestyles.

Another community group successful in their bid for a National Lottery grant earlier this month is Hopscotch Asian Women's Centre in Camden, London. They were awarded nearly £80,000 to support vulnerable women who are at risk or victims of domestic abuse. Hopscotch offers welfare advocacy and, since lockdown, has reached out to the local community, delivering one-to-one and group sessions online and workshops focusing on positive wellbeing.

“Thanks to National Lottery players, we can continue to support women and families across Camden, at a time when our services are needed the most. We are now able to keep running as a charity through these tough times because of help towards essential salaries - which help us to be there for every BAME woman who needs our frontline services.”

Leo’s Neonatal, which works across the North East and Cumbria, received £30,000 of National Lottery funding to support parents, as well as siblings and grandparents, whose babies are receiving specialist care in hospital neonatal units. The aim is to help treat issues such as PTSD, anxiety and depression – and improve infant mental health and child development – as cases have increased considerably during the pandemic.

“Thanks to National Lottery players, we have been fortunate enough to revolutionise the care we provide at Leo’s and offer a new standard of support which looks after not only the parents or carers, but the babies, the siblings, and the grandparents.”

“The hard work, selflessness, care, and commitment shown by the thousands of groups supporting their communities through these anxious times is truly moving. The money raised by National Lottery players is vital to supporting these community-level responses to the current crisis, and we are heartened to know that our funding is able to help.”

In addition to National Lottery funding, The National Lottery Community Fund has also been responsible since 22nd May for distributing £200 million allocated by the Government to the Coronavirus Community Support Fund in England.

To find out more visit www.tnlcommunityfund.org.uk

£3.1 million National Lottery funding support for communities across Wales, including two gardening projects and getting out and about in Pembrokeshire Coast National Park

Today, The National Lottery Community Fund is announcing the good news that 51 communities across Wales are getting a share of £3.1 million.

The National Lottery Community Fund, the largest funder of community activity in the UK, is pleased to announce that from 28 June, grassroots charities and community groups tackling loneliness in England will be able to apply for a share of £2 million of National Lottery funding to support their work.

I’d been alone, and I’d been lonely, before but this was different

We aren’t just creating things, we are creating a community

This Loneliness Awareness Week (14-18 June), The National Lottery Community Fund, the largest funder of community activity in the UK, is shining a light on the incredible community projects and charities using National Lottery funding to build social connections and tackle loneliness in Gloucestershire.

BLF are delighted to have appointed David Knott as thier Interim CEO.

£10 million grant programme opens today in Wales to improve young people’s mental health in the wake of the Pandemic.

Hundreds of young people from the West Midlands will gain access to new volunteering and employment opportunities as part of the Birmingham 2022 Commonwealth Games – thanks to over £700,000 from The National Lottery Community Fund.

People and communities across Scotland most affected by the pandemic are looking to the future with a National Lottery boost of £11 million announced today (TUESDAY 25 MAY).

The National Lottery Community Fund is spreading good news to 121 communities across Wales receiving a share of £4.1m in its latest round of grant announcements.