All British ‘eye in the sky’ to tackle oil spills, illegal shipping and deforestation

The first images from a new British-made radar satellite which can see earth through clouds and the darkness of night were released recently (23 November 2018).

The first images from a new satellite which can see through clouds and image the Earth round the clock to help stop illegal activity and protect the environment were unveiled recently (Friday 23 November).

Science Minister Sam Gyimah saw the images from the NovaSAR-1, the first Synthetic Aperture Radar (SAR) satellite made entirely in the UK, during a visit to its makers, Surrey Satellite Technology Ltd (SSTL). SAR technology can see through clouds and image the Earth 24 hours a day. Images can be used to detect oil spills and suspicious shipping activity, and monitor deforestation.

The satellite, launched in September, tests a new platform for low-cost satellite imaging. The government invested £21 million to assist the development of NovaSAR-1 and will benefit from access to its data, significantly boosting the UK’s Earth observation capabilities and providing data to start-ups at the Satellite Applications Catapult in Oxfordshire.

The images released recently show Cairo and Sydney Harbour. Cropped images taken from the original picture of Sydney Harbour include Sydney Opera House, Bondi beach and a close-up image shows small boats moored in the natural harbour at Church Point, north of Sydney in a demonstration of the usefulness of SAR for detecting vessels of different sizes and types, particularly at night or through cloud cover.

The image of Cairo shows the River Nile flowing from Upper Egypt through Cairo and down towards Beni Suef. Cropped images taken from the original show The Great Pyramids of Giza, and the Red Pyramid and Bent Pyramid near Dahshur. 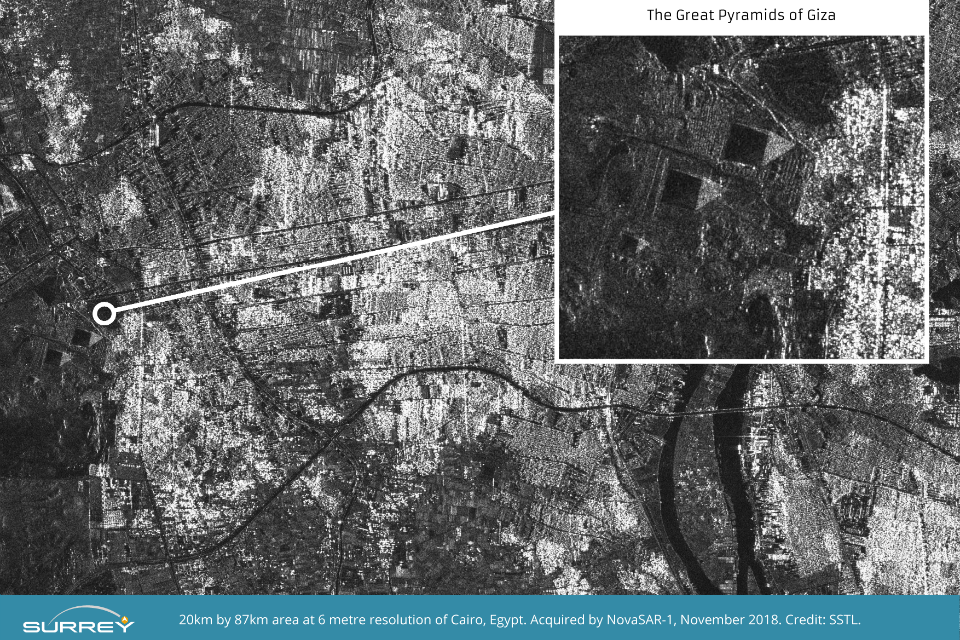 Yet again we can see UK research and innovation that is truly out of this world. This ‘eye in the sky’ can capture an image a dozen times wider than the Strait of Dover and the data it provides can help crack problems from illegal shipping to alerting us to damaging pollution that needs to be countered.

This satellite, backed by a £21 million investment from the UK Government, is a great example of how we are working with the space sector through our modern Industrial Strategy to remain at the forefront of pioneering science and exploration.

The quality of the SAR images we are downloading validate the capabilities of NovaSAR’s innovative low cost S-Band SAR platform and demonstrate successful delivery of valuable data for maritime, agricultural, forestry, ice-monitoring and disaster monitoring applications.

We have worked closely with the SAR experts at Airbus in Portsmouth to develop NovaSAR-1 and the whole team is delighted with these first results - the outcome of space engineering expertise, ingenuity and collaboration. I would like to thank the UK Space Agency for their support and we look forward to starting service delivery in the near future to our mission partners.

NovaSAR-1 has 3 imaging modes that create images with higher definition for precision applications including monitoring disasters and deforestation, and it also has a maritime mode and AIS receiver.

The satellite’s dedicated maritime mode allows it to monitor an area of ocean 400km wide. This allows ships to be detected by radar and compared with their ship tracking data, with discrepancies between the two highlighting potentially illegal activity.

NovaSAR-1 was entirely made in Britain, being designed and manufactured by SSTL, with an SAR payload developed by Airbus Defence and Space in Portsmouth and an Automatic Identification Receiver supplied by Honeywell Aerospace. NovaSAR-1 is operated in orbit from SSTL’s Spacecraft Operations Centre in Guildford UK.

The government is backing the space sector by working in partnership with it through its modern Industrial Strategy, which includes major initiatives such as the National Satellite Test Facility at Harwell and the development of the proposed commercial spaceport in Sutherland, Scotland. The UK continues to be a leading member of the European Space Agency, which is independent of the EU. Last week (Monday 19 November) Business Secretary Greg Clark announced that Airbus will assemble satellite components and major parts in the UK for Eutelsat in a new multi-million-pound deal signed at the Department for Business, Energy & Industrial Strategy. The deal will support hundreds of high quality jobs in Portsmouth and Stevenage and thousands of jobs in the supply chain - a further vote of confidence in the UK’s future economy and growing space industry.

The UK is a world leader in Earth Observation technologies, which have an increasing number of down to Earth applications including through the UK Space Agency’s International Partnership Programme (IPP). This programme harnesses the expertise of the British space sector to tackle problems all around the world, from predicting dengue fever outbreaks in Vietnam to improving healthcare in Nigeria through satellite connectivity. Earth Observation satellite services are estimated to support industries representing a total turnover of more than £235 billion.

A competition has also been launched to appoint further board members.

UK-Japan relationship in nuclear science boosted by robotics and automation.

Business Minister Paul Scully is urging businesses who have not yet taken steps to prepare for the UK’s new start to act now.

Business Minister: employers have a duty to spot early signs of domestic abuse

Business Minister Paul Scully calls on employers to ensure their organisation is spotting signs of domestic abuse and helping their staff find the right support.

Business Secretary Kwasi Kwarteng hosted a series of calls with business leaders on his first day in office.

Whisky gets into the spirit of building back greener

The investment will equip the UK’s leading scientists, universities and research institutes with new state of the art equipment to drive forward research