Setting out Britain’s determination to remain a world-leader in the combat air sector, Defence Secretary Gavin Williamson yesterday reveiled a concept model of a brand-new, next-generation fighter jet as he launched a comprehensive strategy with a bold statement of intent for future British air power.

Announcing the publication of the new Combat Air Strategy at the Farnborough International Airshow, the Defence Secretary said he had taken action to strengthen the UK’s role as a global leader in the sector and to protect key skills across the UK industrial base.

He outlined the Strategy in front of the combat aircraft concept model which has been developed by UK industry in collaboration with the Ministry of Defence – being publicly unveiled for the first time, it acts as a powerful demonstration of the UK’s world leading technical capability and industrial expertise.

We have been a world leader in the combat air sector for a century, with an enviable array of skills and technology, and this Strategy makes clear that we are determined to make sure it stays that way. It shows our allies that we are open to working together to protect the skies in an increasingly threatening future - and this concept model is just a glimpse into what the future could look like.

British defence industry is a huge contributor to UK prosperity, creating thousands of jobs in a thriving advanced manufacturing sector, and generating a UK sovereign capability that is the best in the world.

Today’s news leaves industry, our military, the country, and our allies in no doubt that the UK will be flying high in the combat air sector as we move into the next generation. 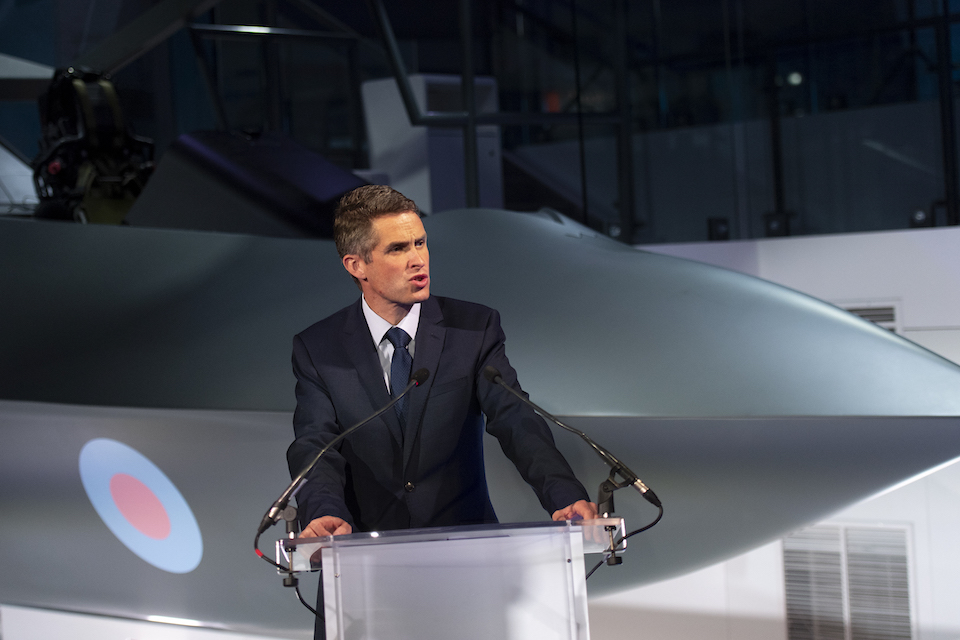 For the last 100 years the UK combat air industrial sector has ensured the UK has been at the forefront of technological and engineering developments, delivering world leading capability to the RAF and our allies. This Strategy will ensure the UK continues to maintain this leading position.

The Strategy outlines the way in which the UK will acquire future Combat Air capabilities to maximise the overall value the UK derives from the sector. The framework will balance military capability, international influence, and economic and prosperity benefit along with the overall cost.

It reinforces the commitment in the 2015 Strategic Defence and Security Review to deliver the Future Combat Air System Technology Initiative (FCAS TI). The Government, in partnership with industry, is taking steps to grow existing world-leading design engineering capacity and skills, ensuring that the UK continues to be at the cutting edge of combat air technology.

The concept aircraft has been put together by British firms including BAE Systems, Leonardo, MBDA and Rolls-Royce, which have joined together with the RAF Rapid Capabilities Office to form ‘Team Tempest’ to pursue the opportunity.

The MOD will now set up a dedicated team to deliver the combat air acquisition programme. They will deliver a business case by the end of the year, and have initial conclusions on international partners by next summer – with engagement with potential partners beginning immediately.

Early decisions around how to acquire the capability will be confirmed by the end of 2020, before final investment decisions are made by 2025. The aim is then for a next generation platform to have operational capability by 2035.

The UK is already a world-leader in the combat air sector, with a mix of skills and technologies unique in Europe, supporting over 18,000 highly skilled jobs. The sector delivers a turnover in excess of £6bn a year and has made up over 80% of defence exports from the UK over the last ten years.

Investment in combat air technology, combined with the strengths of UK industry, has resulted in the UK being the only Tier 1 partner with the US on the F-35 Lightning II programme, with British industry delivering 15% by value of every F-35 built. The UK has been able to help define the operational capabilities of the aircraft, while reinforcing UK industrial capability, critical skills and supporting wider economic prosperity.

The UK also continues to lead the way in combat air power as one of the four partner nations in the Eurofighter Typhoon programme. With more than 20,000 flying hours on deployed operations to date, the Typhoon delivers world leading capability, unparalleled reliability and proven interoperability with our allies. The MOD will continue to invest in the Typhoon for decades to come, with the best technologies being carried forward on to next-generation systems.

The F-35 Lightning II and the Typhoon are two complementary multi-role combat aircraft that will make up the RAF’s combat air fleet, placing the UK at the forefront of combat air technology - with the Typhoon expected to remain in UK service until at least 2040. 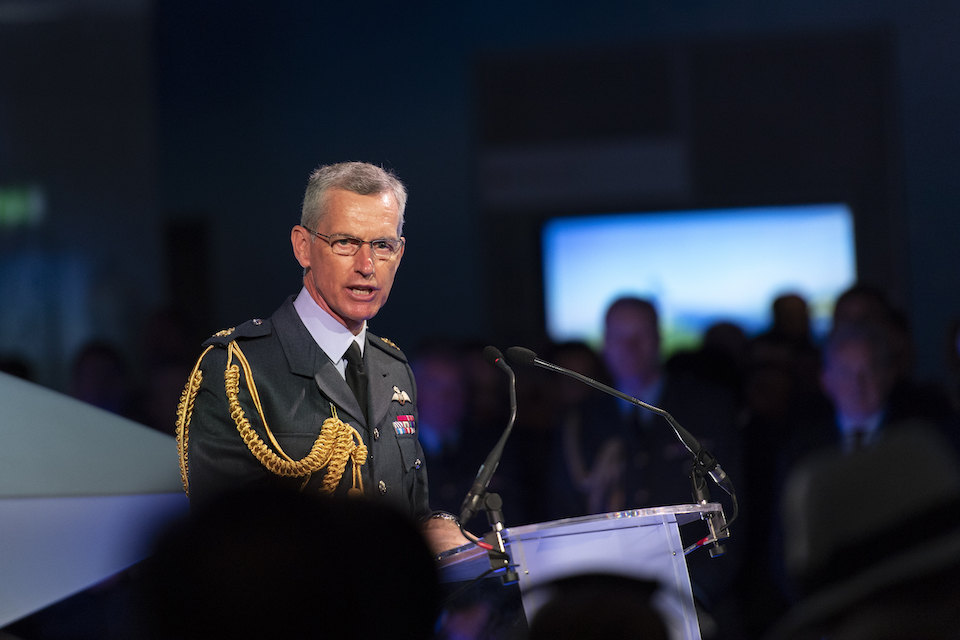 The Combat Air Strategy will bring together the best of our people, industry and international partners to support the RAF lift-off into the next century of air power. Team Tempest demonstrates our commitment in ensuring that we continue to build our capabilities, draw upon our experience and history to bring forward a compelling vision for the next generation fighter jet. In last 100 years, the RAF has led the way and today’s announcement is a clear demonstration of what lies ahead.

The UK’s combat air capability, built by generations of committed and highly skilled people through a century long partnership between the RAF and industry, is admired the world over. The UK Government’s Combat Air Strategy is a powerful statement of intent to invest in next generation combat air systems. We’re proud to play a key role in this important programme, with our world leading technology, capability and skills, which will contribute to the UK’s defence and prosperity for decades to come.

As the UK’s long-term power and propulsion partner, we warmly welcome the Government’s announcement of a Combat Air Strategy. The UK’s capability in combat air power and propulsion is at a critical point and this long-term commitment from Government will allow us to protect the expertise and key skills that are vital to retaining sovereign capability. It ensures that we are able to develop and deliver the advanced technologies that will be required in future combat air systems to help ensure our national security.

Norman Bone, Chairman and Managing Director of Leonardo in the UK, yesterday said:

As Britain’s national champion for advanced defence electronics, we are proud to be a part of Team Tempest. Work we have conducted under research and development programmes such as FOAS and FCAS has significantly advanced our thinking with regards to the complex electronics required for future air combat scenarios and we stand ready to support the future needs of the Royal Air Force. We are excited about the work that’s already been done, and the work still to do, on the FCAS TI programme and are all set for these activities to feed into the Typhoon successor programme.

MBDA is proud to be providing its complex weapons expertise to the Team Tempest partnership. Delivering effects is central to next generation combat air systems, and we will continue to invest in developing our world leading complex weapons and novel technologies to ensure the UK retains sovereign operational advantage and freedom of action in Combat Air. The strong partnership (through the Portfolio Management Agreement) between MBDA and the MoD has already changed the paradigm for complex weapons developments in the UK, delivered world leading capabilities to the UK Armed Forces and provided savings in terms of both time and money. The Team Tempest partnership has the potential to do the same for Combat Air.

A UK task force has arrived in Mali to join the UN peacekeeping mission where they will provide a reconnaissance capability.

Baroness Goldie's speech at the 25th Conference of States Parties to the Chemical Weapons Convention in The Hague.

The UK and France reaffirmed their long-standing defence relationship yesterday by committing to a joint programme for Autonomous Minehunting Systems that will detect and neutralise mines around the world.

Following the announcement that the Atomic Weapons Establishment plc will become an Arms-Length Body of the MOD, the Department has decided to appoint Sir John Manzoni as Chair Designate.

HMS Lancaster has completed three days of operations in the High North, marking the second time the Royal Navy has sailed into the Arctic Circle in two months.