Ofcom’s Home Broadband Performance Report reveals how broadband speeds changed before and after the lockdown measures came in – when there was a surge in broadband use. Download and upload speeds fell only by 2% and 1% respectively. [1]

Demands on the broadband network have been driven in part by home working and by school closures, leading to a rise in people using streaming and educational services. Some providers have reported an increase in weekday daytime traffic of between 35 and 60% since the coronavirus restrictions came in. [2]

As children and adults look for ways to entertain themselves indoors, Netflix download speeds fell by 3% in the lockdown period compared to pre-lockdown – indicating that people rushed to catch-up with their favourite shows in their free time. But data use from increased screen time was offset by Netflix reducing the streaming quality of its content.

The responsiveness (latency) of broadband networks – the delay between a connection requesting an action and that action taking place – also remained stable. The 2% increase in delay measured would have had little effect on performance for most people.

The report also reveals that broadband speeds in rural areas are catching up to those in towns and cities. The proportion of rural lines receiving at least superfast broadband (30 Mbit/s and above) during peak times continues to increase – from 44% in 2018 to 56% in 2019 – while the proportion not  receiving a decent connection (10 Mbit/s and above) at peak times fell from 33% to 22%.

But broadband speeds in rural areas still lag behind those in urban areas. Urban peak-time speeds reached 75 Mbit/s, almost double the rural average of 39 Mbit/s in 2019.

“Broadband in the UK has really been put to the test by the pandemic, so it’s encouraging that speeds have largely held up. This has helped people to keep working, learning and staying connected with friends and family.”

Ofcom’s Stay Connected campaign includes a range of tips to help ensure people get the best out of their internet connection during the coronavirus period: 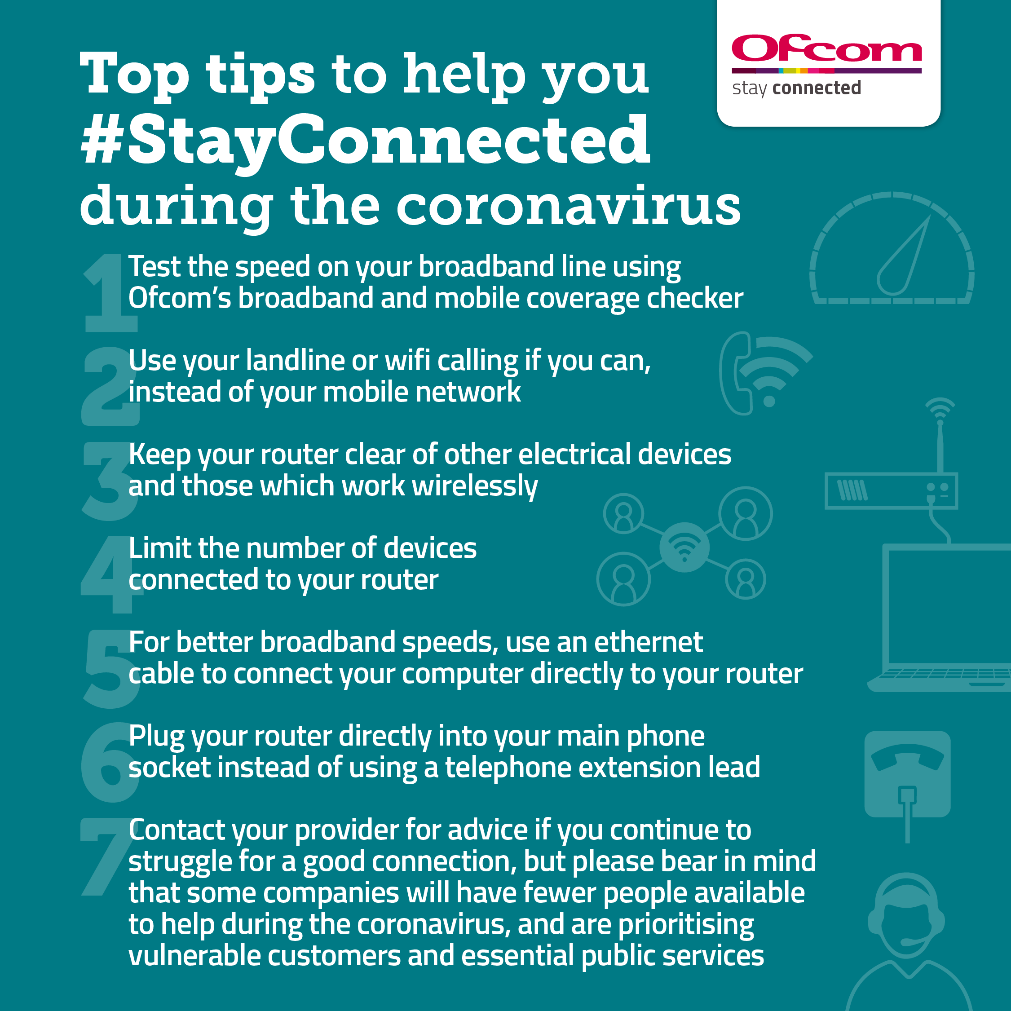 For more information, see our guides on getting the most out of your broadband and mobile services at home.

We have also published our Connected Nations spring update, which provides a summary of broadband availability and mobile coverage in the UK as of January 2020, before the outbreak of Covid-19 in the UK. This shows that:

Ofcom is to investigate Channel 4, following an extended outage last year of its subtitling, signing and audio description services.

The big tech developments to watch out for in 2022

We’ve all lived through an unpredictable couple of years, but in the fast-moving and ever-changing technology world, it’s important to look ahead and consider what we think might be the major developments coming down the line over the next 12 months.

Applications have opened for the third round of small-scale DAB radio multiplex licences for 25 areas across England, Northern Ireland, Wales and Scotland.

Telecoms price rises – could you get a better deal?

Ofcom’s consumer advocate and Group Director, Lindsey Fussell, gives the lowdown on telecoms price increases and what to do about them.

Struggling to afford your phone or broadband service? A 'social tariff' could help

If you're having difficulty paying for your phone or broadband service, don’t ignore it. You should speak to your provider as soon as possible to see how they might be able to help you.

Ofcom has issued ITV with guidance after it broadcast inaccurate information provided by Dr Hilary Jones on the proportion of unvaccinated Covid-19 patients in hospital.

How technology can help you beat the scammers

There are steps we can take to protect ourselves from scams, or to report them if we fall victim to one.

Adam Baxter, Director, Standards and Audience Protection, looks back at a record year for television and radio complaints.