Broadband, phone and pay TV firms must tell customers about their best deals

Broadband, phone and TV customers must be told when their contract is coming to an end, and shown the best deals available, under new rules announced today by Ofcom.[1]

Ofcom wants customers to be able to take advantage of choice in broadband, phone and TV, and get the best deals for their needs. This could be by switching provider or agreeing a new deal with their existing one.

To help people do this, we are requiring broadband, TV, mobile and home phone companies to send their customers the information they need about their contract, when they need it, so they can choose the best package for them.[2] These protections are the latest in Ofcom’s Fairness for customers programme.

Our research shows that more than 20 million customers have passed their initial contract period. Many of these could be paying more than they need to.

People who bundle their landline and broadband services together pay, on average, around 20% more when they are ‘out of contract’. This rises to 26% among customers who bundle their pay TV with these two services.

Therefore, Ofcom has stepped in to ensure fairness for customers, by forcing telecoms and pay TV companies to warn customers between 10 and 40 days before their contract comes to an end. These alerts will be sent by text, email or letter.[3] They will include:

People who choose to stay with their provider without signing up to a new contract will be sent a reminder every year about their firm’s best deals.

“We’re making sure customers are treated fairly, by making companies give them the information they need, when they need it.

“This will put power in the hands of millions of people who’re paying more than necessary when they’re no longer tied to a contract.”

The changes will involve providers sending personalised and tailored information to millions of individual customers. To make sure they get this right, companies will have nine months to make the necessary changes to their systems and processes. Customers will start receiving the notifications from 15 February next year.

Our Fairness for customers campaign has also recently introduced:

On 1 July 2019, new rules will come into effect that will make it quicker and easier to switch mobile provider. 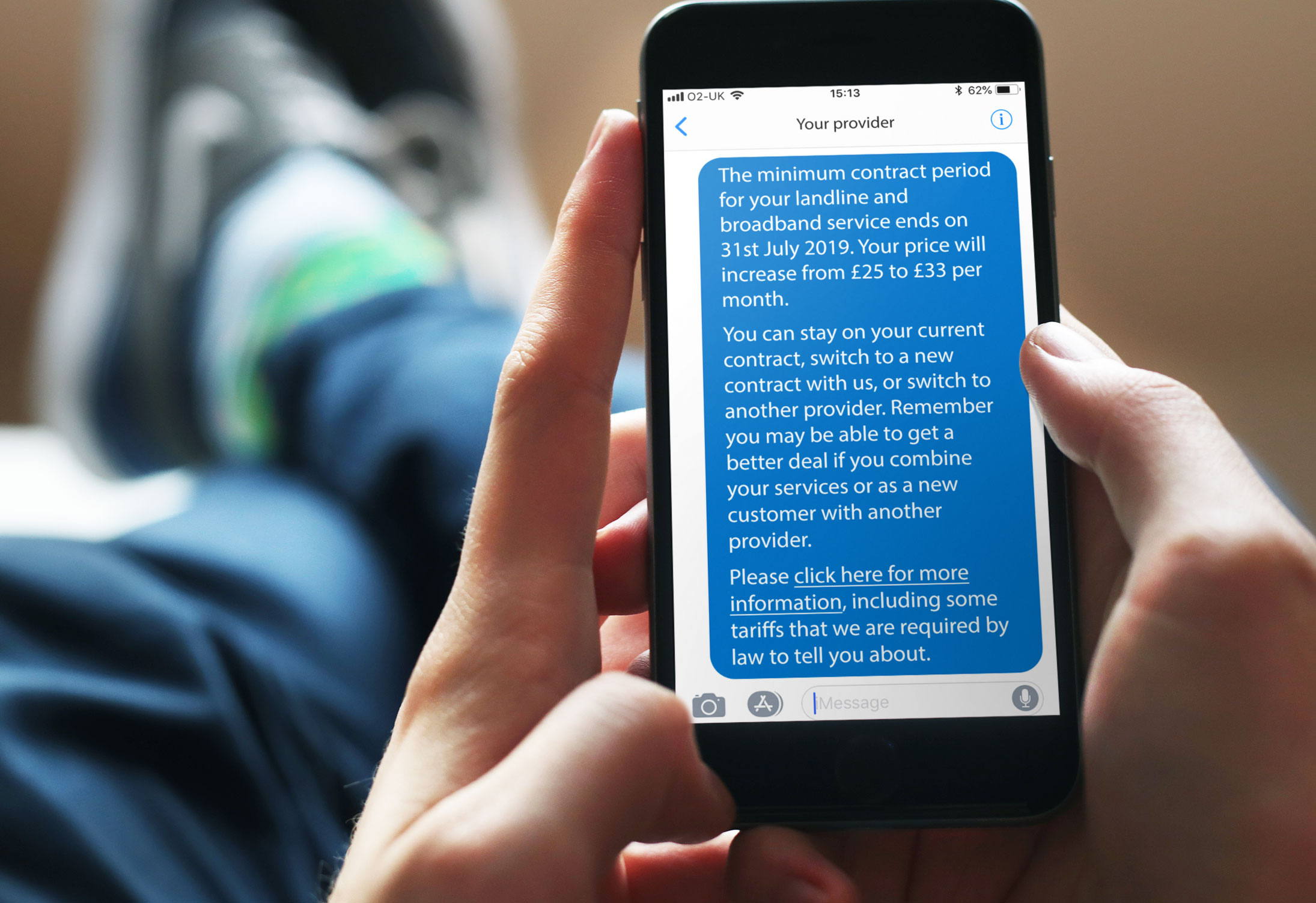 People taking part in TV and radio programmes must be properly looked after by broadcasters, under new rules introduced by Ofcom.

Over a quarter of a million homes in Wales can now access full-fibre broadband – fast, reliable connections that are fit for the future – Ofcom has found.

The Government has appointed Maggie Carver as Ofcom’s interim Chair from 1 January 2021, following the departure of our current Chairman Lord Burns at the end of this year.