The Chief of Defence Staff has visited DMS Whittington, in Staffordshire, to officially open the new head office of the Defence Infrastructure Organisation (DIO).

The Chief of Defence Staff has visited DMS Whittington, in Staffordshire, to officially open the new head office of the Defence Infrastructure Organisation (DIO). The co-location of DIO with its Armed Forces customers not only brings benefits for working relationships, but also strengthens Staffordshire’s position in supporting UK Defence.

St George’s House has been purpose-built to accommodate more than 550 Ministry of Defence (MOD) staff who have relocated to the site following the closure of DIO’s former home in Sutton Coldfield. The Sutton Coldfield site was closed under the Defence Estate Optimisation Portfolio, which aims to modernise the defence estate over the next 25 years and will invest £4.3 billion in new facilities over the next decade. The money raised by the sale of previous head office will be reinvested in defence. 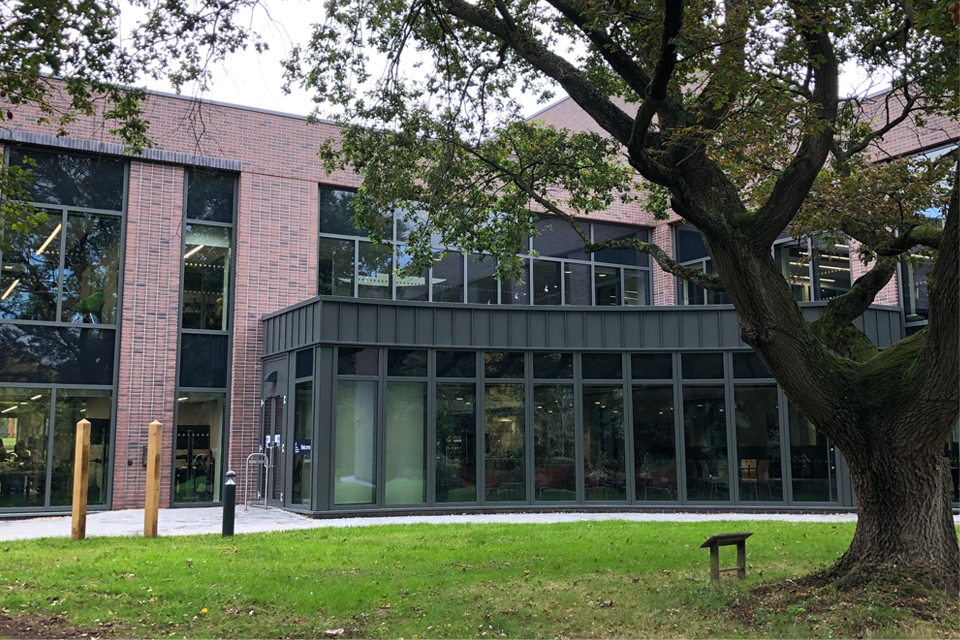 The new building not only offers a modern working environment, but has also been designed to reduce carbon contribution through the use of renewable energy, low water usage systems, improved insulation and electric car-charging points. An area outside has been planted with wild grasses to encourage natural wildlife.

All of the building’s energy requirements come from renewable energy sources, with half provided by rooftop solar panels. The panels generate enough electricity to power five houses and will reduce CO2 emissions by nearly 29,000kg annually, the equivalent of eight flights from London to New York. Overall, these and other measures are predicted to reduce building running costs by £18 million over the next 25 years.

Additionally, the building was designed around an oak to avoid needing to fell the tree, which was planted by the Cheshire Regiment as a sapling in about 1969. The sapling is believed to originate from a tree grown from an oak sprig given to the 22nd Regiment of Foot. They were predecessors to the Cheshire Regiment and were given the oak sprig by King George II in gratitude for saving him from capture at the Battle of Dettingham in 1743.

We have moved from an old site in Sutton Coldfield, and are looking forward to DIO being part of the Defence community at DMS Whittington. This is a vibrant modern site and we’re happy to join other progressive Defence organisations here.

DIO makes a significant contribution to the readiness and resilience of the Armed Forces, enabling them to live, work, train and deploy at home and overseas. DIO is also leading Defence’s approach to Net Zero. Mitigating emissions from the estate and making it increasingly sustainable – these are vital contributions to all our futures.

DIO’s new head office is a great example of smarter ways of working and of effective teamwork. I look forward to it becoming a recognised exemplar of a modern and inclusive working environment and a home to infrastructure specialists.

I am delighted to extend the very warmest of welcomes to the Defence Infrastructure Organisation to DMS (Whittington). Joining our community provides tremendous opportunities to collaborate, deepen relationships and develop a greater understanding of each other as one community serving our Armed Forces.

DMS (W), fondly referred to by the local community as Whittington Barracks, has a longstanding military history dating back to 1875. Already home to the Defence Medical Academy, the Headquarters Defence Medical Services Group, the Army Recruitment Assessment Centre, the Staffordshire Museum and the Mercian Regiment Headquarters; DIO joining our community will only serve to further cement Staffordshire’s position in support of UK Defence.

I look forward to continuing to work closely with DIO colleagues and know that you will join me in extending a warm welcome to our community.

The construction contract was awarded to Kier, with work commencing in January 2020 and completing in August 2021. The £12 million project covered the demolition of an existing building, construction of the new head office as well as a new secure car park with 230 additional spaces.

The Reserve Forces’ and Cadets’ Association (RFCA) for Wales welcomed more than 130 guests to its Annual Briefing.

The British Army has unveiled ‘Future Soldier’, its most radical transformation programme in over 20 years.

The new squadron will deliver training to British and Qatari pilots.