Climate scientists have been beginning to assess which regions are already affected by multiple increases in extreme weather events and other climate change impacts.

A new analysis by the Met Office - which builds on work by the Intergovernmental Panel on Climate Change (IPCC) and other sources - has looked at six types of extreme event and climate change impact and tried to assess overlapping trends across different regions of the world.

The trend data has been collated into a series of seven maps: one each for the six types of climate extreme or impact; and a composite map showing the number of cumulative extreme events and change impact for each region.

Examples of impactful extreme events attributed to human-caused climate change have also been included, with statistics on losses of human lives and biodiversity, and economic damages. 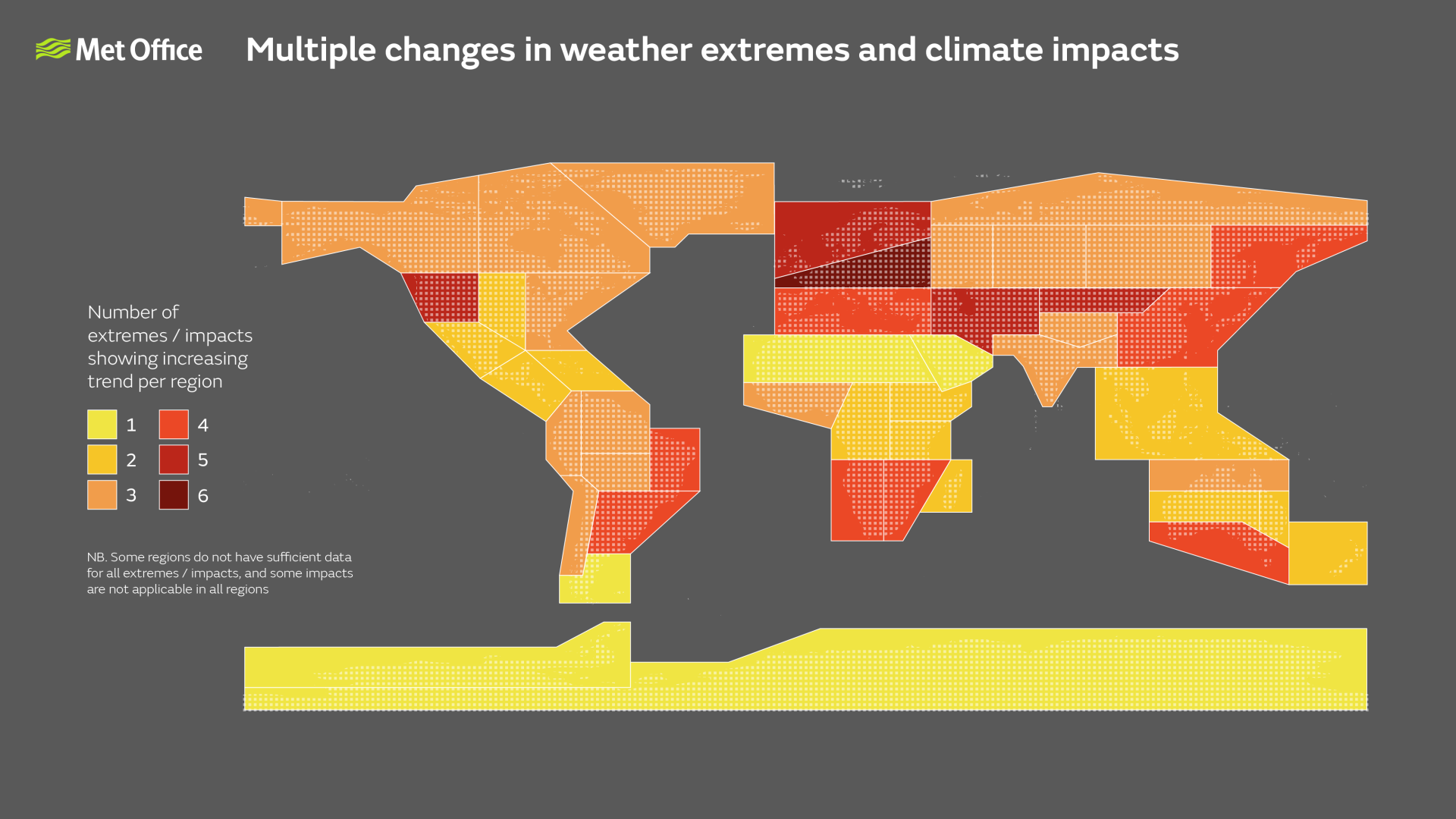 Prof Richard Betts MBE, who is Head of Climate Impacts Research at the Met Office and University of Exeter, led the study. He said: “It is clear from our analysis that all regions of the world are experiencing increases in extreme weather or other impacts of climate change, and these are costing lives and causing widespread environmental and economic damage.”

The six categories covered in the study are:

Professor Betts continued: “Nearly all regions are suffering multiple impacts, including many in the Global South with the least historical responsibility for climate change. All inhabited continents have regions seeing at increases in at least four of the six extremes or impacts assessed, and in many cases this could be an underestimate due a lack of data. This highlights the need for the world to work together on urgent action both on emissions reductions and adaptation.”

Increases in extreme high temperatures is the factor affecting most of the study’s 46 regions; at least 40 are affected.

The northern European region, which includes the UK, is affected by at least five of the six factors, except agricultural drought. Richard Betts added: “Although the data is unclear about whether this region has yet seen a long-term trend towards more agricultural drought, it is beyond doubt that this summer, farmers across the region, including in the UK, have been hit hard by extreme weather, including the prolonged drought.”

From 2020 the list includes the following global extreme weather and climate change impacts.

Record high temperatures of over 40°C across wide areas of England. Over 1000 excess deaths in over-65s. 13 deaths due to drowning. Widespread disruption to railway network. Multiple wildfires, numerous private houses destroyed. London Fire Brigade had busiest day since Second World War. Event would have been 4°C cooler in pre-industrial times.

Record temperature for Canada of 49.6°C. 1,400 excess deaths in USA and Canada. Extensive wildfires, disruption to rail and road infrastructure, flooding due to rapid snowmelt. Extreme heat at this level is virtually impossible without human-caused climate change.

Flooding due to very heavy rainfall over 1-2 days. At least 243 deaths. Daily rainfall increased by up to 19% by climate change

Increased evapotranspiration due to warming has caused a a 13% decrease in flows in the Colorado River. Tier-1 water shortage declared for the first time ever in 2021, restricting water extractions.