The deal with Lockheed Martin will see the start of manufacturing on the new Crowsnest system. It will act as the eyes and ears for the Royal Navy’s ships, providing long range air, maritime and land detection and tracking capability.

Crowsnest will provide a vital intelligence, surveillance and tracking system for our new Queen Elizabeth Class aircraft carriers, capable of detecting any potential threats at sea.

Backed by our rising Defence budget, and our £178 billion equipment plan, Crowsnest will help keep our Armed Forces safe as they deploy in every ocean around the world for decades to come.

Crowsnest will be fitted to the Merlin Mk2 helicopters, which already perform a number of important roles for the Royal Navy, including detecting submarines and undertaking humanitarian aid duties – most recently in helping with part of the coordinated response to the migrant crisis in the Mediterranean. 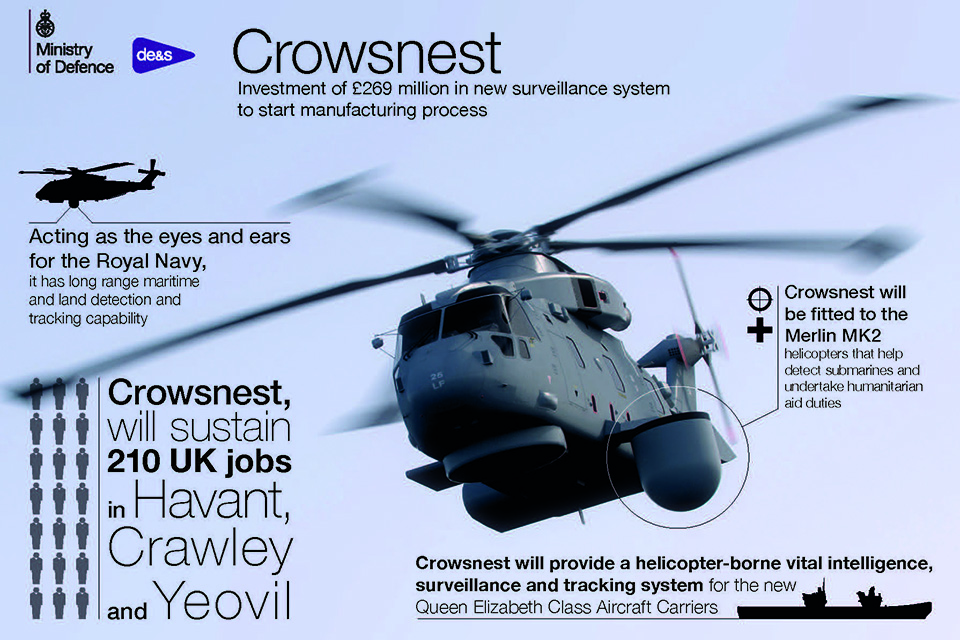 The Crowsnest System will be the eyes and ears of the Royal Navy. Copyright Aircraft Carrier Alliance/Crown

Crowsnest is an important step in the ambitious carrier programme and will form an integral part of the Carrier Enabled Power Projection (CEPP) capability, which will deliver the two Queen Elizabeth aircraft carriers – the largest warships ever built for the Royal Navy – from which the UK’s new F-35 Lightning II jets will fly.

Under the deal with Lockheed Martin, Thales UK has been subcontracted to provide the system, work on which will sustain over 200 UK jobs in Crawley, Havant and Yeovil.

The Minister made the announcement on board the Type 45 Destroyer HMS Dragon at HMNB Portsmouth, where final preparations are underway for the arrival of the two 65,000 tonne carriers.

Improvements to the dockyard include:

Lockheed Martin, as the prime contractor for Crowsnest, will integrate the selected Thales solution on to the Merlin Mk2 helicopter fleets. This work will be supported by Leonardo Helicopters, who will modify the fleet to fit Crowsnest. The contract also includes £9 million for initial provisioning of spares to support the Crowsnest system during training and operational deployment.

Crowsnest will play a key role in protecting the Royal Navy’s future fleet acting as the eyes and ears for the new Queen Elizabeth Class aircraft carriers. This state-of-the-art project will demonstrate how we are providing world-leading, innovative equipment to our Armed Forces.

This contract will also sustain hundreds of UK jobs in the process, highlighting how the MOD, through DE&S, can create a positive and collaborative partnership with industry, benefitting both our Armed Forces and the UK economy.

The Thales solution is an updated and improved version of the Cerberus tactical sensor suite, currently in service on the Sea King Mk7 helicopter.

The design is comprised of a single mechanically scanned radar head, which uses an innovative system to provide 360 degree visibility from the underside of the helicopter, which then folds up to the side of the aircraft when not in operation.