The Defence Secretary has met with NATO counterparts in Brussels to discuss how the alliance can tackle evolving security challenges.

Ben Wallace travelled to NATO HQ to discuss emerging technologies and non-conventional warfighting with fellow defence ministers, and agreed plans to ensure that NATO forces are ready to respond at short notice.

Ministers also discussed the situation in north east Syria, as well as the ongoing missions in Iraq and Afghanistan.

At the final Defence Ministerial before the Leaders’ Meeting in December, the Defence Secretary hosted a discussion with his Ukrainian counterpart and the ‘Quint’ Group; the US, Canada, Lithuania and Poland. He held bilateral meetings with his German, French, Danish, Italian, Swedish, Turkish and Georgian counterparts.

I am delighted to be attending my first NATO Defence Ministerial. We have discussed a range of important topics, from emerging technologies such as Artificial Intelligence and hypersonic missiles, to the valuable work on security sector reform in Iraq.

Battlefield techniques are advancing rapidly, with our adversaries using increasingly varied methods to disrupt the international rules-based order. As an alliance we face complex security challenges, but NATO will continue to play a vital role in keeping the world safe and acting as a force for stability.

I look forward to the UK hosting NATO leaders in December, where we will celebrate NATO’s 70th anniversary and discuss how to further strengthen the alliance.

During the event, the Defence Secretary also presented NATO’s Secretary General, Jens Stoltenberg, with a poppy, on the day that the Royal British Legion launched their 2019 Poppy Appeal, marking the sacrifice and service of the armed forces community. 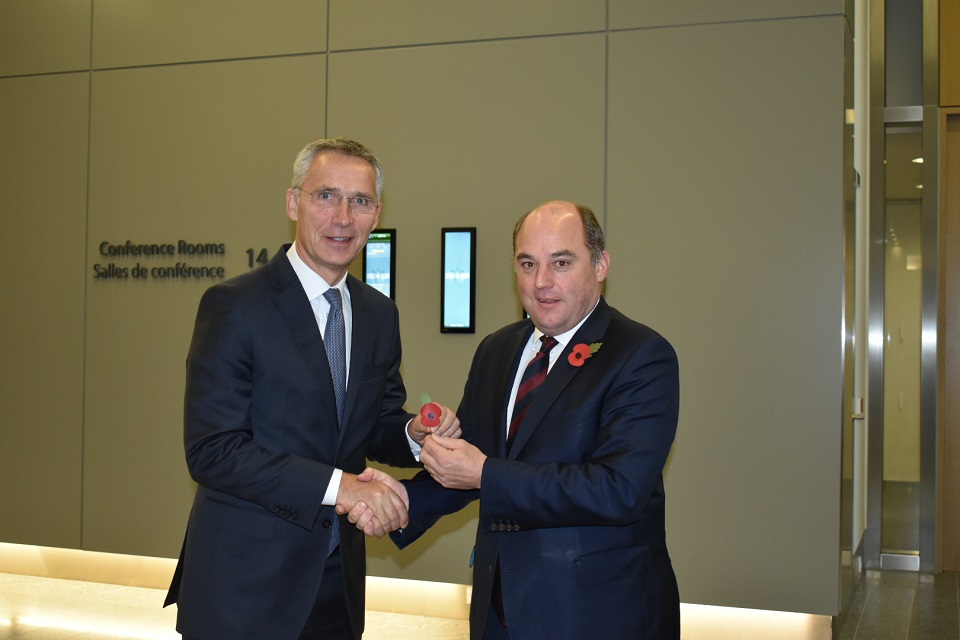 The UK continues to have the largest defence budget in Europe and the second largest in NATO. Thousands of our Armed Forces personnel work every day with NATO allies across the world.

The UK has nearly one thousand personnel in the alliance’s command structure and contributes across NATO’s operations, from Afghanistan and Iraq to the Enhanced Forward Presence in Estonia and Poland, and air policing in Iceland and the Baltics.

In December the NATO Leaders’ Meeting will be held in London, which will see the alliance come back to its first home in its 70th anniversary year.