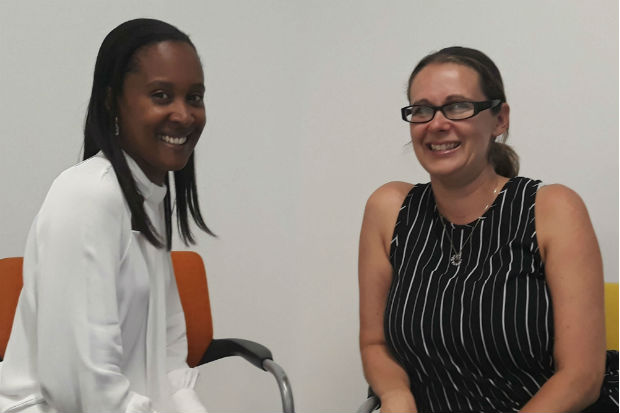 Welcome to the Race Champion Blog!

In this series of posts, I introduce inspirational people who are working hard to make a positive difference to our Civil Service. And this month's post really is about action – because when it comes to diversity, talking about it just isn't enough.

Vicky Elliott and Roxanne Ohene are the job-share deputy directors who lead the cross-Civil Service Ethnic Diversity Programme. Every department has (or should have) its own plans for improving representation and fairness. But Roxanne and Vicky work from within the Cabinet Office to identify cross-cutting themes, to find opportunities to share and scale-up good practice, and to support service-wide talent programmes.

It’s not always easy driving change from the centre, and we recognise we have a long way to go. But Roxanne and Vicky are brilliant, and I have found their support and industry invaluable.

When you read what they are trying to do, I hope you’ll be inspired to help them.

When the advert for the Ethnic Diversity Programme lead role came out, Roxanne and I were working in BEIS, and I was immediately drawn to it. Apart from my personal interest in diversity, I could see that Roxanne and I had different but complementary experiences (both personal and professional) that would make us strong joint candidates.

I appreciated the scale of the challenge. At the time of the ad, the stats showed that while the Civil Service was the most diverse it had ever been, less than 5% of the SCS were from an ethnic minority background – and I knew the programme would need to tackle that quickly.

I was also aware that people might be expecting someone from an ethnic minority to take on the role – I’m still sometimes asked why I’m motivated to work on ethnicity, given that I’m white.  I had a number of reasons, but I often think the most powerful answer is to flip the question: when we know that there are disparities between the experiences of white and ethnic minority civil servants, why wouldn’t you want to work directly to change that?

So I went for it.  And I am proud of what we have achieved so far.

I think the Civil Service wide targets we published to increase the flow of ethnic minority staff into the Senior Civil Service (SCS) were a big win for us, for example, as they really drive the whole programme. Departments are familiar with the targets, but sometimes I'm less sure if they’ve made it out into wider Civil Service conversations. So we are thinking about how we can communicate them more effectively. Essentially, by 2025, we are aiming for 13.2% of new recruits to the SCS to be from an ethnic minority background, which we think would double the representation rates to around10%. Urgently needed when representation only rose from 4.2% in 2010 to 4.7% in 2017 for the SCS (it’s 6% now).

We’ve also made some progress on process and system things that will help us achieve those targets. We rolled out diverse panels for SCS recruitment, and worked on some policy options in the background (such as the use of existing equalities legislation to drive change).

And we have started to put in place things that will help specific individuals from an ethnic minority, like the enhanced mentoring and sponsorship programme (Empower) we developed with staff networks, as well as SCS masterclasses to support ethnic minority career progression.

So there is progress. But there’s a lot still to do, and lots more I want to help our team drive forward in partnership with the people we have met who are passionate about ethnic diversity. Working with them is often the best bit of my job.

I have worked in the Civil Service for 17 years and it has been a continued frustration to me that my senior leaders do not represent the communities that we serve. While there has been a continued discussion about the importance of diversity across the Civil Service as a black woman I have not always felt that my experience and those of the diverse communities that we live are reflected in policy making.  As the mother of two young boys (and on behalf of Vicky’s two sons too) I wanted to make sure that when our children start their working lives, the Civil Service will feel representative to them – and that we won’t still be talking about the same ideas that we need to deliver to level the playing field.

I saw the opportunity to co-lead the Ethnic Diversity Programme. And I was really pleased to see from the start that there is a strong appetite and determination to improve ethnic diversity at all levels in the Civil Service, across networks and right up to our Permanent Secretaries.

But… I still think we have a lot to do. And I know from the time we spend with our employee networks (and with people who don’t choose to belong to those but still have important voices) that there’s a lot of frustration about the pace of change.  Sharing that frustration but having to objectively shape balanced policy in response is often the hardest part of our role, and is another reason why it’s great to have each other to consult and rely on.

I think there are signs of real progress though. Our central Accelerated Development schemes (for Grade 6/7s through to Directors) are now more ethnically diverse than the grades they serve, for example, and they have specific offers for ethnic minority civil servants through schemes like META.

Departmental race champion meetings are also now lively debates and more action focused.  We have started to link them into the new D&I Common Standards set out in Civil Service Diversity & Inclusion Champion Melanie Dawes’ recent  blog and I am confident we will see real differences in departments.

Our priority is to move to a place where we don’t just have pockets of good practice, but consistently good practice, when it comes to ethnic diversity. And although we are a formal programme, with a strong commitment to change, everyone can make a difference. That could be through mentoring or sponsoring, speaking up when meetings don’t include ethnic minority colleagues, or highlighting to others when teams seem to be recruiting in their own image.

Come to our speaker series to hear more – and read the Race Champion’s other blog posts for inspiration and pick a way in which you can make a difference!

Migraine Awareness Week – support and understanding in the Civil Service

How will you, how should I, how will we shape our future together?

Civil Service Live Online: What we learned from this year’s themes

Smarter working to a sustainable future

Staying connected and looking after your mental and physical health