Environmental Land Management (ELM) scheme tests and trials case study on a farmer-led group on the north-east coast of Britain.

To support the development of the Environmental Land Management (ELM) scheme, Defra is carrying out tests and trials with land users across England.

Defra interviewed Harry Baker Cresswell, one of the members of the 23 Burns Farmer Group, about his experience of the test and trials.

Harry farms a 242ha mixed farm on the Preston Mains farm in Northumberland. He became involved with ELM tests and trials in July 2018, after attending a Defra roadshow on the future of agriculture.

The 23 Burns Farmer Group looked at the development of land management plans (LMPs). The plans are one of 6 priorities for ELM tests and trials. An LMP is an assessment of assets, such as:

LMPs let farmers and land managers record the public goods they will provide under ELM in a way that suits them. An LMP plots the costs and benefits of a business’s land management activities, so the farmer or land manager can make informed business decisions about future activities. LMPs make it easier for a business to benchmark against peers and other economic sectors and regions so they can make improvements.

The ELM scheme will put farmers, foresters and other land managers more in control of how they use their assets to provide environmental public goods. Individual LMPs move us away from the prescriptive ‘one size fits all’ approaches taken by previous agri-environment schemes. 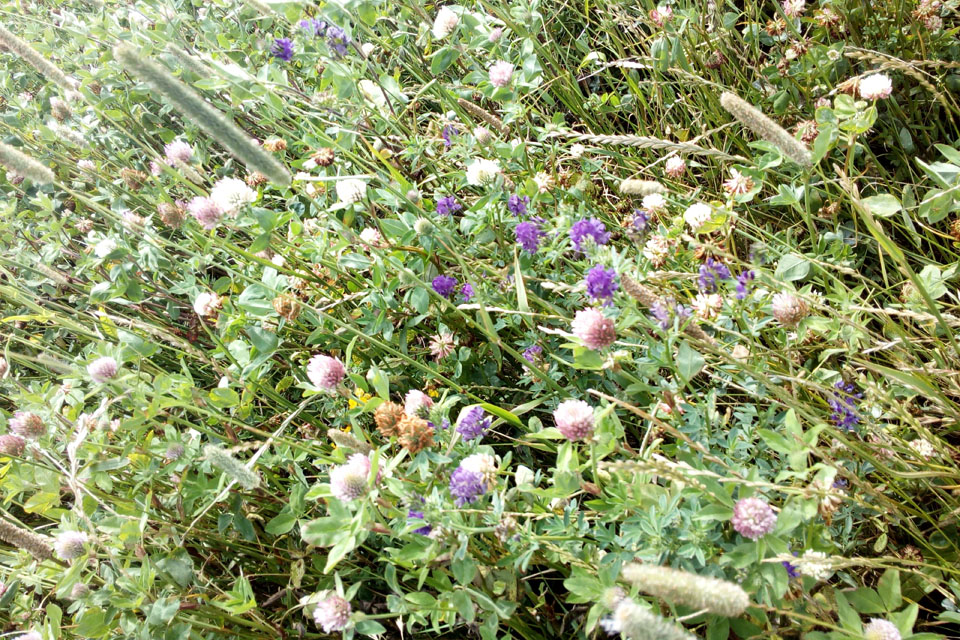 A pollen strip – a conservation measure – containing Timothy (a grass) plus red clover and sainfoin with birdsfoot trefoil, yarrow, knapweed, black medic and ribwort plantain at the base of the strip.

Harry is also an environmental farm adviser, supporting farmers and other land managers with their current agri-environment agreements. He helps them to make the most of their land and to benefit the environment.

Harry told Defra he is looking forward to the introduction of ELM, because he believes sustainable land use and farming are essential – it’s what he helps businesses to do every day. Harry said it was crucial that farmers and land managers play their part in achieving the objectives in the 25 Year Environment Plan.

The 23 Burns Farmer Group is on the north-east coast. It’s made up of 63 separate holdings, covering 13,672ha in total. This farmer-led group has worked collaboratively to develop an LMP for each business, so each farm can record the public goods they will provide under ELM.

The group formed because they wanted to be involved with shaping a new environment scheme. Harry believes that involvement in an environmental scheme can only be positive and that it’s important for farmers to try to influence the scheme design.

‘We learned to work together successfully’

During phase 1 of the trial, Harry worked with other farmers and land managers to produce LMPs detailing ideas, quantities and values to provide public goods in return for an ELM payment.

This trial demonstrates the ambition of land managers working together to provide landscape-scale benefits. Although working in this collaborative manner is nothing new for farmer groups - for example, when helping with local wildlife projects - joining forces to promote farmland conservation at this broader scale is something novel.

Reflecting on the trial, Harry said the greatest challenge was to work together at such a scale, but the land managers soon established processes to help make everything run smoothly. The success of the first phase has demonstrated that farmers with very different resources and needs can work together to provide what suits each particular farm. Each plan is tailored to the natural resources and assets each farm has.

Harry and the rest of the group hope the success of their work will inspire others. They yesterday said:

“In the coming months, members of the 23 Burns Farmer Group will be looking at land management options that will tie together local Natural Capital Assets and thus deliver much more value to the environment from stewardship. These will include better management of arable and pasture land for invertebrates and farmland birds, plus watercourse protection and the development of wider-than-standard wildlife corridors.”

Plans which will mean animal abusers could face up to five years in prison move a step closer.

Firms will need to take action ahead of the end of the transition period.

New rules and logos to protect British food and drink

Legislation laid in Parliament setting out new rules and logos to protect British food and drink.

Government to examine roll out of Remote Electronic Monitoring on fishing vessels.

Producers, suppliers, traders and end-users will need to take action to prepare for the end of the transition period.

Package of consultations launched seeking views on opportunities for the fishing industry.

Farmers invited to apply for grants to help improve their efficiency and benefit the environment.