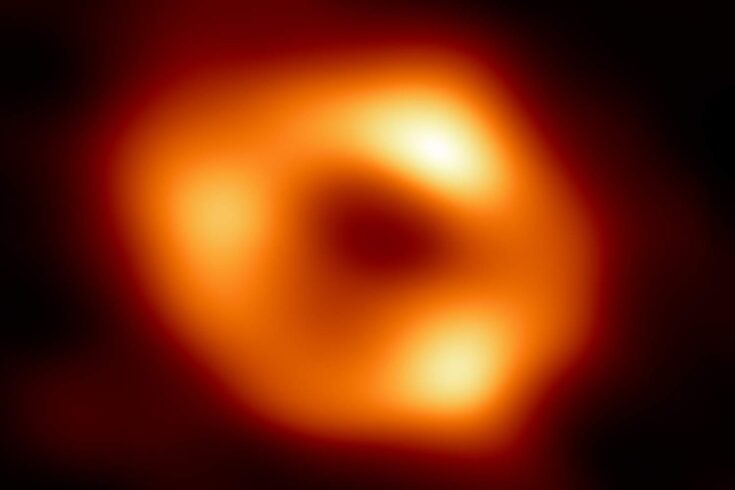 This is the first image of Sgr A*, the supermassive black hole at the centre of our galaxy. Credit: EHT collaboration

This result provides the first direct visual evidence that the object known as Sagittarius A* (Sgr A*) is indeed a black hole. It also yields valuable clues about the workings of such giants, which are thought to reside at the centre of most galaxies.

The image was produced by a global research team called the Event Horizon Telescope (EHT) collaboration, using observations from a worldwide network of radio telescopes.

The EHT achievement follows the collaboration’s 2019 release of the first image of a black hole.

The observation was made possible due to Science and Technology Facilities Council (STFC)’s contribution to essential instrumentation on the Atacama Large Millimeter or Submillimeter Array (ALMA). ALMA is one of the largest telescope arrays in the world.

The current image of Sgr A* is no exception.

Engineers and technicians from STFC have had a valuable role in supporting the infrastructure for some of the observatories making up the EHT collaboration, including:

The possibility of a supermassive black hole located at the centre of the Milky Way has long captured the imagination of a global community of astronomers. With this new image of Sgr A*, we are one step closer to unravelling the mystery around the very centre our own galaxy and its surroundings.

Over the past three decades, the UK has enabled ground-breaking astronomical observations. Our role in building or maintaining some of the largest radio observatories in the world, JCMT and ALMA, has laid the foundations for the pivotal work of the EHT Collaboration.

Coupled with STFC’s continued support of UK astronomers to utilise these world-class facilities, the UK remains a key player on the global astronomy scene.

Research and innovation in the UK

Two UK astronomers are part of the international team who have made the Sgr A* observation a success.

He is the author of one of only two codes used to generate an entire library of roughly 1.8 million simulated images used for comparison with Sgr A* observations. He has recently been appointed to the EHT Science Council.

Professor Derek Ward-Thompson from the University of Central Lancashire has been named as the chair of the EHT publication committee. He is the communicating author for the six research papers that are to be published as a result of the findings.

Our results are the strongest evidence to date that a black hole resides at the centre of our galaxy. This black hole is the glue that holds the galaxy together. It is key to our understanding of how the Milky Way formed and will evolve in the future.

Producing this image is the result of a monumental effort by hundreds of scientists over five years. It was especially challenging because of the haze of stars, dust, and gas in between Earth and the galactic centre, as well as the fact that the pattern of light from Sgr A* changes quickly, over the course of minutes.

But now we have comprehensive findings, and this work opens a new chapter in our understanding of black holes.

The publication of the EHT picture of the Sgr A* black hole is a tremendously exciting achievement by the collaboration.

The University of Central Lancashire has been associated with the JCMT in Hawaii for over 30 years, and the JCMT is a core part of the world-wide network of telescopes that has taken this picture.

STFC has contributed to the design and construction of several instruments on telescopes from the EHT array.

During the JCMT’s operation by STFC, with Canadian and Dutch partners, the UK Astronomy Technology Centre (UK ATC) in Edinburgh was involved in the construction of its key detection instrument, SCUBA2.

Currently, STFC is contributing to the operation of the JCMT via grants awarded to Cardiff University.

STFC has supported the development and exploitation of one of the largest telescope arrays in the world, ALMA, in several different ways.

Working with STFC’s Technology Department, RAL Space hosted one of three front-end integration centres. They assembled and tested many of the receiver systems and associated cryogenics that ALMA uses to detect signals from space.

STFC’s Technology Department also designed and provided the cryogenic systems that keep the ALMA telescope detectors at only four degrees above absolute zero to enable them to operate. Seventy cryostats, each weighing about half a ton, were delivered and are now embedded in the telescope dishes high in the Atacama Desert in Chile.

In addition, UK ATC delivered the software system used by astronomers as the main interface to correctly direct the massive observatory.

UK astronomers have access to ALMA through our national membership of the European Southern Observatory, one of its owners.

Learn more about the involvement of RAL Space with ALMA and JCMT.