Four awards in one week for Direct Rail Services

Direct Rail Services (DRS) scooped its 4th award of the week with its Class 88 locomotive named "Train of the Year – freight/ mixed traffic" at the prestigious National Rail Awards.

The Class 88 locomotive was described as a potential ‘game-changer’ in terms of electric freight train operation.

The Class 88, built by Stadler, is an electric locomotive that also boasts a powerful 750kW Caterpillar diesel engine which provides unrivalled flexibility allowing it to run on electrified and non-electrified parts of the rail network.

DRS, subsidiary of the Nuclear Decommissioning Authority, is using single Class 88 locomotives on its intermodal freight services which run daily between Daventry and Mossend.

The judges felt that the Class 88 has provided an excellent solution to efficient freight train operation into rail terminals. The ability to use metered electric power where available has also achieved considerable fuel cost savings. 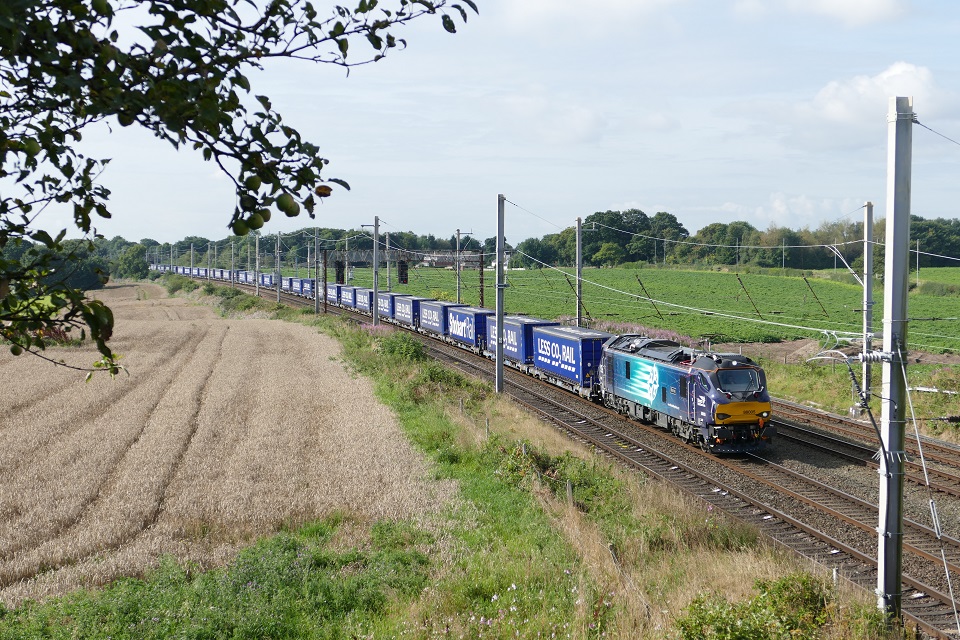 This latest success comes hot on the heels of the Rail Freight Group Awards on Tuesday, where DRS received the ‘Business of the Year’ award. This accolade is presented to the company that the judges consider to be the overall best performing business in the rail freight sector.

The DRS team is incredibly proud of the awards it has won over the past few days.

The recognition is testament to what can be achieved through effective teamwork together with huge support from our customers and suppliers. I would like to give my personal thanks to everyone involved as we look forward to many more exciting times ahead.

Judges said that DRS is a company that has shown excellence in several key areas this year and had “demonstrated a commitment to designing and implement exactly the right services for each customer, as well as introducing a very progressive staff development structure.” This had included giving office-based staff the chance to start a new career as train drivers.

Managing director, Debbie Francis, is at the forefront of championing the cause of rail freight in the wider business community and the role of women within the rail industry itself. The company shows an outstanding commitment to its customers, employees and the wider community.

This was not the only award on the night, DRS worked with Eddie Stobart Limited, to introduce a seasonal train in just two weeks in October 2017 to win the Customer Care Award.

DRS was also runner up in the ‘Community and Environmental Responsibility’ award for their efforts with the annual charity open day, sponsorship and donations fund and volunteer work in the community.

Five UK companies have progressed through to the next phase of a £5.5 million radioactive waste segregation competition.

The ‘Sort & Seg’ innovation competition, launched in July 2020, set the challenge of finding ways to sort and segregate mixed radioactive waste at some of the UK’s oldest nuclear sites.

A robot dog could soon be sniffing out hazards at Europe's most complex nuclear site.

A manifesto for Sellafield - what a difference a year makes

One of the most significant hazards at Dounreay has been removed, following 4 years of complex problem solving, in a 40 hour operation.

One of the nuclear site's biggest ever construction projects has taken a huge step forward – 2 months ahead of schedule.

Low Level Waste Repository becomes a subsidiary of the NDA

The shaft and silo project ‘advanced transition’ work is getting underway at Dounreay.

Our community's role is important, wherever a GDF is eventually located