Read techUK member Unboxed's first interview from the series, which tells the story of Rhian Lewis, developer and author. 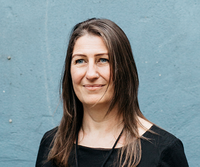 techUK member Unboxed is a dynamic digital agency that prizes diversity and celebrates individuality, made up of a group of developers, designers, thinkers and creatives. They recently launched a Women in Tech interview series which starts off telling the story of Rhian Lewis [pictured on the right], a developer at Unboxed and author of “The Cryptocurrency Revolution”, who describes her career trajectory as having begun as a writer who codes as a hobby to becoming a coder who writes as a hobby.

Read below part of Unboxed's interview and find out more about them here.

Q: Can you give our readers some background information on your role at Unboxed and what set you off on your current career path?

A: I'm a Ruby on Rails developer at Unboxed. I was originally a freelancer doing a mixture of writing code, blockchain consultancy work and writing, but I have decided to focus on improving my Ruby on Rails skillset, so I have four days a week at Unboxed. I really enjoy being able to solve problems by building things that make people's lives better, even if it’s just making systems more efficient in order to reduce frustration or providing technology that enables communities to function better. This is a powerful motivating force. But I also like the mental stimulation of writing code. To be honest, this is the least clock watchey career path that I've ever had. I find that it's like if you enjoy solving crossword puzzles and then somebody pays you to solve crosswords all day. The challenge of solving problems, working with colleagues, pair programming, even remotely, and learning to become a better technician, a better engineer. These are all things that fuel me with energy.

A: Days follow a typical pattern over a couple of weeks because we follow agile methodology which means that we work in sprints. A sprint is a package of work that takes, normally, two weeks. The start of a sprint involves a lot of teamwork where developers, designers, product managers and researchers come together to discuss how the product we’re going to build should work and what pieces of development to prioritise over the upcoming weeks. This is followed by a couple of weeks of intense coding where I could just be working on my own for the whole day. More likely, I might work on my project with two engineers who I get on really well with and who are really, really smart. We tend to be constantly talking to each other on Slack, answering questions, getting second opinions about things. Quite often, we'll jump on a conference call and screen share. Sometimes we can sit for hours, screen sharing, talking through a problem, coding through stuff together. That happens for a couple of weeks and then at the end of the sprint, we’ll get together again and have a demo session to show the client, who is still involved throughout, to show them an impression of what we've got. That same day, we’ll have another planning session and then the sprint starts all over again.

Q: What have been some of the most memorable projects that you’ve worked on?

A: At Unboxed, it’s been my most recent project. We have just finished the first phase of building some software that improves the housing planning process for local authorities (Southwark Council & Partners - BoPS - Back-office Planning System) This has been super interesting because I’ve sat in on a lot of the user research sessions and heard first-hand about the issues that planning officers have working with really old fashioned systems and then watched them interact with the software that we’ve built. This has been really inspiring! Of all tech projects that I've been involved in, one of my favourites was a car hardware project that I did for Audi in Berlin. It was great! We actually had a real car to work with. That was cool because we were designing what was at the time the first keyless car rental system and an IoS app that would allow you to open and close the car and pick your choice of rental car. The app would allow you to walk to the car, open it up and drive it off. It's fairly common technology these days, but back in 2014, it was really cutting edge, which made it a lot of fun to be involved in, and of course, having a car to play with made it even more fun.

Q: Bearing all of your experience in mind up until this point, what would be the next big technological or social innovation that you would like to see achieved?

A: I really believe in the arc towards a decentralised future: technology that enables people to make money, prove their identity and cooperate and share information in a decentralised way which removes control from many of the centralised imposters hoarding control at the moment and using it to their own advantage. This would be a really good thing.

Q: One final question: if you could go back in time and give yourself advice while you were making that career change and entering into a new industry and new space, what would it be?

A: Just to be more fearless. You've got this one life to enjoy and if it's something that you enjoy, you've just got to give it a go and hope that it works out because life's too short not to, at least, have tried. Also, not to care what people think of you. I mean, that's not quite right. I wouldn't want people to think that I'm a bad or horrible person but to not care if people think that you're stupid or eccentric or a bit strange or whatever. Not caring about that. I think that's really important.

Let’s use our heads to solve digital exclusion

On 20 April, techUK will host its Open Finance and Inclusion Summit. During the conference's final panel, sponsored by LexisNexis Risk Solutions, speakers will explore how to unlock digital finance for all.

Few countries have taken to digital payments as enthusiastically as the UK. With Covid-19 accelerating pre-existing trends in consumer behaviour, digital payments have overtaken cash as the most popular means of paying for goods and services.

The changes that banking is set to undergo over the next decade will be both radical and fundamental. CDOs should use this opportunity to drive greater organisational agility through agile approaches to enterprise data architecture.

Banks, once so serene, now find themselves in a sea of change that demands a new type of agility.

Open Finance: why it is so important particularly in relation to geospatial and urban planning data

It has been said many times that data is the oil of the digital age, but this metaphor is frequently misunderstood.

Who owns your bank data?

For years, the answer to this question was straightforward: your bank. But then digitisation happened, and with it came many new services: Spotify suggested music you might like, Uber plotted your best route home. Slowly, people started to see the power of data to deliver more convenient and personal services.

Digital Markets Unit set up in Competition and Markets Authority

A DCMS press release has confirmed the ‘shadow’ launch of the Digital Markets Unit based in the Competition and Markets Authority to start looking at how codes of conduct would work in practice to promote competition in digital markets.

Data is a simultaneously the most exploited and the most under-used commodity of the digital age.

This week techUK will focus on key topics for the financial services and technology industries which are critical to the UK wider economy as we embark on the economic recovery.