HMS Pembroke back in action after Fife refit

HMS Pembroke is back with the Royal Navy ahead of schedule and ready for ac-tion after a successful 42-week, £8 million refit at Babcock’s Rosyth dockyard in Fife.

The work was carried out on the Sandown-class mine countermeasures vessel (MCMV) by about 50 Babcock International employees plus specialist sub-contractors.

The Rosyth team upgraded the ship’s sonar and communications systems, overhauled her propulsion systems and generators, and improved her fresh water tanks.

The HMS Pembroke refit is another example of the impressive engineering skills of our Scottish dockyards.

The upgraded vessel will return to carrying out the vital work of finding and destroying underwater threats and keeping shipping lanes safe. I wish HMS Pembroke and her crew well on their next tasking.

She can operate in deep and exposed waters, using clearance divers or a SeaFox remote-controlled underwater vehicle to deal with hazards at depths of up to 200 metres.

After a refit that was on time and within budget, HMS Pembroke completed sea acceptance trials off the Scottish and Norwegian coasts a day ahead of schedule.

She will now re-join her six sister ships as part of the Faslane Flotilla at Scotland’s largest military establishment, HM Naval Base Clyde.

Two of the Faslane ships are permanently based in the Gulf and Indian Ocean, where they work with local militaries to promote peace and stability in the region and support the international effort to ensure the safe transit of oil and other goods. 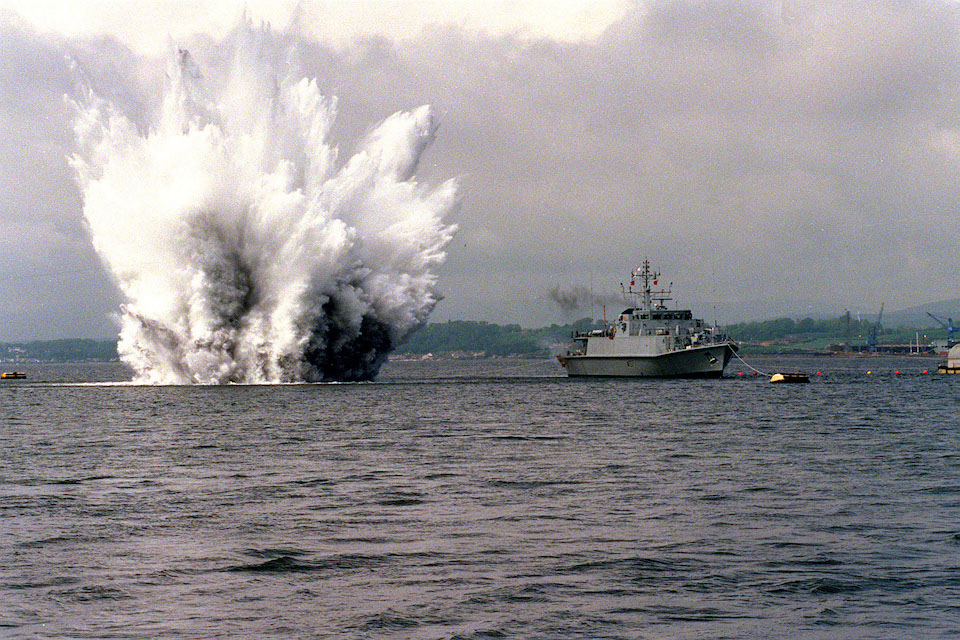 HMS Pembroke destroying a mine.

This is a great achievement for Defence Equipment & Support, Babcock and HMS Pembroke’s own crew, whose project management skills and collaborative working demonstrates once again or commitment to continuous improvement.

It’s been a real team effort from Babcock, the sub-contractors, DE&S and my own ship’s company to get Pembroke out in such great shape.

That we have managed to sail through all of our trials in such a short time and pass them all with flying colours really goes to show what great work has gone on over the past nine months. We’re now ready to start delivering on operations wherever we are needed.

Rosyth dockyard has developed a specialism in refitting Royal Navy MCMVs and patrol vessels. Prior to the work on HMS Pembroke, HMS Penzance underwent a successful 10-month refit.

Of all the £1.69 billion that Defence procurement spends with Scottish businesses each year, approximately one billion is invested in ship building and maintenance, including submarines, supporting 5,500 jobs in the Scottish private sector.

In September 2019, the Ministry of Defence announced that Babcock is its preferred bidder to build five T31 frigates at an average production cost of £250 million per ship.

Babcock expects the Type 31 programme to sustain about 1,250 highly-skilled roles in multiple locations across the UK including Rosyth, the central build and integration site. All five vessels will be delivered by the end of 2028.

We were delighted to complete the refit of HMS Pembroke on time and look forward to carrying out similar packages of work on the other minehunter vessels.

Due to COVID-19 precautions, all Veterans UK services are operating via remote working and this has meant we have had to change several of our services.