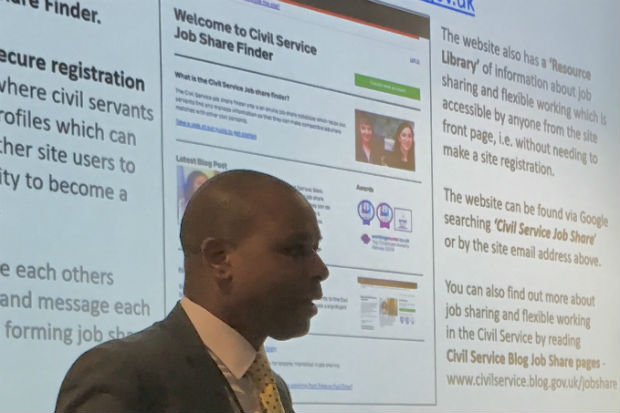 Civil Service Job Share Finder was originally designed to support maternity leave returners to the Civil Service who were looking for a better work-life balance.

However, as Product Manager of Job Share Finder, I have seen more and more men choosing to become job sharers to enjoy the benefits of a better balance between work and home commitments.

Of the 2,731 colleagues who have registered on the site, 20% are men – double the proportion when the site launched in 2015.

The introduction of Shared Parental Leave coincided with (and may have influenced) an increase in men looking for Job Share partners. A particular motivation for some is having more time to enjoy the rewards of fatherhood.

There has also been an increase in both male and female colleagues looking to job share so as to allow time to care for older relatives, or loved ones with a health condition.

The Civil Service Carers' Charter, published in 2018, raised awareness of the commitment to help colleagues who are carers. Meanwhile, the Carer's Passport helps carers and their line managers to clarify and agree actions and processes (which may include Job Sharing) that help those colleagues to manage their work effectively while fulfilling their caring activities.

In the run-up to Father’s Day this post is a celebration of two male civil servants. One, Edward Barker,  is a job sharer, the other, Brian Day, a carer. What they both have in common is that they are supportive and caring fathers. 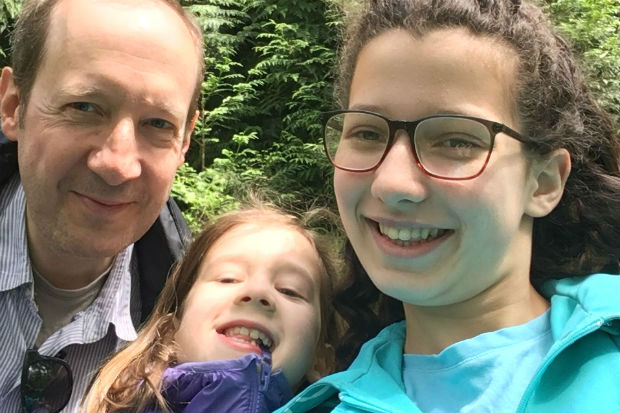 Edward Barker with his daughters

I had thought about working part-time, while my daughters are still young enough to want to spend time with me, but I hadn’t specifically sought a job share.

Late last year I was looking for a move, and this opportunity arose, following the rapid growth of DEFRA’s work on the environment. The breadth, challenge and meaningfulness of the role were very attractive – and I knew and respected the prospective job sharer (Andrea Ledward), having been on a development programme with her a few years ago. I have to admit there was an element of luck!

I’ve come to realise that ours is a slightly unusual job share, as we each work four days a week (Andrea’s doesn’t work on Fridays and I generally don’t work on Wednesdays). This means that in a typical week we are more often in the office together than not. So it’s less about one person covering everything, then handing it all over to the other. We are both closely involved with our two major cross-cutting areas of work – the Environment Bill and 25 Year Environment Plan – and we alternate team leadership work. We have shared out line management responsibilities and other top priorities (for example, I lead on establishing a new environmental watchdog). Finally, we cover for each other, as and when needed.

A major benefit is that I’ve got back some time I can spend with my family and on activities outside work (I’m trustee of a number of charities and a governor of my daughter’s school).

Because there is someone doing the job when I’m out, there isn’t the same pressure to work full-time for part-time pay. But it’s also a different way of working. We bring different, but hopefully complementary, styles, experiences and skills, and there’s real potential to bring more to the team than simply the sum of our individual contributions.

For someone who is used to ‘owning’ a patch, it takes a little adjustment to think in terms of genuinely sharing responsibility. And it takes effort, patience and organisation to realise the benefits of pooling what we each bring to the job share. Some people can be a little perplexed by the arrangement, but generally, once I’ve explained it, they can see the benefits.

What are the practical things that make it work?: 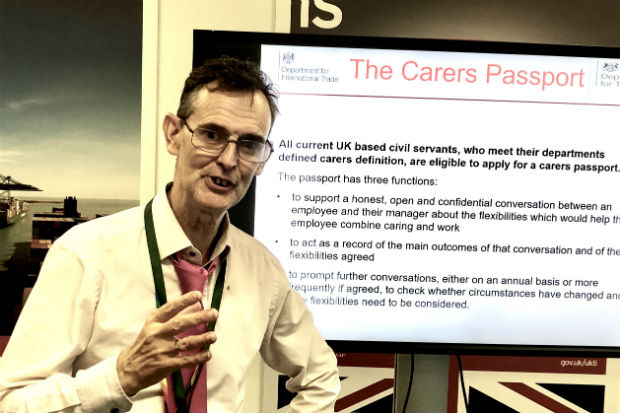 As part of the HMRC Carers Network we were highly commended in the Network Excellence Award Category of the Civil Service Diversity & Inclusion Awards. My contribution was being an advocate for the Carer's Passport. I set up the Coventry Cares HMRC Carers Network, and helped set up other office networks throughout HMRC.

I am a vocal advocate for The Charity For Civil Servants. I was one of the first people to receive a carers statement from the charity.

In October 2018 I was asked to be a judge for the Charities Community Awards and was then approached to give the final speech at their awards evening. I was also honoured by having the Network Award named after me. Last year, they asked me to tell my story as a carer, and a video was used to launch their digital online resource.

I am a big supporter of flexible working for carers, which allows them to combine their caring responsibilities with their work. Flexible working can be anything from job sharing to compressed hours, with lots of variations in between.

Let me give you an example. For the last nine months I have been on secondment to the Department for International Trade. DIT actively encourages flexible working, and lets me work from home twice a week. This gives me more time with my wife, while continuing to be a productive member of staff.

The biggest role I have, is father to my two amazing daughters, Bekka and Sophie. They, too, have grown up caring for their mother. I am immensely proud of them. My eldest daughter is a qualified childcare practitioner and my youngest is studying performing arts at college. They have grown into fine young ladies.

A strategic approach to government innovation

My week volunteering on the healthcare frontline

The Cabinet Office will host an international conference on fighting fraud in digital economies.

Civil Service Year of Inclusion – What inclusion means to me... Mark

A look back at 2019 – Civil Service Race Champion Richard Heaton