A community group in Hertfordshire has received £10,000 of National Lottery funding to deliver cancer exercise rehabilitation and support group sessions for people living with – and recovering from – cancer.

Herts Coaching Association will use funding from The National Lottery Community Fund, the largest funder of community activity in the UK, to run three weekly physical activity sessions, followed by support groups, across Hertfordshire. The sessions are conducted by Level 4 Cancer Rehabilitation Specialists and will help people with mobility, strength and stamina as well as improving confidence and mental well-being. 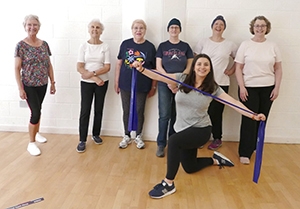 In April 2021, Amanda Trubus was diagnosed with an advanced and aggressive form of Non-Hodgkin’s Lymphoma. Retiring after 40 years as a primary care GP at the end of 2019, it wasn’t ‘quite the retirement she was expecting’.

“At the beginning of October, I had completed six rounds of chemo with good support from my chemo nurse and consultant. It was a brutal experience, but the good news was, the chemo had done a good job. There was still some residual cancer, so I had a three-week course of radiotherapy over the Christmas and New Year period at the Mount Vernon Cancer Centre,” explained Amanda.

Following a further scan in April, Amanda was given the good news that she was in remission, but the intense few months had taken its toll.

“Not only was I feeling weak physically having lost a lot of muscle, but I was feeling weak emotionally and mentally too. I had lost confidence and become quite anxious.”

Amanda joined the Cancer Rehabilitation classes in February and has felt the benefits of the weekly classes both physically and mentally.

“It was such a positive experience and I look forward every Tuesday to meeting up, doing the helpful rehab exercises and then the best bit – tea or coffee afterwards where we can confidentially share our cancer journeys, worries, concerns, joys and good things too.”

“At the beginning of the 12-week sessions I completed a questionnaire about where I was on a well-being scale. As I am nearing the end of the course, I can honestly say I have progressed really well. It has been a great to welcome other cancer patients to the class and see them improve too.”

Herts Coaching Association is one of over 270 charities and community groups across the East of England to have been awarded almost £6 million of National Lottery funding over the last three months*.

“Since the pandemic, a lot of the social aspect have gone from groups and speaking with clients this is something that was missed. Our project allows participants to meet other people in a similar situation, to be open and share how they’re feeling.

“Thank you to National Lottery players for supporting our project. Without this funding we wouldn’t be able to exist and provide this vital support to people in Hertfordshire to build back their confidence with exercising.”

Over the last three years, funding from The National Lottery Community Fund has reached every constituency and every local authority in the UK.

“Thanks to National Lottery players, this vital funding will have a huge impact on people’s lives across Hertfordshire. Our funding plays a big role in helping communities to unleash their potential and it is great to see groups like Herts Coaching Association making a positive difference and continuing to support people in their communities.”

National Lottery players raise over £30 million each week for good causes across the UK. In the last 12 months we have given out nearly £600 million to 12,500 organisations reaching every local authority and constituency in the UK.

To find out more visit www.TNLCommunityFund.org.uk

About The National Lottery Community Fund

We are the largest funder of community activity in the UK – we support people and communities to prosper and thrive.

We’re proud to award money raised by National Lottery players to communities across England, Scotland, Wales and Northern Ireland, and to work closely with Government to distribute vital grants and funding from key Government programmes and initiatives.

Our funding has a positive impact and makes a difference to people’s lives. We support projects focused on things that matter, including economic prosperity, employment, young people, mental health, loneliness and helping the UK reach net zero by 2050.

Thanks to the support of National Lottery players, our funding is open to everyone. We’re privileged to be able to work with the smallest of local groups right up to UK-wide charities, enabling people and communities to bring their ambitions to life.

Twelve projects, run for and by young people, are celebrating after sharing in more than £930k from The National Lottery Community Fund’s Young Start fund today (FRIDAY 12 AUGUST).

The National Lottery Community Fund in Wales has announced over £1.8m in grants to 56 groups across Wales

The National Lottery Community Fund in Wales is announcing over £1.8m in grants to 56 groups across Wales, including helping babies and toddlers in Blaenau Gwent and improving wellbeing by learning traditional crafts in Carmarthenshire.

The National Lottery Community Fund yesterday announced major funding of £1,697,257 to bring communities together to tackle food sustainability in Derry/Londonderry.

The National Lottery Community Fund in Wales is announcing over £1.8m in grants to 56 groups across Wales

Climate Action Fund opens for applications, with up to £8 million in National Lottery funding for communities focusing on nature and climate change

The National Lottery Community Fund’s Climate Action Fund is today making up to £8 million available to community projects across the UK that are focusing on the link between nature and climate.

The National Lottery Community Fund and the Department for Digital, Culture, Media and Sport (DCMS) yesterday announced an additional £12 million funding to the #iwill Fund, helping to support young people from all backgrounds and areas to access high quality social action opportunities.

£1.3m from dormant bank accounts is helping the VCSE sector in NI to become more sustainable

Organisations from the voluntary, community and social enterprise (VCSE) sector in Northern Ireland are benefitting from over £1.3 million from the Dormant Accounts Fund NI. Delivered by The National Lottery Community Fund in conjunction with the Department of Finance, the programme is supporting the sector to be more resilient and prepared for the long-term future.

Hope Church Merthyr Tydfil, a food poverty charity are celebrating £78,000 for their ‘Help@Hope – Hope Pantry’ project to develop their community pantry and offer a one-to-one befriending service. The charity is just one of 76 community groups across Wales celebrating a share of over £4.6 million from The National Lottery Community Fund, the largest funder of community activity in the UK.