On a visit to East Croydon Station, recently accredited as a secure station by the British Transport Police (BTP), the Rail Minister met with Southern station staff who are helping to make every passenger’s journey safer.

More than 673 stations across Britain are now accredited by the BTP, with 172 stations either newly-accredited or re-accredited since the launch of the refreshed Secure Stations Scheme in 2017.

Apply for the Secure Stations Scheme

The minister also met with BTP officers and charities including Samaritans and the Railway Children, who all engage with passengers to ensure they feel supported and safe on Britain’s railways.

The Secure Stations Scheme forms part of the exceptional work British Transport Police, station staff and charities do every single day to give passengers the safe journeys they deserve.

More than 170 stations are now newly or re-accredited under the refreshed scheme, demonstrating an outstanding commitment to tackling crime and safeguarding passengers.

It is particularly poignant and important today to commend the incredible work being done on suicide prevention, ensuring we protect vulnerable people on our railways. 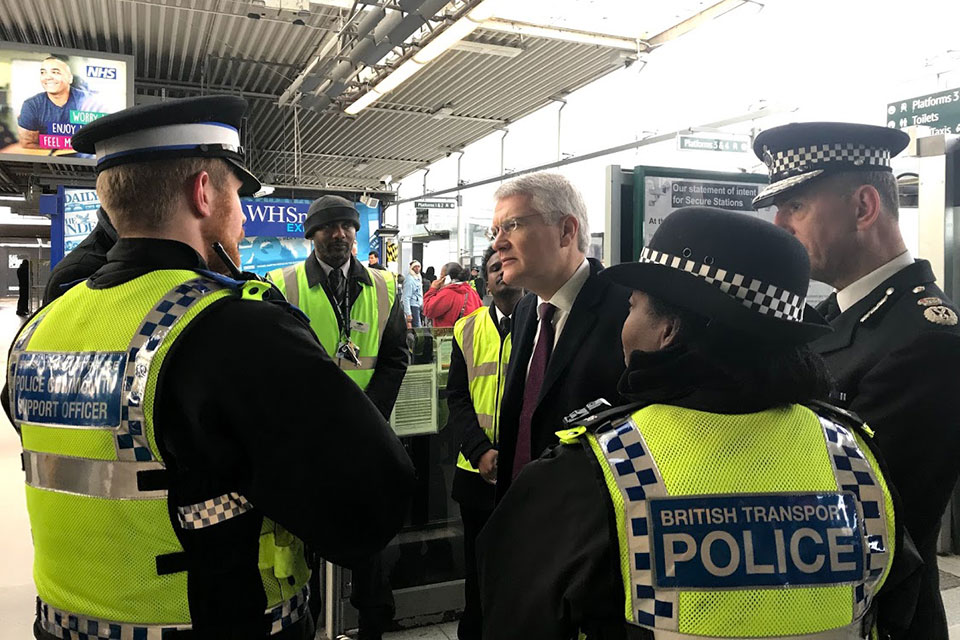 Tackling crime and safeguarding the most vulnerable on the railway is one of our key priorities and we’re pleased to see that more than 170 stations have now been accredited under the refreshed Secure Stations Scheme – helping passengers and staff feel safer across the rail the rail network.

The chance of becoming a victim of crime whilst travelling or working on the network remains comparatively low – on average there are only 19 recorded crimes for every million passenger journeys. Secure stations is an important initiative, acting as a national benchmark that police, rail industry and government can work towards making stations an even safer and low crime environment.

Achieving this accolade here at East Croydon once again is an important achievement. The scheme forms an important part of the excellent work our staff deliver with our industry partners to keep passengers safe and secure.

Samaritans has been working with the railway industry since 2010 to prevent suicide and provide advice, training and access to our service. Samaritans has now trained more than 17,000 railway staff to spot vulnerable people on the network and intervene to help them.

We see partnerships as playing a vital part in achieving our vision of reducing suicide. They allow us to reach vulnerable groups that may not otherwise contact Samaritans.

We join up with organisations from a variety of sectors, including health, education/young people, transport, construction and the services. We look forward to continuing to do this and save more lives in the future.

Railway Children is committed to supporting vulnerable children across the country who are using the rail network to run from violence, abuse and neglect.

Last year, BTP generated more than 8,000 referral reports in connection with vulnerable children they encountered at railway stations. Our partnership with them has enabled us to offer follow-up support to 350 of these children as well as intensive work with 40 of the most vulnerable ones. With ongoing support from the rail industry we will make stations safer places for many more children.

We are delighted that the Secure Stations Scheme includes safeguarding as a key indicator and we congratulate East Croydon on their achievement in being given this award, and in making their contribution to ensure all children are safe on our railway.

Originally launched in 1998, the Secure Stations Scheme provides station operators with the chance to demonstrate how they are working with partners to make journeys as safe as possible.

The national scheme covers all rail networks which are policed by the British Transport Police. A range of factors are assessed before a station can be granted accreditation, including visibility, lighting, CCTV, safeguarding of vulnerable people and crime data at the station in question.