Robots at the bedside and “care-bots” in the home will transform the delivery of health and social care, report finds

The NHS could free up frontline time worth up to £12.5 billion a year, almost 10 per cent of its annual running cost, by investing in a far-reaching programme of automation, a report to be published later this month will say.

A further £6 billion productivity gain could be realised by automation within social care, where 30 per cent of current tasks could be carried out by adopting new technology, according to the report.

The findings, released yesterday by the IPPR progressive policy think tank, will form part of a landmark report into the future of the NHS, led by eminent surgeon and former health minister Lord Darzi.

Unlike in some industries, where there are fears that automation will lead to job losses, in health and social care it will complement human skills and talents, by reducing the burden of repetitive and administrative tasks and freeing up of staff to spend more time on direct clinical care with patients.

The report identifies communicating medical notes, booking appointments and processing prescriptions among the many activities that should be carried out through digital technology. Researchers have calculated the value of the time that may be released through automation of the current tasks in different roles, freeing up professionals to focus on caring.

The report envisages a possible future in which robots and artificial-intelligence based systems play a key role in assessing, treating and supporting clinical practice to offer clinicians more time to focus on direct patient care. Someone arriving at hospital may begin by undergoing digital triage in an automated assessment suite. Artificial intelligence-based systems, including machine-learning algorithms, would be used to make more accurate diagnoses of diseases such as pneumonia, breast and skin cancers, eye diseases and heart conditions.

Lord Darzi, himself a pioneer in robotics-assisted minimally invasive surgery, also points out that these systems are already able to undertake some surgical tasks such as tying knots and making stitches with greater accuracy and dexterity than humans—and that these developments are set to expand in the decade ahead.

Outside the operating theatre, ‘Bedside robots’ may become a reality, assisting patients with meals, transportation and portering, and rehabilitation. Digital systems will enhance communication with friends and family, and biosensors will allow the remote monitoring and alerting responses to clinical observations, such as potentially life-threatening sepsis.

Beyond the NHS, so-called “care-bots” will empower people in old age, enabling better, longer, and more fulfilling lives, and improve social care. Digital systems and “care-bots” will enable people to remain more socially connected to friends and family. Trials are already under way of robotic pets, which can provide some of the comfort of companion animals without the need to be cared for in return.

Echoing a remark by Aneurin Bevan, health minister when the NHS was launched in 1948, Lord Darzi’s report says: “In the 21st century NHS, it might not be the sound of a bedpan dropping that is heard in Whitehall, but that of a robot picking it up. The NHS turns 70 this year but we must turn our sights to the future. We should not accept an analogue NHS in a digital decade.”

To unlock this potential, Lord Darzi calls for the Government to embrace a strategy aimed at delivering “full automation” for repetitive and administrative tasks in health and care. He proposes creating an automation fund to invest in the digital infrastructure needed, and to offer all staff impacted by automation "the right to retrain", with a focus on filling gaps caused by staffing organisations within the service.

The full report will be published as the Government faces demands to declare a long-term spending plan to guarantee necessary and stable funding for the NHS before its 70th birthday celebrations later this summer. Lord Darzi and his colleague, Lord Prior, a former Conservative health minister, have argued for an injection of cash rising to more than £50 billion a year for the NHS by 2030, and £10 billion a year for social care.

Last month they proposed raising National Insurance contributions by a penny in the pound to fund the necessary increases for the next four years.

For further details, and to request a section of the forthcoming Darzi report, contact Florri Burton on f.burton@ippr.org / 07867 388895

Tom Kibasi, Director of IPPR, and Harry Quilter-Pinner, IPPR Research Fellow and a co-author of the report, are available for interview. 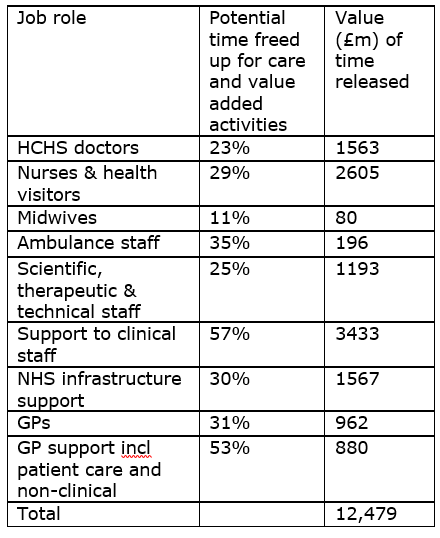 He was knighted for his services in medicine and surgery in 2002. In 2007, he was introduced to the United Kingdom’s House of Lords as Professor the Lord Darzi of Denham and appointed Parliamentary Under-Secretary of State at the Department of Health. Upon relinquishing this role within central government in 2009, Professor Darzi sat as the United Kingdom’s Global Ambassador for Health and Life Sciences until March 2013.

Lord Prior was Parliamentary Under Secretary of State at the Department for Business, Energy and Industrial Strategy from 21 December 2016 to 27 October 2017. David previously served at the Department of Health as Minister for NHS Productivity from May 2015 until December 2016. He is a Conservative member of the House of Lords.

Their report on the reform and future of the NHS will be published later this month.

IPPR is the UK’s pre-eminent progressive think tank. Our mission is to open up opportunity, power and prosperity to everyone through conducting rigorous research and generating big ideas. With more than 40 staff in offices in London, Manchester, Newcastle and Edinburgh, IPPR is Britain’s only national think tank with a truly national presence.

Work Foundation - Unemployment at record low, but real wages fall 2.8% on the year

Ben Harrison, Director of the Work Foundation responds to the Labour market overview September 2022 released by the Office for National Statistics