IPPR - Revealed: the health inequalities holding back growth in key areas of the UK

Regional inequality is being exacerbated by high levels of illness - reducing levels of productivity and the number of people available for work - according to a new report by IPPR.

The government's levelling up agenda is being critically undermined as new data shows sickness is twice as likely to force people out of work in the north east of England, Wales and Northern Ireland as in London and the South East.

There are now 2.5 million working-age people economically inactive because of their health – the highest level since records began.

Across the UK, on average, 6.1 per cent of the working age population are economically inactive because of poor health. However, in the North East, North West, Yorkshire, East Midlands, Wales, Scotland and Northern Ireland that figure is significantly higher. All these areas also have lower than average life expectancy and lower than average productivity per person. 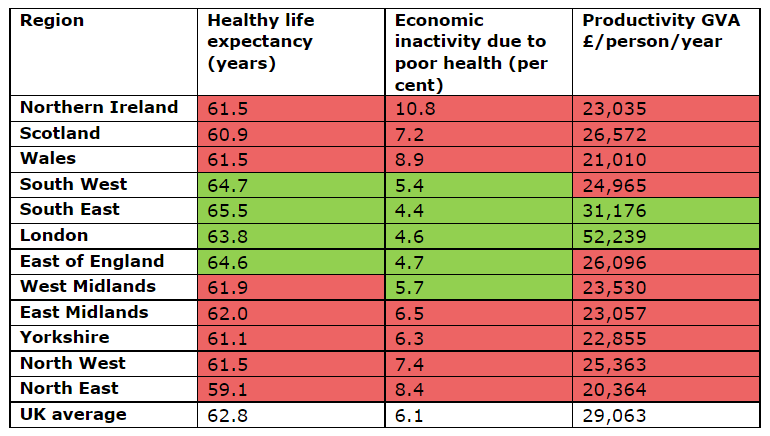 The report also finds that Covid-19 has made this regional inequality worse, as Wales, Scotland and every region in the north of England and the Midlands have higher long-Covid incidences than the UK average.

The findings form part of an IPPR commission on health and prosperity report, coming out later this week.

Chris Thomas, head of the Commission on Health and Prosperity at IPPR, said:

“If the government truly wants to level up the country, it needs to do far more to make better health a keystone of the UK’s economic recovery. Better health is the best and clearest route to better lives, fairer economics, and greater prosperity for us all.”

Jordan Cummins, health director at the CBI, and a member of IPPR’s Commission on Health and Prosperity said:

“Businesses across the country care deeply about the health and resilience of the workforce and need this to be a priority for government. The consequence of millions being lost from the labour market has a real human cost, but also presents a drag on economic growth.

"Government intervention, in partnership with industry, will be crucial. Policymakers need to prioritise prevention, reducing harm once people are sick, investing in innovative treatments, and partnering with businesses to accelerate progress and create healthier workplaces more inclusive employment opportunities."

Clare Bambra, professor of public health at Newcastle University and also a member of the IPPR commission said:

Chris Thomas, the report’s author, is available for interview

Over three quarters of the public (78 per cent) do not think they could live on the Apprenticeship Minimum Wage, according to new polling by Opinium for the London Progression Collaboration ahead of National Apprenticeship Week.

How should pensions be taxed? We propose income tax and National Insurance reforms that would more evenly support pension saving.

After health, funding for Scottish councils is the second largest item in the Scottish Government’s Budget.

Dr Andrew Lilico, Chairman of the Shadow Monetary Policy Committee and Fellow at the Institute of Economic Affairs Commented on the Bank of England’s decision to increase interest rates to 4 per cent

The UK’s leading progressive thinktank, IPPR, has responded to the announcement that the Bank of England has raised UK interest rates to their highest level for 14 years as it has just lifted them for the tenth time in a row, increasing them by half a percentage point to 4 per cent.

The UK’s leading progressive thinktank, IPPR, has responded to the announcement that Shell has made £7.9 billion ($9.8bn) in profits in the last quarter (Oct-Dec 2022), taking their total profits in 2022 to £32.2 billion ($39.9bn), and yesterday announced a new round of share buybacks transferring a further £3.2 billion ($4bn) to shareholders.

Peter Matejic, Chief Analyst at the Joseph Rowntree Foundation responded to the latest report from the Monetary Policy Committee of the Bank of England

Professor Len Shackleton, IEA Editorial and Research Fellow, and author of the report Red Card, commented on the revival of plans to set up a new independent football regulator

A new Institute for Government report calls on the UK government to put England’s mayors at the heart of its net zero strategy and give England’s locally-elected leaders the powers and funding to become trailblazers in transitioning to a green economy.