The UK needs an economic boost about four times as great as that currently planned by the government in order to restart the economy most effectively, says a new IPPR briefing paper.

Researchers calculate that £190 billion is needed to get the UK economy back on track - four times as much as the chancellor has committed so far, and a figure which broadly matches the ambition of US President Joe Biden’s new administration.

This UK stimulus should be devoted to supporting businesses, workers and households hardest hit by the pandemic, restoring public services and helping the growth of sustainable, "future-proof" industries and jobs, the think tank says.

Failure to deliver such a boost risks condemning the UK to a “stagnation trap” with about half the rate of economic recovery. It would mean lower business investment and leave unemployment at more than 10 per cent in spring next year - much higher than under the proposed IPPR stimulus.

What’s more, IPPR calculates that the widely-watched “debt to GDP” ratio – the total amount owed by the government, compared to the overall size of the economy – would be lower than under current spending plans. That’s because a faster recovery would mean the amount borrowed is ‘offset’ by relatively quicker economic growth, and would also generate higher tax revenues and so lower borrowing in future years.

The IPPR paper finds that:

“The chancellor should use the budget to provide bold support for the economy and introduce measures that match the scale of the economic peril the UK faces.

“The Biden administration’s plan shows what is possible. And it highlights the scale of support needed to bring economies back to pre-crisis levels of activity, or else risk falling into a ‘stagnation trap’ – a situation of a sluggish recovery and permanently diminished growth. All in all, the risk of doing too little far outweighs the risk of doing too much. Joe Biden has understood this. Rishi Sunak should follow his lead.

“Many agree with the need for a significant boost, but worry that we cannot afford it. That profoundly misunderstands the financial situation we’re in. Eminent institutions including the International Monetary Fund (IMF) and the OECD now advocate a sizeable stimulus for economies like ours, financed by borrowing, as interest rates are so low and the scope to generate rapid growth is so large."

“The UK and the US face the same question; will the economy return to growth without intervention or does it need a stimulus? President Joe Biden has proposed a $1.9 trillion stimulus package aimed at revitalising the US economy. He is right to extend economic rescue measures which will help it recover after the pandemic and support struggling families.

“We estimate that an ambition similar to that of the US would be needed to get our own economy back on track. Otherwise we will face years of unnecessary economic pain, with fewer jobs, less investment and a slower recovery for everyone. It’s time for the UK to boost it like Biden.”

Per cent of GDP 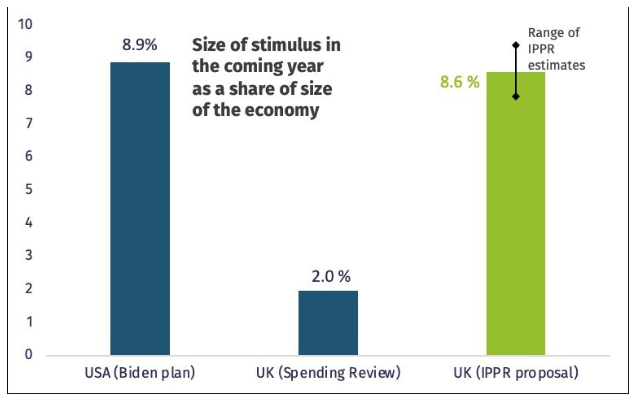 Note: For ease of comparison, GDP denominator chosen is 2019. The timeframe over which the stimulus is expected to apply is the fiscal year 2021/22. UK stimulus is calculated as additional spending above the March 2020 OBR forecast. US stimulus is taken as the size of the Biden proposal with the assumption (based on White House announcements) that it will be spent over the same time period as in the UK. Most of the Trump stimulus will expire by Q2 2021 which is why we did not add it to the Biden stimulus.

Pay is important, but it is not the only factor contributing to high staff turnover: The King's Fund response to the NHS staff 3 per cent pay rise

Richard Murray, Chief Executive of The King’s Fund, commented on the government’s decision this evening to offer NHS staff a 3 per cent pay rise, as recommended by the independent Pay Review Body

A new Institute for Government paper warns that the UK government’s post-Brexit UK Shared Prosperity Fund (UKSPF) – replacing EU ‘structural funds’, to be launched in April 2022 – risks damaging trust between the UK and devolved administrations and undermining the UK government’s key objective of binding the four nations of the UK closer together.

Julian Jessop, Economics Fellow at free market think tank the Institute of Economic Affairs, commented on the government borrowing figures for June published by the Office for National Statistics

IFS - No relief for Rishi Sunak as he prepares for Spending Review: lower-than-expected borrowing likely to prove only temporary

Despite improving public finances this year, the Chancellor is likely to have very little room for manoeuvre in his forthcoming Spending Review. That is because while the economy is recovering more quickly than expected at the March Budget, this may not translate into a permanent improvement in the economic outlook.

Civitas: Former Social Security Secretary’s plans to let elderly insure against the need to sell homes to pay for Social Care to be debated in parliament

Given the new Health and Social Care Secretary’s commitment to set out “the general sense of direction” of his plans to reform social care “quite soon”, a former Social Security Secretary (1992-1997), Lord (Peter) Lilley has introduced a Bill to enable homeowners to insure against having to sell their homes to pay for social care, at little or no extra cost to the taxpayer.

JRF: Planned cuts to Universal Credit will hit incomes of millions of households unable to afford a minimum living standard

The Joseph Rowntree Foundation and the Centre for Research in Scoial Policy at Loughborough University publish the annual A Minimum Income Standard for the UK in 2021 report.

Julian Jessop, Economics Fellow at free market think tank the Institute of Economic Affairs, recently (09 July 2021) commented on the 0.8 per cent GDP increase in May.