IPPR’s analysis of the trade deal, published the day after Boxing Day, warned that the deal gave ministers considerable scope to roll back workers’ rights and environmental protections.

A 2018 IPPR study showed that rolling back the Working Time Directive would be unpopular with both ‘remainers’ and ‘leavers’ with around three quarters saying they should be ‘retained or tightened’ rather than ‘relaxed or removed’.

“The report in the Financial Times that the government plans to 'rip up' EU working time rules would be bad for workers, damaging for UK-EU relations, and deeply unpopular with the public.

“The proposal would risk retaliation from the EU for breaking the 'level playing field' commitments in the UK-EU trade agreement, including the potential triggering of tariffs on UK exports. While the agreement does not prevent reductions in labour standards in all instances, it does so where it can be proved that there is an impact on trade or investment between the UK and the EU. This flagrant act of deregulation could meet that test.

Marley Morris is available for interview

The IPPR paper, The Brexit EU-UK trade deal: A first analysis by Marley Morris, is available for download at: https://www.ippr.org/research/publications/the-brexit-eu-uk-trade-deal-a-first-analysis

The 2018 polling on working time is available in the IPPR report Leaving the EU, not the European model? New findings on public attitudes to Brexit which can be downloaded here: https://www.ippr.org/research/publications/leaving-the-eu-not-the-european-model

Figure 1 from the above publication: 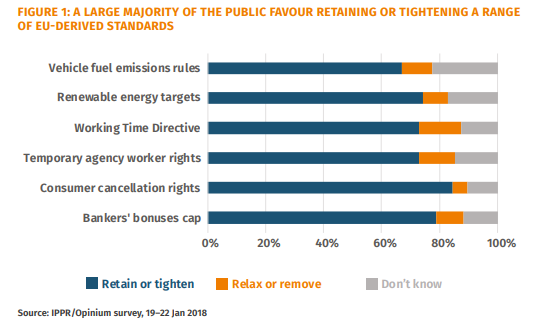 Further IPPR research on post-Brexit workers’ rights is available in the 2018 report A Level Playing Field for Workers: The future of employment post-Brexit by Marley Morris: https://www.ippr.org/research/publications/a-level-playing-field-for-workers

Julian Jessop Economics Fellow at free market think tank the Institute of Economic Affairs, commented on reports that the Chancellor will extend the stamp duty holiday until June

Improving the retention of NHS staff has been a long-term policy challenge, and will be of even greater importance in the aftermath of the Covid-19 pandemic.

In a free society there should be “no right not to be offended”, says IEA expert

Marc Glendening, Head of Cultural Affairs at free market think tank the Institute of Economic Affairs, commented on Merseyside Police’s decision to apologise for claiming “being offensive is an offence” as part of a campaign to encourage people to report hate crime

Yesterday’s report from The King’s Fund, Integrated care systems in London: Challenges and opportunities ahead, finds that health and care organisations across London have worked together more closely than ever before to improve and join up services in response to the Covid-19 pandemic.

IEA - Back to school and beyond: Time to fix longstanding problems in education, says new research

Professor Len Shackleton, Editorial and Research Fellow at free market think tank the Institute of Economic Affairs, responded to the UK’s Supreme Court ruling that Uber must classify its drivers as workers rather than self-employed

IEA responds to Sir Keir Starmer’s speech on the economy

The emerging consensus to prioritise school reopenings is welcome. But how the return to school is managed is just as important as when. An optional return risks widening the gaps between disadvantaged students and their better-off peers. And even if the return to school is compulsory and soon, we will still need substantial additional support for poorer pupils.