In Paris, President von der Leyen and the College of Commissioners mark the start of the French Presidency of the Council of the EU

In Paris, President von der Leyen and the College of Commissioners recently (07 January 2021) marked the start of the French Presidency of the Council of the EU. 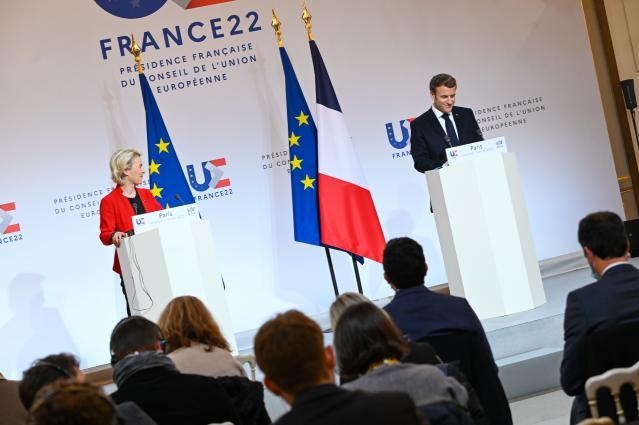 President of the European Commission Ursula von der Leyen, together with the College of Commissioners, paid an official visit to France on 6 and 7 January to mark the start of the 6-month French Presidency of the Council of the EU. The President and the Commissioners held meetings with the President of the Republic, the French Government and members of the French Senate and the National Assembly, and discussed key joint priorities for the months to come.

Speaking at a press conference together with Emmanuel Macron, President of the French Republic, President von der Leyen described the current political context in Europe and said that she was delighted that a country with the political weight and experience of France was taking on the Council Presidency at this delicate time. “France's voice resonates far and wide. And Europe is dear to France,” she said.

She continued with outlining an ambitious agenda for the next 6 months, from continuing the work on climate and digital transition, to stepping up security and defence efforts.

“The Commission has tabled detailed and ambitious proposals for achieving our objective of a 55% reduction in greenhouse gas emissions by 2030. We want to achieve this in a way that is economically efficient and socially fair”, President von der Leyen said, adding that she counted on the French Presidency to move these proposals forward.

Similarly, the common ambition to make Europe a true digital power needs to be maintained, and finalising legislation on digital markets and digital services is essential in that regard.

Economic growth is closely linked to both green and digital transitions, and President von der Leyen stressed the need to strengthen Europe's economic model that is both social and competitive.

The President also spoke about the need to preserve and strengthen the openness of EU's internal borders, as well as the management of its external borders. Furthermore, speaking of Europe's security, she said it was high time for the Europe of defence to move up a gear and stressed the need for a genuine Defence Union.

Lastly, President von der Leyen focused on EU's relations with Africa, Europe's support for the continent amidst the pandemic as well as plans to deepen EU-Africa partnership. “Africa is a key partner for the future of our continent because it is a geopolitical, economic and demographic space that will be essential in tomorrow's world”, she said. The EU and the African Union are planned to hold a summit in Brussels on 17-18 February.