New figures from the Office for National Statistics (ONS) reveal greater overall demand for British goods and services outside of the EU.

In the run up to October 31, exports to non-EU countries are growing twice as fast than those to the bloc, driven in large part by major non-EU trading partners including the USA and China, with total trade with the USA surpassing £200 billion for the first time.

The latest trade figures from the ONS show a 4.2% uptick in exports to countries outside of the EU, in comparison to a rise of 1.6% to EU member countries.

Demand for UK goods and services in China have also seen a significant increase in this period of 13.9%, from £20.8 billion to £23.7 billion, as the Department for International Trade’s (DIT) presence at the Beijing Expo 2019 comes to a close.

In the lead up to the Rugby World Cup—now in its second week—UK exports to Japan have seen a rise of 9.2% from £13.1 billion to £14.3 billion in the year ending June 2019. UK firms such as Harrod Sport and Sports Travel Hospitality have made the most of the major sports event to export their goods and services to the country, securing contracts at the games for their products including hospitality packages and supplying rugby goal posts. 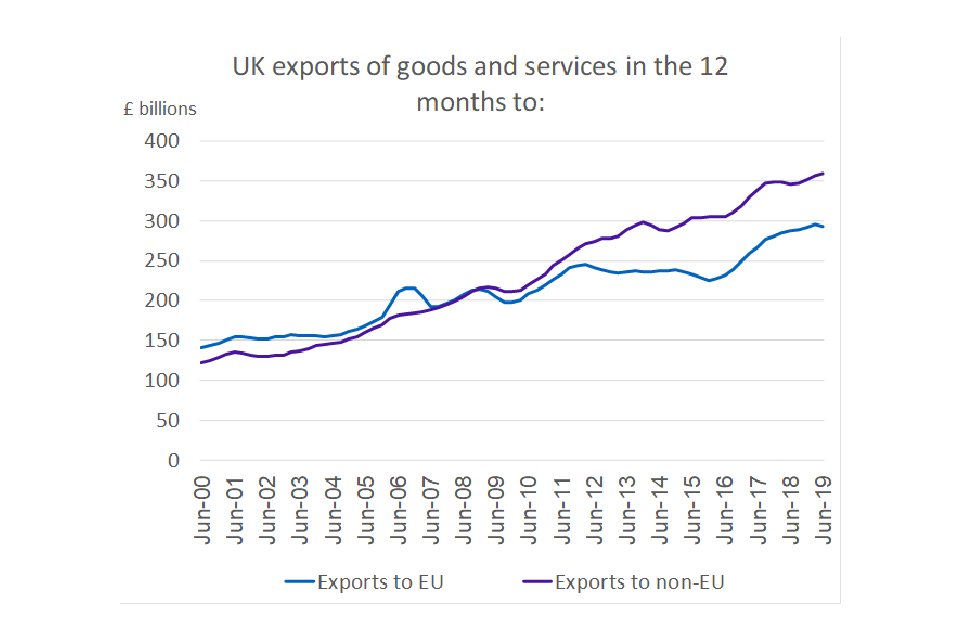 Leaving the EU provides the UK with great opportunities to form closer relations with countries outside the EU bloc.

Following my recent trips to the US and Japan, it is clear to see the potential that trading with our close friends across the world brings to the UK economy.

Businesses are already making the most of opportunities such as the Rugby World Cup to take their products to market abroad.

And there is so much more to gain. When we leave the EU, we will open more of these markets up to help UK businesses seize the opportunities in front of them.

The Developing Countries Trading Scheme (DCTS) will help UK businesses access hundreds of products from around the globe at lower prices, reducing costs for UK consumers.

The UK yesterday signed its second trade and economic Memorandum of Understanding (MoU) with a US state – North Carolina.

Trade Secretary Anne-Marie Trevelyan will today [20 July] launch negotiations between the UK and Israel for a new, innovation-focused trade deal.

A UK-Africa trading partnership for the 21st century

Speech delivered yesterday by the International Trade Secretary at Invest Africa's Africa Debate, at the Guildhall in London on the UK's trade relationship with Africa.