Ministry of Defence police officers share their stories and perspectives.

With the theme for this year’s International Women’s Day (8 March) being “Choose to Challenge”, we focus on the ongoing challenge to improve representation of women in the Ministry of Defence Police (MDP) and more widely in UK armed policing roles.

This year marks the MDP’s 50th anniversary, having been first established in October 1971. At that time there were no female police officers in the force. It was not until 1974 that 2 female sergeants transferred into the MDP from Strathclyde Police. The first 4 female recruits then started their training in 1975.

The MDP is now a very different and much more diverse organisation, with women represented at all ranks from Constable to Assistant Chief Constable, working in the same roles, with the same kit and the same weapons as their male colleagues. There has clearly been much progress but, the need to encourage more women to pursue a career in armed policing is still present.

Recruiting female officers remains a challenge for us as it is for many police firearms units in other forces, and we’re committed to improving representation of women in the MDP.

Our officers, including myself, are sharing our stories on joining the MDP and our lived experiences on working in armed specialist policing roles, to show the range of career opportunities available. 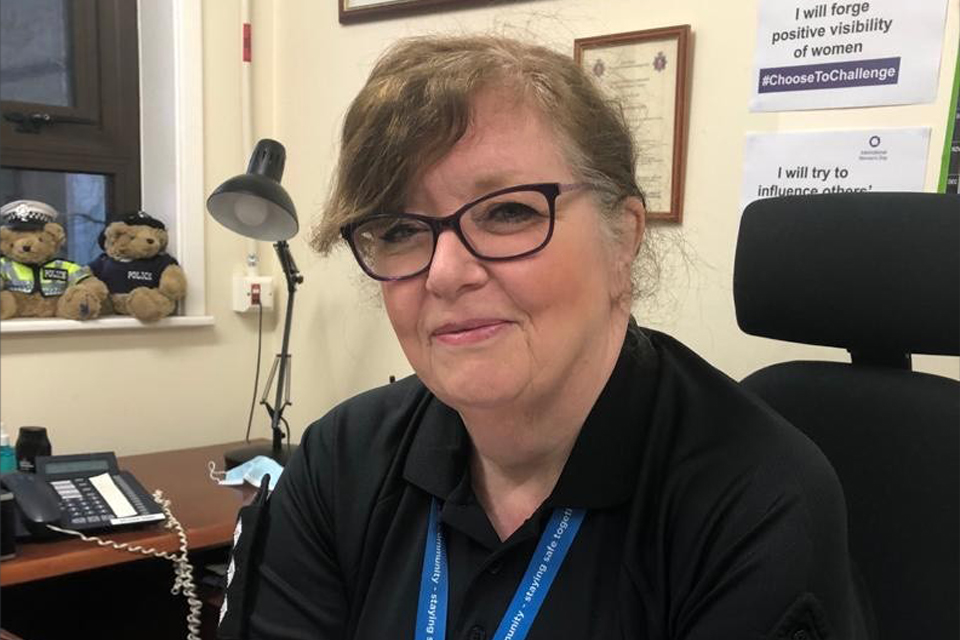 My MDP career began in 1987, as a Constable at Clyde and I’m very proud that I have now returned to the station as a Senior Police Officer. When I first joined, I was issued with a small pistol, an equally small truncheon and handbags and skirts were the norm.

After a few years, I transferred with the MDP to London and I had the opportunity to carry out both armed and unarmed duties, gaining promotion over time and transferring to iconic UK sites such as Portsmouth and Whitehall. My career highlights include planning for the initial arrival of the Queen Elizabeth Carrier at Portsmouth, setting up the first Women’s Staff Association within Defence, being the first female Initial Firearms Commander in the MDP and working with some truly superb people.

I am a single parent of 2 children (now adults). As they were growing-up, I was able to pursue my career goals, with the support of my fantastic parents and family, and the flexibility and support of my managers and colleagues. I worked permanent nights for a time, to assist with childcare and I was always first in queue for breakfast club at the primary school, wanting to get home to get some sleep!

Being a single parent in any career is always a question of forward planning and having a support network and a continuity fall-back. In the MDP, I can personally vouch for the fact that raising children on your own is not a barrier to success, with policies, diversity networks and understanding managers there to support you along the way. 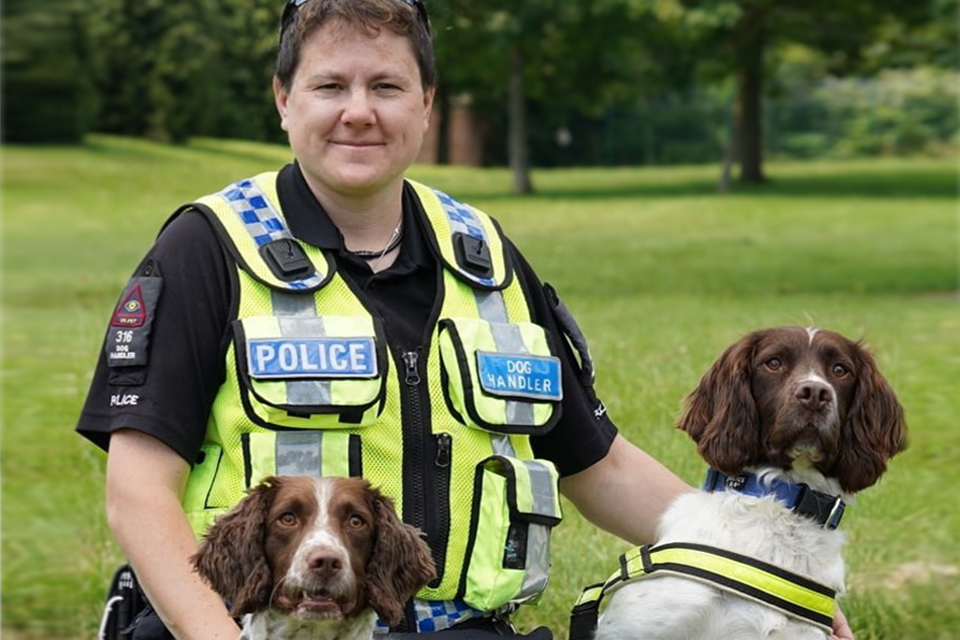 I joined the MDP in 2008 with the aspiration of becoming a dog handler. I was lucky to achieve this at my first station. I am currently based at HM Naval Base Devonport with my two specialist, explosive and drugs search dogs.

As an MDP dog handler, my role includes tracking suspects, property searches for evidence at scenes of crime, drugs searches and defensive searches for VIPs. I deploy to Defence locations across the UK and provide specialist support to other police forces.

Throughout my career I have always been particularly interested in how dogs learn and develop within their roles. This has now led me to a new career path as an instructor, to deliver training and develop police dog teams within the Force. I’m so proud to say that I will soon be the first female MDP police dog instructor and as part of my training role I look forward to assisting and supporting other women to progress in a police dog handling career. 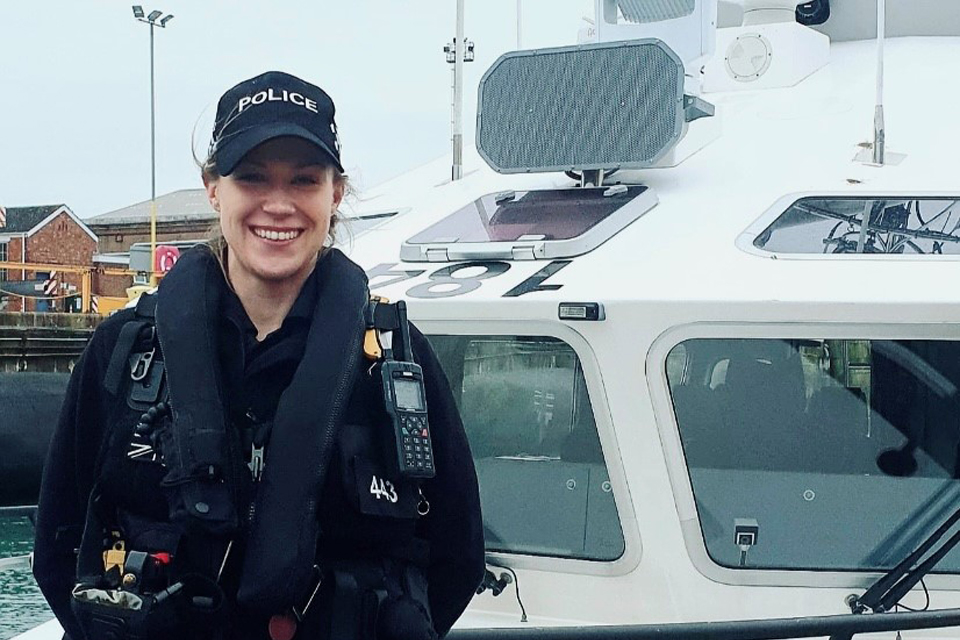 Kirsty is a Day Skipper at HM Naval Base Portsmouth. Crown copyright.

I joined a Home Department Police Force when I was 18 years old and after just over 10 years, I decided that I would like a change. I researched the MDP and was interested in the opportunity to carry out unique specialist policing roles.

I am currently qualified as a Royal Yacht Association (RYA) Day Skipper at HM Naval Base Portsmouth and I’m working towards a RYA Coastal qualification. My proudest moment has so far been passing an Operational Firearms Commanders’ course.

My most memorable experiences include escorting the HMS Queen Elizabeth and HMS Prince of Wales carriers, whilst having to negotiate a busy sea channel carrying passenger ferries and commercial shipping. My next challenge… I aim to become an MDP Marine Unit Sergeant. 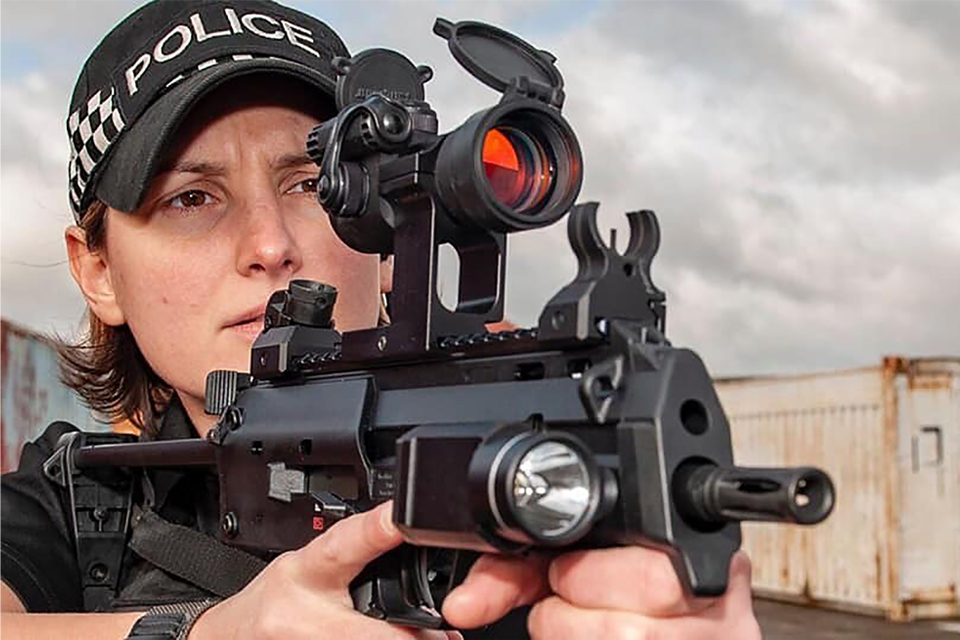 Sally is an Escort Commander on the MDP Special Escort Group. Crown copyright.

After graduating with a degree in Archaeology, I ran the Students’ Union and then went on to hold management roles in sales and catering before starting my policing career.

I chose to join the MDP because I wanted to work in a role where I could specialise as an Authorised Firearms Officer, right from the beginning of my career. The MDP also had, and still has, the largest Marine policing capability in the UK and that was a specialist area of policing that I was keen to get into.

The best thing about my career with the MDP has been the variety, from the Atomic Weapons Establishment sites in Berkshire, to the Operational Support Unit, to the HQ Operational Training and Capability Centre, to the Marine Unit at HM Naval Base Portsmouth, to a range of secondments at MDP HQ, I have enjoyed them all.

One of my proudest moments was representing the MDP as part of Operation Herrick, where I had the great privilege of mentoring the Female Afghan Police. I was also very proud to qualify as a Team Leader within 6 months of joining the Special Escort Group (SEG) and consequently becoming the first qualified MDP female Escort Commander and Rail Convoy Commander.

I am now working towards my goal to achieve substantive Chief Inspector rank and I look forward to continuing to develop in my career, whilst encouraging and mentoring my colleagues to help them achieve their full potential too. 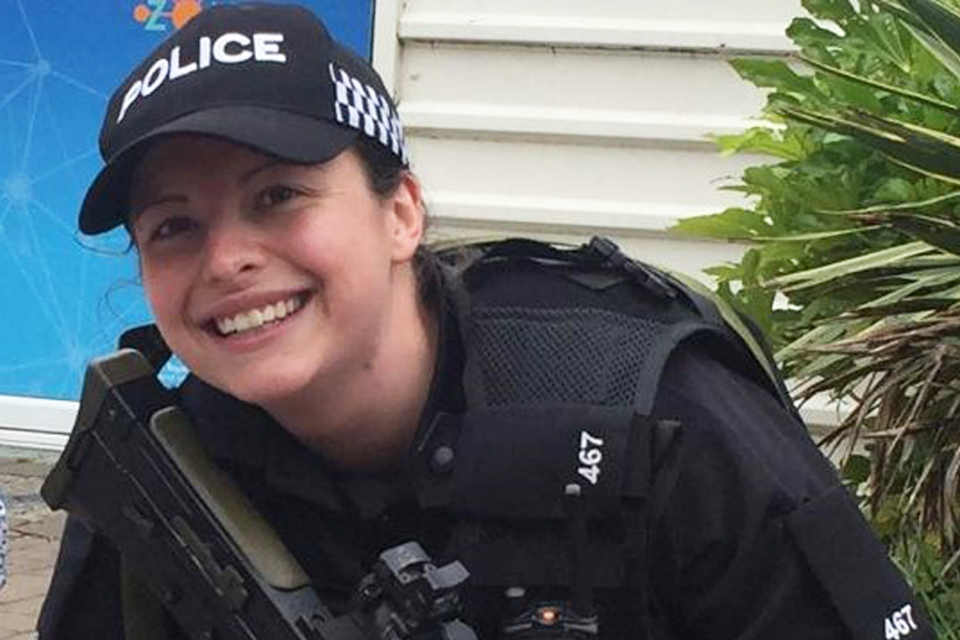 Nicole is a T/Police Sergeant at HM Naval Base Clyde. Crown copyright.

I always wanted to be a police officer and before joining the MDP I studied and graduated with a BA (Hons) in Criminal Justice. I decided to join the MDP because I wanted a role that offered a stable work life balance and plenty of opportunities for promotion and career development.

I’ll never forget when I graduated as a new recruit from “Orange Class” with my super excited daughter watching throughout, dressed in orange for the occasion! After my graduation I was then immediately deployed as part of Operation Temperer, following the Manchester Arena attack in 2017. Now, almost 4 years into the job, I’m working as a T/Police Sergeant, I’m a Force Personal Safety Training Instructor and I lead the Clyde Support Team in delivery of Project Servator, protestor removal and search requirements.

I am very proud of everything that I have achieved so far and the MDP has well and truly lived up to my hopes for opportunities to progress and develop in a specialist policing career.

Ministry of Defence Police officers and staff are sharing their #ChooseToChallenge statements on social media throughout this week on Facebook and Twitter:

Find out more about the work of the MDP and their specialist policing capabilities.