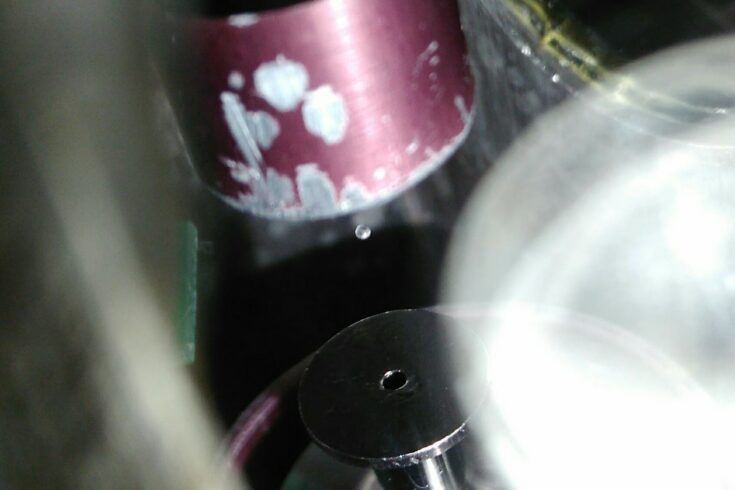 The project was undertaken by a UK team supported by UK Research and Innovation (UKRI) involving:

They were able to study aerosol droplets using acoustic levitation. That is, using sound waves to ‘trap’ a single millimetre sized droplet over several hours.

Air pollution doesn’t come solely from car exhausts and fossil fuel power stations and almost all the fatty acids in the urban atmosphere are there through human activity. For example, being released from oil and fats during cooking.

Therefore, by understanding how long they last in the atmosphere, and how far they spread to different places, we can work on ways of controlling their impact. This acoustic levitation technique allows key observations to take place to help us do this.

In collaboration with Dr Andy Ward, from STFC’s CLF Octopus facility, a laser-based Raman microscope was combined with acoustic levitation for use on the I22 beamline at Diamond Light Source. Installing the system on the beamline at Diamond allowed the Raman technique to be used simultaneously with small-angle and wide-angle x-ray scattering.

Being able to collaborate with our colleagues at Diamond has added another dimension to this work. Accessing both real-time chemistry and structure is such a powerful technique to study these materials.

The dual technique allowed the researchers to understand the physical and chemical changes that take place in aerosol droplets under changing humidity, and changing concentrations of ozone.

The crust this research found forming around the droplets can protect the fatty acid aerosol particles from oxidation, and allow them to survive for longer in the atmosphere.

The longer they survive for, the further the droplets can travel on air currents. This crust can also protect other harmful chemicals in these droplets from being broken down by oxidation, so they survive longer and travel further, too.

This is an important result because it shows that air pollution can travel long distances from the location where it was produced. This potentially impacts larger areas of the atmosphere and environment than would be the case otherwise.

This research has been supported by:

Diamond Light source is funded by STFC and The Wellcome Trust.

Read the full paper on the Atmospheric Chemistry and Physics website​.

On the CLF website, find out about previous work that the paper builds on.