The Chief of the Air Staff yesterday announced the RAF’s role in the launch and operation of a demonstrator satellite. Now in orbit, the Carbonite-2 offers sovereign, full-motion colour video from space for the RAF for the first time.

The RAF has been working with the MOD’s Chief Scientific Advisor, Defence Science and Technology Laboratory and UK industry on the programme to deliver high-quality imagery and 3D video footage from space. The first satellite of its kind, the Carbonite-2 has completed its initial checks and is now supplying detailed imagery and footage.

The ambitious programme could eventually see high-tech satellites beaming video directly into the cockpit of fighter jets, improving the situational awareness of UK pilots by giving them the very best imagery and information anywhere on Earth in real-time.

Chief of the Air Staff, Air Chief Marshal Sir Stephen Hillier made the announcement at Surrey Satellite Technology Limited in Guildford, the company behind the technology, to mark the successful launch and operation of the satellite.

It’s entirely fitting that we have launched this highly capable satellite in the centenary year of the Royal Air Force. We have always been at the leading edge of technology, constantly innovating and expanding our horizons. This satellite will not only expand further the RAF’s growing Air and Space capabilities, it will I hope also be an inspiration to those young people looking towards technology as a way to realise their potential. 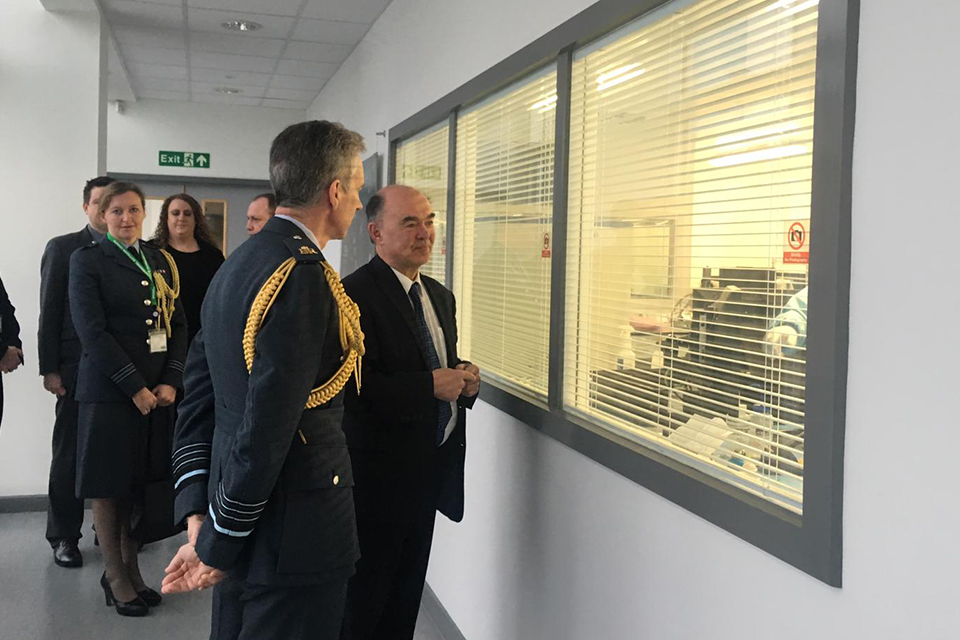 The Chief of the Air Staff today announced the RAF’s role in the launch and operation of a demonstrator satellite. Crown copyright.

The success of this satellite shows we are looking far beyond the skies when it comes to defending our country. We live in an increasingly dangerous world and satellite technology like this give our Armed Forces the extra advantage of quick video surveillance to keep us safe from a range of future threats, whether that’s an airborne terror attack or a troop of tanks closing in on a foreign border. Investing millions into Britain’s most innovative companies is helping us propel the UK forward in the space domain.

The Carbonite-2 will play a crucial role in the MOD’s understanding the potential for and shaping the RAF’s vision of an international constellation for the future. This could unlock new opportunities using a range of sensors and ground stations, which has the potential to support emerging crises and combat intensifying threats, giving the UK the opportunity to lead in the area with several close allies having already shown interest in the concept.

The MOD invested £4.5m into the programme with Surrey Satellite Technology just eight months ago, and the satellite was successfully launched from Sriharikhota in India. The 100kg spacecraft, roughly the size of an average household washing machine, carries an off-the-shelf telescope and HD video camera, both of which have been adapted for a space environment and integrated into a custom-built framework. The imaging system is designed to deliver high-resolution images and colour HD video clips with a swath width of 5km.

MOD’s science community is one of the driving forces of the UK’s space revolution; and this is an excellent example of defence science and technology working with industry and the Royal Air Force to deliver affordable and pioneering space technology quickly for our Armed Forces.

The historic moment comes as the RAF celebrates 100 years since its formation, and demonstrates how the service is not only commemorating its history but also celebrating current success and looking forward to inspire future generations. To maximise the benefit of the experience and build expertise the RAF has placed a secondee with SSTL.

As set out in the Government’s Industrial Strategy, the UK Space Agency is also working together with industry to capture a 10% share of the global space market.

Space has applications across every part of our economy and is a vital part of our national capability. British companies like SSTL are the best in the world at what they do, making them a fitting partner for the RAF.

The MOD already has a world-leading role in satellite technology, with Skynet 5 delivering a resilient, sovereign capability until 2025, supporting secure communications for troops, command centres and cutting-edge unmanned vehicles. Beyond that, the MOD is fully committed to launching Skynet 6a and is looking to change defence structures to bring better operational coherence to activities for the future.

A new Cyber Regiment has been launched to protect frontline operations from digital attack as Defence continues its modernisation to combat the threats of tomorrow, Defence Secretary Ben Wallace yesterday announced.

The Defence Infrastructure Organisation (DIO) has completed and handed over to the Royal Navy a project at Royal Naval Air Station (RNAS) Yeovilton.

The Defence Infrastructure Organisation (DIO) has completed and handed over to the Royal Navy a project at Royal Naval Air Station (RNAS) Yeovilton.

The specialist contribution military reservists have made across society during Britain’s battle against coronavirus will help inform a review examining how defence can maximise the skills of its Reserve Forces.

Coronavirus recovery in prisons and probation

Prisons and Probation Minister Lucy Frazer yesterday set out how those services will start to recover from the restrictions imposed in response to coronavirus.

The way many of Veterans UK services are delivered is to be digitised as part of a new contract worth £300-million that successfully commenced on 1 June 2020.

The FAM pilot is now live across all three services after the third FAM pilot site launched at RAF Wittering.

The Defence Infrastructure Organisation (DIO) and Kier have marked the start of construction work to create a new headquarters at the Defence Medical Services (DMS) Whittington site with a turf-cutting ceremony.