The Serious Fraud Office (SFO) secured convictions against Jolan Saunders and his co-conspirators Michael Strubel and Spencer Steinberg in 2015, showing that the men deceived people into investing in Saunders Electrical Wholesale Ltd by lying about supply contracts. The fraudsters overstated minor contracts with the Hilton, Marriott, Plaza and Holiday Inn hotel chains and flatly lied about a non-existent contract to supply the Olympic village for the London 2012 Olympics. 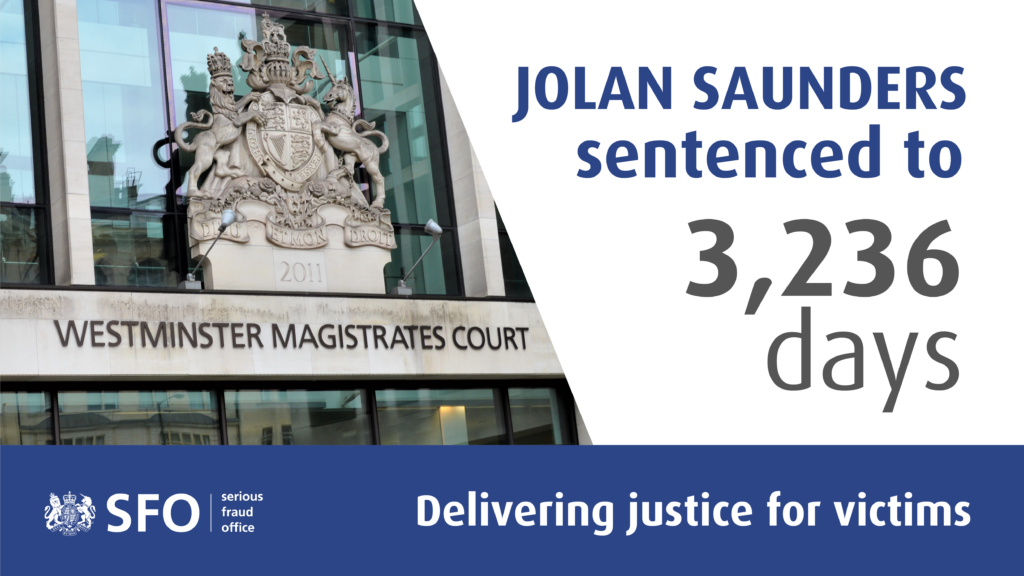 Saunders, Strubel and Steinberg took almost £80m from investors from their London base and spent it on yachts, expensive property and luxury cars. Jolan Saunders and Michael Strubel were each jailed for seven years, while Spencer Steinberg was jailed for six years and nine months.

After an investigation by the SFO’s Proceeds of Crime team uncovered that Saunders held millions of pounds in criminal assets, he was ordered to pay £5,262,301.03 to compensate his victims.

Despite the SFO showing clear evidence of Saunders’ £4.5m in hidden assets from his fraud, Saunders has made no attempt to use this money to pay his confiscation order. Instead, he has stalled and asserted, without evidence, that he hopes to pay the confiscation order through “major project works at blue chip hotels” – echoing the false claims he made to those whom he defrauded.

“With callous disdain for those he has harmed, Jolan Saunders has resorted to falsehoods and obfuscation to avoid paying compensation to the victims of his pernicious fraud.

“We will not allow him to do so. He has rightly been jailed and we will continue to fight to deliver justice and return compensation to his victims.”

Following his failure to take steps to pay his confiscation order, the Court activated Saunders’ default prison sentence. Saunders has been imprisoned for 3,236 days, or just under nine years.

The Serious Fraud Office (SFO) fights complex financial crime, delivers justice for victims and protects the UK’s global reputation as a safe place to do business. We investigate and prosecute the most serious or complex cases of fraud, bribery and corruption. We also recover the proceeds of crime worldwide.

Under Director Lisa Osofsky, we have secured convictions against 21 individuals and companies, recovered over £1 billion of illicit gains, and secured eight agreements with companies including Serco, G4S and Airbus, compelling them to pay penalties and reform to prevent future law-breaking.

The Serious Fraud Office (SFO) has recovered £567,466.53 from personal bank accounts linked to a former fixer for the Petrofac group.

The Serious Fraud Office (SFO) will be returning over £1 million to more than 200 victims, following one of the largest boiler room frauds ever pursued by a UK authority.

On Wednesday 27 April, teams of SFO investigators across the UK issued notices under Section 2 of the Criminal Justice Act 1987 at addresses linked with Sanjeev Gupta’s GFG Alliance, also known as the Liberty House Group of companies.

The SFO is conducting a criminal investigation into the business practices of individuals associated with Arena Television Limited and its linked entities.

SFO investigation delivers over £200,000 compensation for the people of Nigeria

Over £200,000 in compensation obtained by the Serious Fraud Office (SFO) investigation into Amec Foster Wheeler Energy PLC, will be given to the people of Nigeria after a UK-Nigeria Memorandum of Understanding was signed yesterday.