Looking back: memorable cultural moments in the Midlands

As the Arts Council reaches its 75th anniversary, we've been reflecting on some memorable moments of publicly funded culture and creativity in the Midlands. From the TikTok museum sensations and the birth of heavy metal music, to almost a million handmade ceramic poppies to mark the lives lost in WW1– each of these spectacular moments has brought amazing cultural experiences to people in the Midlands and beyond.

Set across 26 acres, the open-air, living museum features carefully reconstructed shops, houses and industrial areas tell the Black Country’s story, bringing history to life with sites, smells and tastes of the region, showing visitors how steam power and an increasingly interconnected world transformed the region into a manufacturing powerhouse.

The idea all started in the late 1960s – a time of great change for the region. By 1978, a site on Tipton Road was secured and a preview season held to show how the Museum might develop. Since then, BCLM has grown, adding more historic buildings and stories of local people and today includes a Victorian schoolhouse, 1920s cinema, a 1930s fish and chip shop, baker’s shop and sweet shop. It’s also been used as a set for the BBC’s infamous Peaky Blinders, a mass Covid19 vaccination centre and become a TikTok sensation! 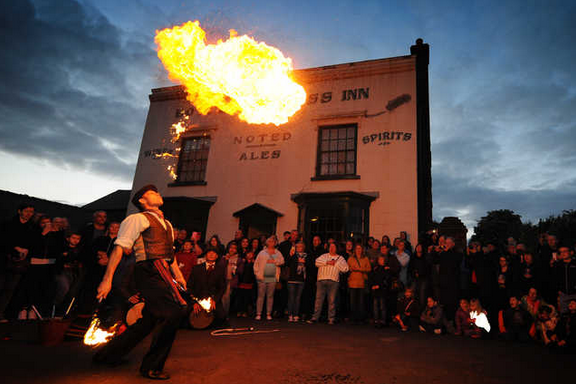 2. The opening of Nottingham Contemporary, 2009

Nottingham Contemporary’s iconic green and gold building designed by Caruso St John Architects is a RIBA Award-winning building and is one of the largest contemporary art institutions in the UK. Celebrating Nottingham’s heritage, the building takes inspiration from the historic Lace Market quarter of the city, referencing the design of the warehouses that serviced Nottingham’s famous lace industry and the concrete facade is embedded with a mid-19th-century cherry blossom lace design, which was discovered in a time capsule buried on the building’s site.  Since opening in 2009, it’s welcomed more than two million people and presented more than 50 exhibitions of international art – welcoming more than 20,000 people a year to take part in learning activities– all for free. 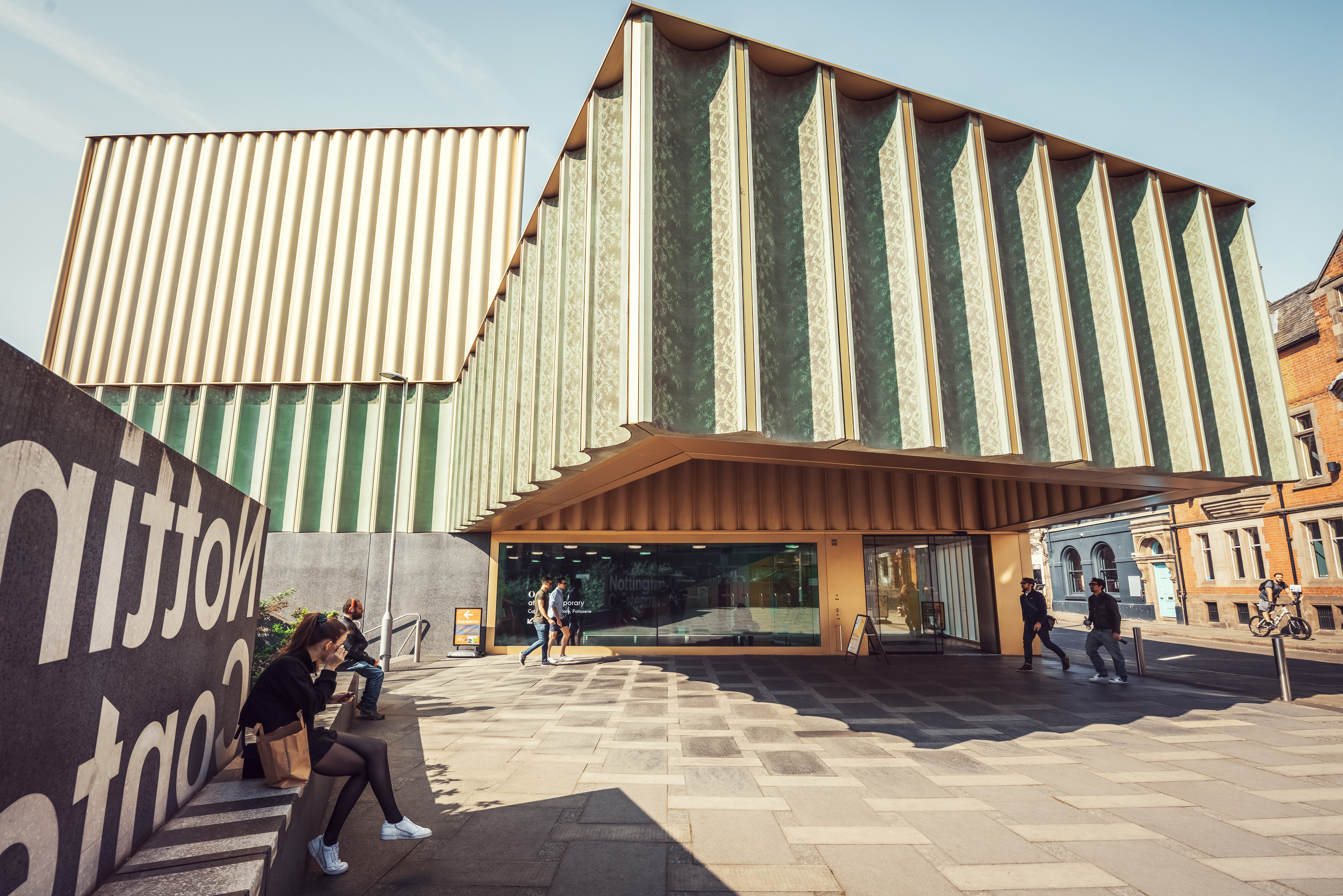 Matilda The Musical premiered at the RSC’s The Courtyard Theatre in Stratford-upon-Avon in November 2010, playing to sold-out audiences before transferring to London’s West End. Winner of 99 international awards, the musical from the Royal Shakespeare Company is inspired by the beloved book by the incomparable Roald Dahl and features original songs by Tim Minchin. From the UK, to America, Australia and South Korea, Matilda is still wowing audiences, returning for post-pandemic shows in September 2021. 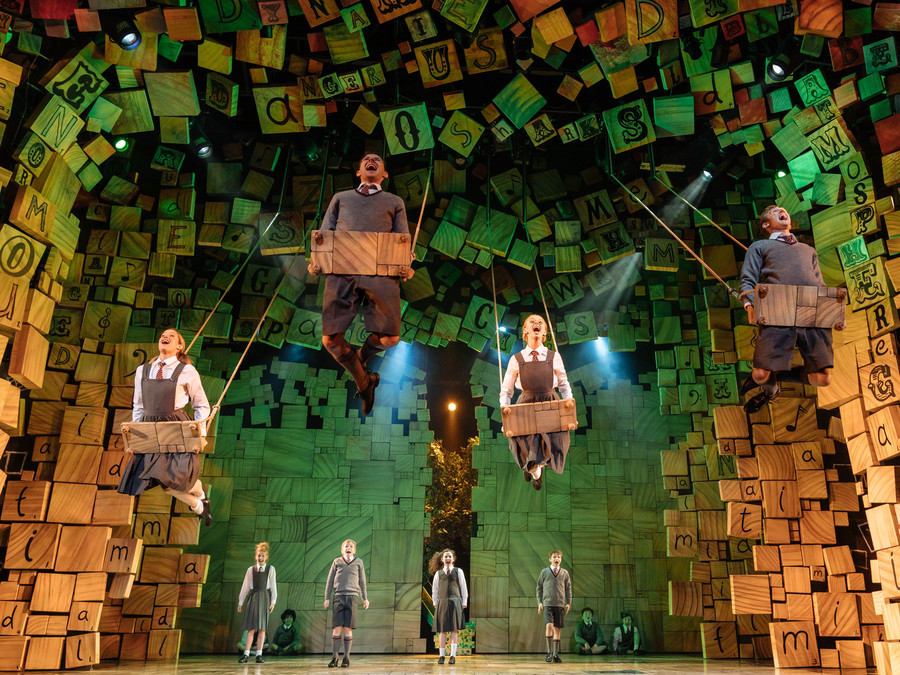 4. Celebrating the birthplace of heavy metal with Home of Metal, 2011

Run by Capsule, Home of Metal’s exhibitions and events joined the dots between music, social history, visual art and fan cultures to produce a new perspective on Heavy Metal. One that was celebratory, eschewed notions of high/low art and connected audiences and performers, Home of Metal was devoted to the music that was born in and around Birmingham. Spanning galleries and creative spaces across the region, Birmingham Museum, the MAC, Wolverhampton Civic and New Art Gallery Walsall. It even included memorabilia, visits and performances from the Midlands’ very own Tony Iommi and Ozzy Osbourne! 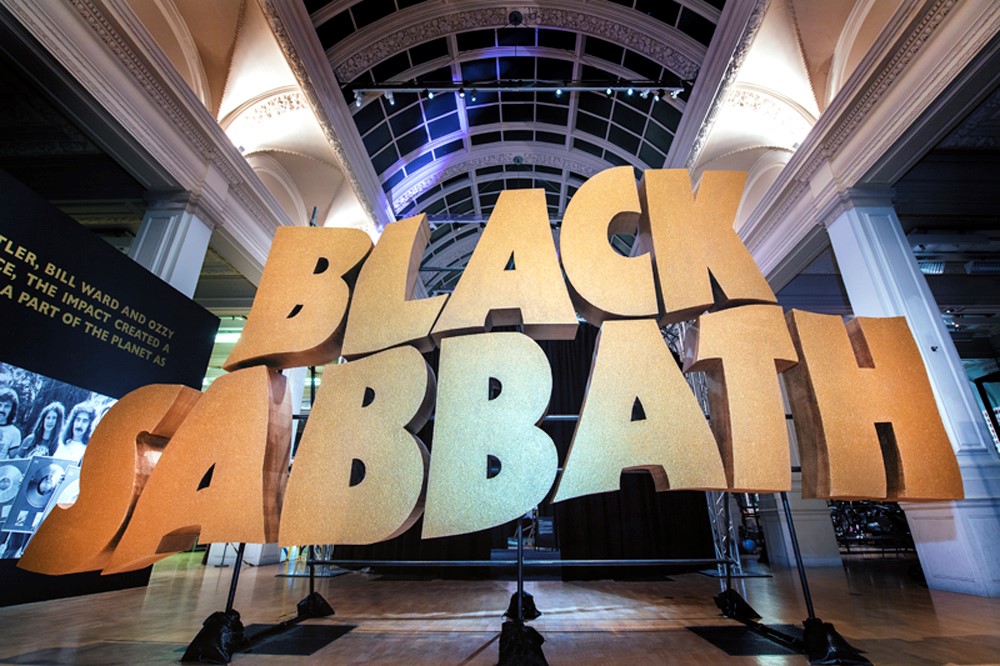 The cultural celebrations surrounding London 2012 were a fantastic opportunity for Arts Council England to showcase spectacular arts and culture to a huge audience, many of whom rarely participate in cultural activities. Highlights of the 2012 Cultural Olympiad in the Midlands included:

Lionheart – the largest single-handed crochet sculpture in the world. Artist Shauna Richardson spent two years hand crocheting three giant lions out of 36 miles of locally sourced ‘Swaledale’ wool. Harking back to the days of the travelling menagerie show and celebrating the rich textile heritage of the East Midlands the giant hand-crocheted lions, a unique representation of Richard the Lionheart’s crest, travelled the region and beyond in a 16 metre illuminated glass case from May to October 2012. 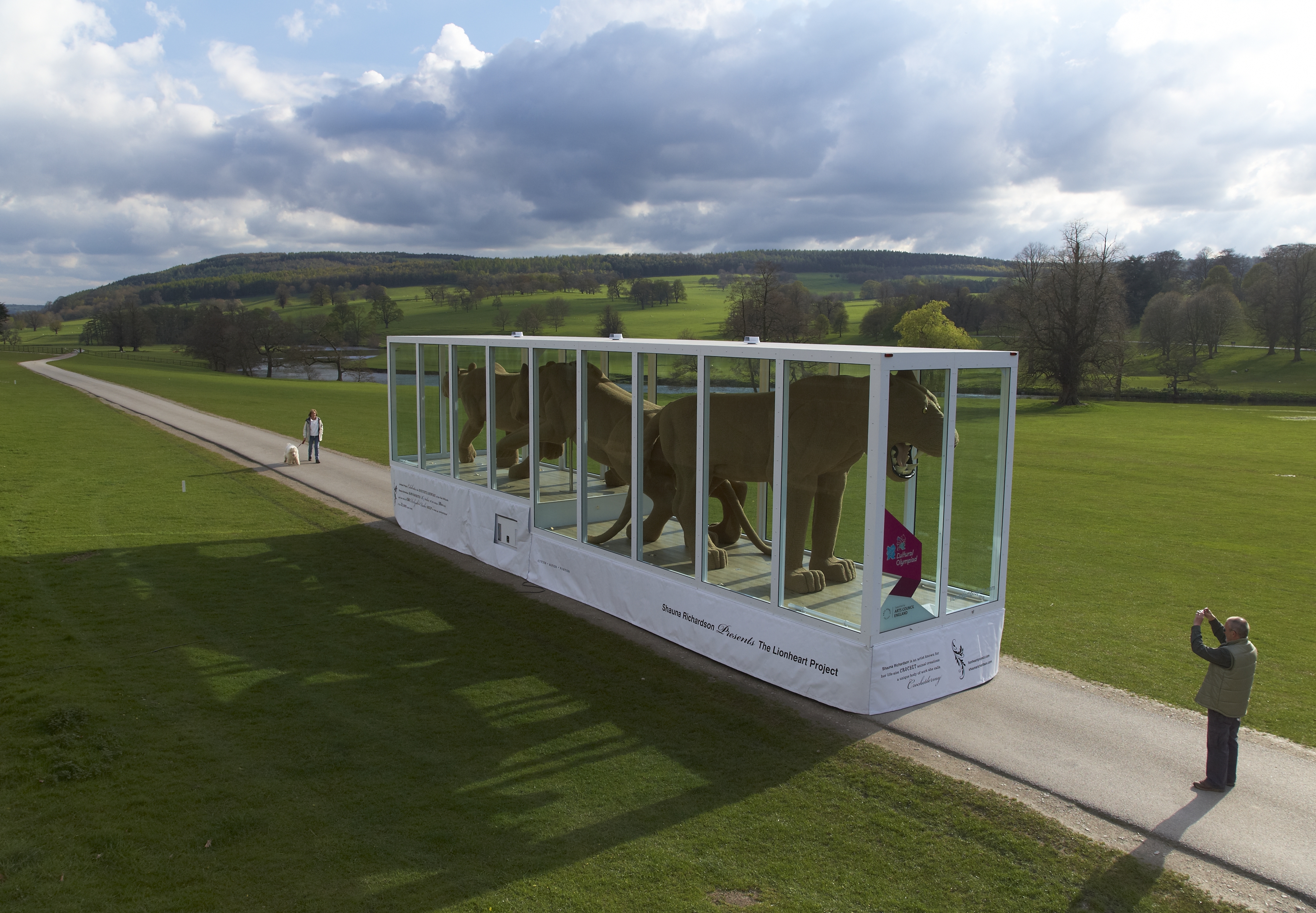 Stockhausen - performed at the Argyle Works in Digbeth and live streamed all over the world, Birmingham Opera Company was the first company to stage a full performance of 'Mittwoch', one of seven operas - one for each day of the week. The ground-breaking performance included a string quartet performing mid-air in four helicopters, playing a synchronised, polyphonic composition where the sounds of the instruments melded with the sounds of the rotor blades, while the audience watched live on video screens.

Past Lives was a touring project which visited eight regions of the Midlands over three years - Bolsover, Buxton, Derby, Ilkeston, Ironbridge, Mansfield, Nottingham, and South Holland gathering amateur cine film home movies, photos, local music and oral history. The powerful project worked with film depositors and local people to give them a chance to share their own social history and speak of everyday past lives, and make new films and music scores performed by international musicians, with a grand finale held in each region to show the local movies.

To commemorate the 100th anniversary of the start of the First World War, Chesterfield artist Paul Cummins conceived and created installation, Blood Swept Lands and Seas of Red at the Tower of London between 17 July and 11 November 2014, made up of 888,246 handmade ceramic poppies, one for each British and Colonial life lost at the Front in the First World War. Each day thousands of poppies were ‘planted’ in the Tower’s moat by volunteers from across the world. The artist has been supported by Arts Council from the beginning of his career and during the Cultural Olympiad – and with five million visitors travelling to see the poppies, over £9 million raised for six service charities through the sale of the flowers, the installation was called a global phenomenon.

8. Remembering those lost in the Pandemic with Luke Jerram’s In Memorium, 2020

A temporary memorial for the public to visit and remember all those we have lost from the COVID-19 pandemic, In Memoriam by Luke Jerram is also made in tribute to all the NHS health and care workers who have been risking their lives during the crisis. In 2020 it came to Worcester’s Pitchcroft racecourse as part of the Arches project – and in the midst of the Covid19 pandemic created a sense of peace and space for people to visit while most cultural spaces were closed.

9. The valley that changed the world – Derby Museum of Making, 2021

This year, Derby Silk Mill – widely regarded as the site of the world’s first modern factory – has been reborn as the new Museum of Making, supported by investment from Arts Council England. Part of Derby Museums, the new Museum of Making opened its doors to visitors for the first time on 21 May 2021, showcasing a celebration of Derby’s industrial heritage, a 300-year history of innovation, design and manufacturing in the city. Visitors can encounter the newly renovated Grade I listed Bakewell Gates, which have stood at the front of Derby Silk Mill since 1725, and enter the new Civic Hall - a triple height glass atrium that forms the entrance to the new museum built around a seven-tonne Rolls-Royce Trent 1,000 engine, which is suspended from the ceiling above visitors’ heads!

Coventry City of Culture 2021 launched in May 2021, after facing several delays and challenges due to the Covid 19 pandemic. It finally opened with a world-first - a digital citywide event, Coventry Moves, which saw viewers from all over the country tune in their radios, computers and phone to engage and come together to mark the occasion.
Key events have seen the fantastic Terry Hall Home Sessions, the Herbert Gallery’s UnNatural History and 2 Tone: Lives and Legacies exhibitions, and the awesome Assembly Festival Gardens which is attracting the best of the Edinburgh Fringe to Coventry’s city centre.
We know the City of Culture title can make a huge difference to a city, and although Coventry had to wait a little longer for its time in the spotlight, it is already starting to see the benefits of its capital investment and its new public realm work. With plenty more to come Coventry’s year is shaping up to be spectacular! 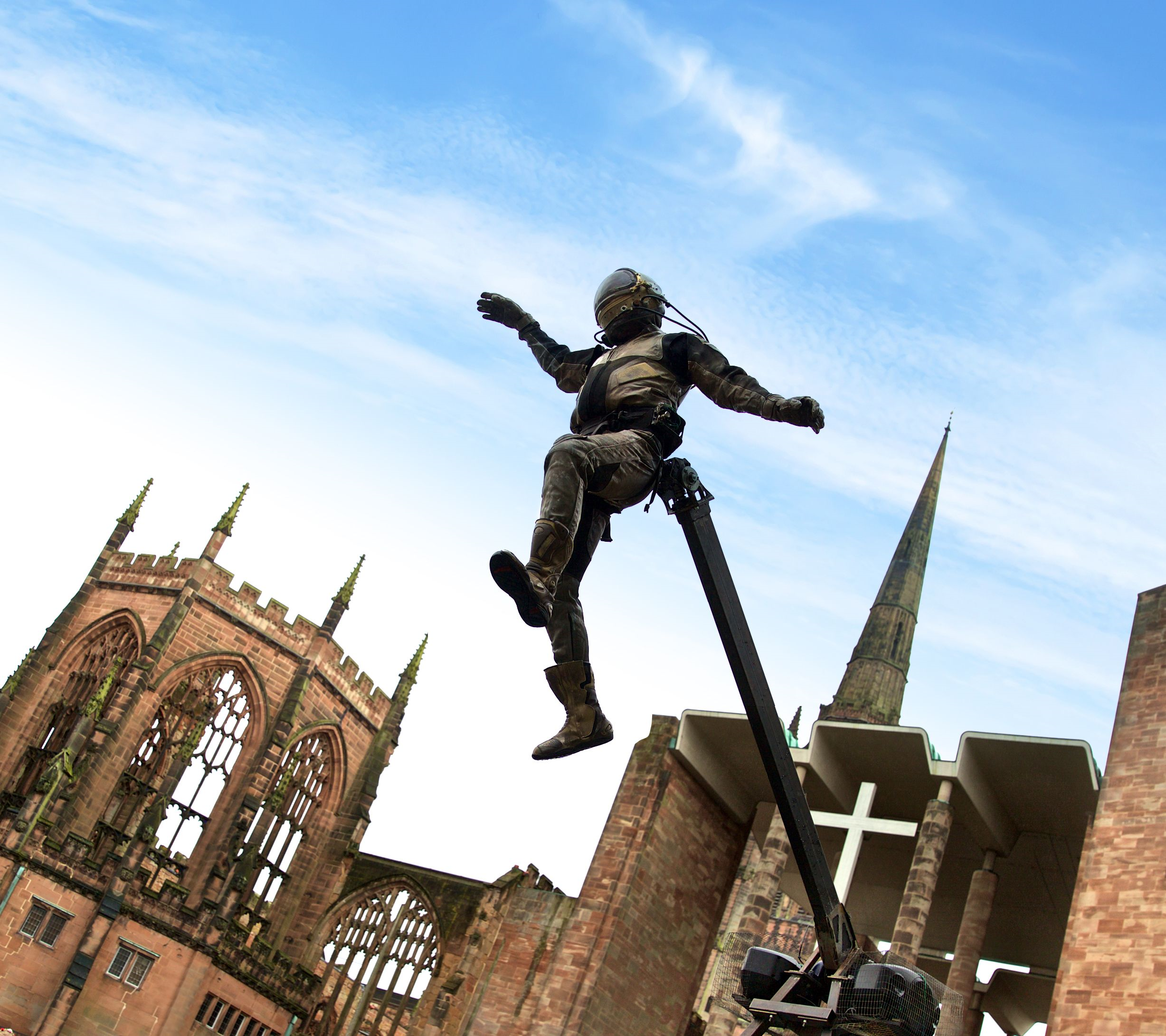 Today we announced funding of £2,780,000 to build a network of schools that will test a range of innovative approaches to teaching for creativity.

Theatre takes to the catwalk for London Fashion Week

Arts Council has announced a new place-based approach as part of our Delivery Plan for 2021-24 with 11 priority places across the South West - from the unspoilt Isles of Scilly up to the cathedral city of Gloucester and over to rural New Forest.

75 years of public investment in arts, culture and creativity: Share your #CreativeMemories

As we mark 75 years since our first Royal Charter, we’re sharing our top #CreativeMemories from the last seven and a half decades – and you can share yours too.

To mark our 75th anniversary, here's a run down of 10 facts and iconic cultural moments from the past 75 years...

Reconnect with culture outdoors across London

Are you looking to get back outdoors and enjoy culture again? London’s annual leading outdoor theatre and performing arts festival, Greenwich+Docklands International Festival (GDIF), is back for 2021 with a programme of free events to keep you inspired.