The anniversary, which takes place on Sunday 12 January, has also been commemorated at the Houses of Parliament with the Minister of State for the Armed Forces Anne-Marie Trevelyan, Minister for Defence Veterans and Personnel Johnny Mercer, and Commander Strategic Command General Patrick Sanders.

The Ministry of Defence hosted a reception in a Thameside pavilion at the House of Commons on 9 January to pay tribute to LGBT service personnel, past and present. 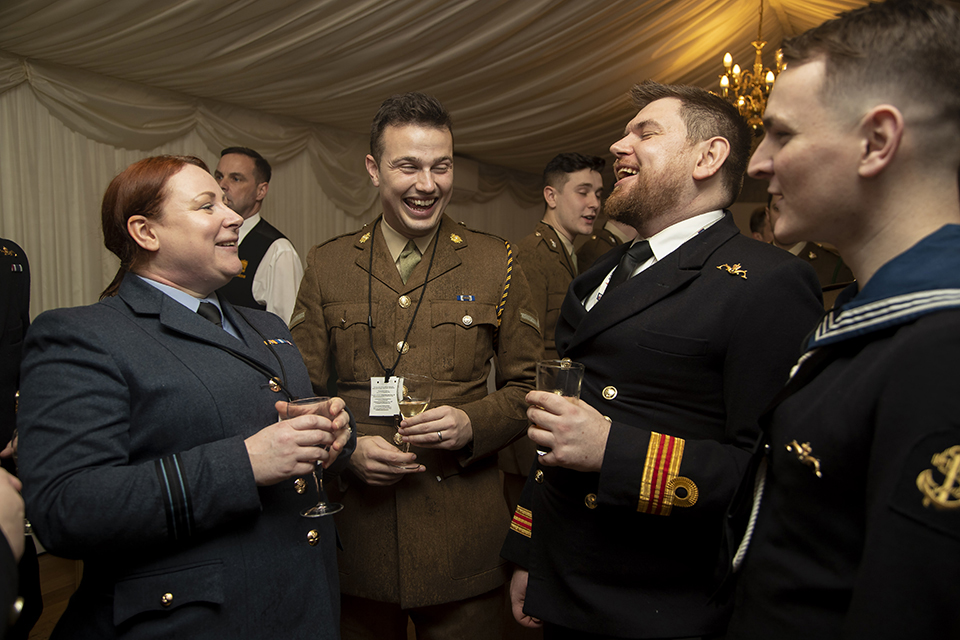 Members of the three Services enjoying the LGB20 reception

Personnel from the Royal Navy, British Army and Royal Air Force, as well as defence civil servants, were joined by senior figures in defence to commemorate the ban on LGB members of the Forces being lifted on 12 January 2000.

Pictures show military buildings, including the Ministry of Defence head office and Navy Headquarters, being lit in rainbow colours. Edinburgh castle and Wellington Barracks will also be lit this weekend and LGBTQ+ flags are being raised. 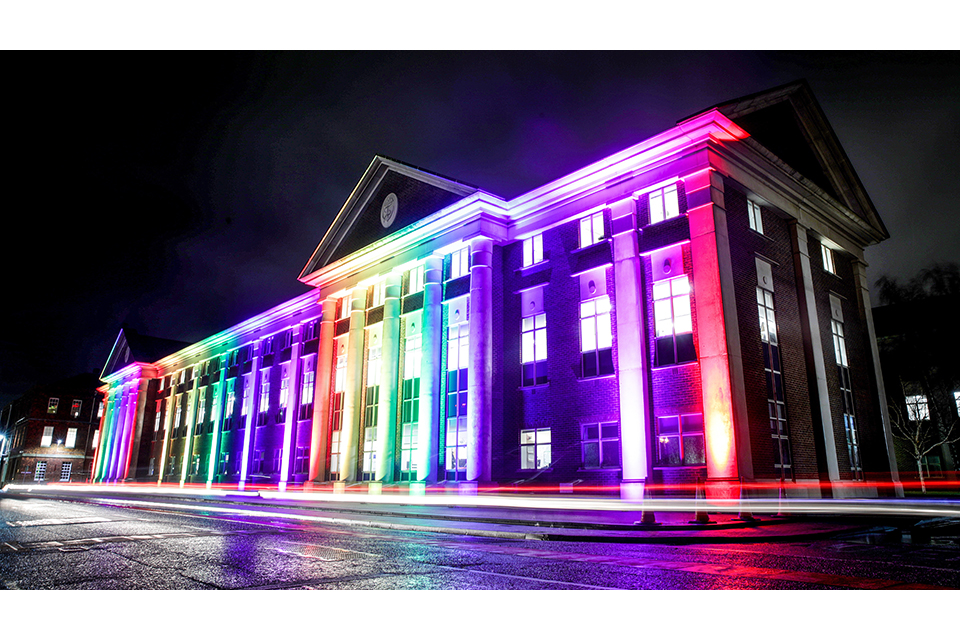 The Armed Forces have changed and evolved considerably in recent years to become the diverse, modern employer they are today.

This anniversary is a timely reminder of the fantastic contribution the LGBT community makes to the military, and our commitment to creating a truly inclusive place to work. 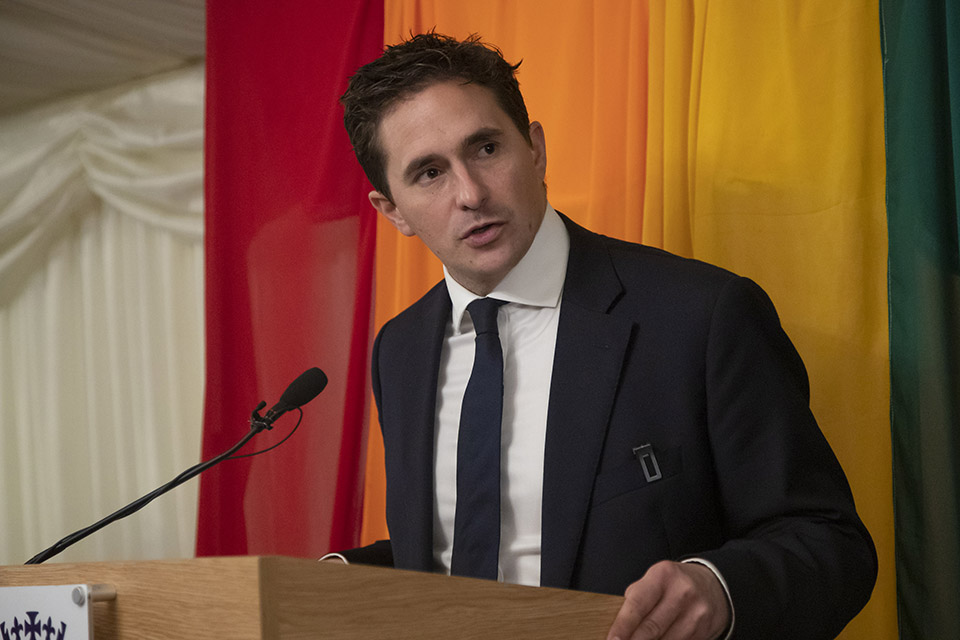 The only way to perform at your best in the Armed Forces is to put your whole self into what you do, which isn’t possible if you are hiding who you are.

We’re here to celebrate the fact that our Armed Forces are moving towards being even more inclusive and accepting than ever before, ensuring we are equal opportunity employers. 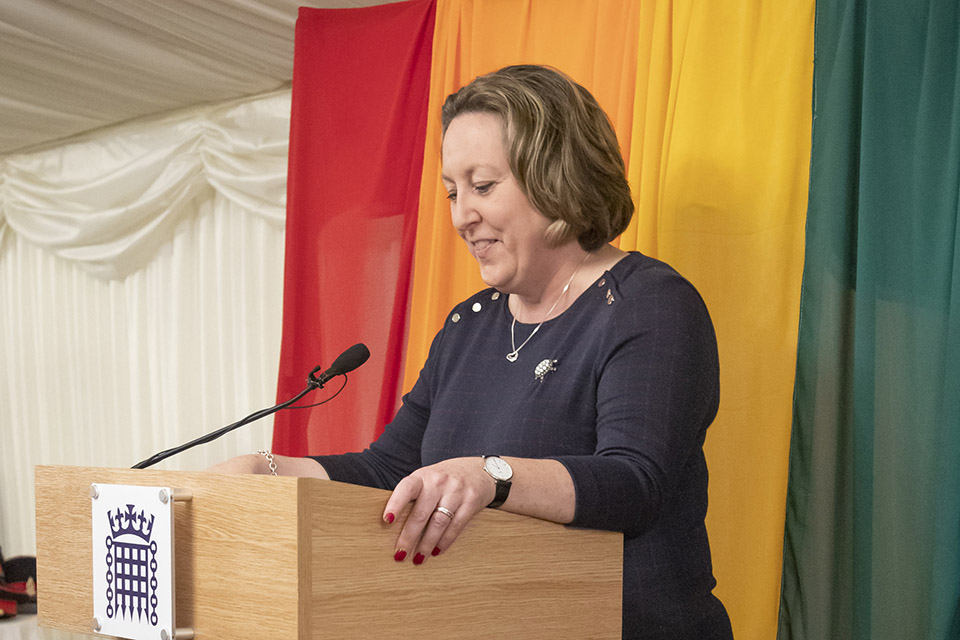 Anne-Marie Trevelyan, Minister of State for the Armed Forces, said:

When we look at what has already been achieved, we see that what we have witnessed over the last 20 years is nothing less than a culture-change for our Armed Forces.

We are committed to ensuring that every individual who is part of Defence can carry out their vital work free from discrimination and reach their full potential, as they protect our nation and way of life.

20 years ago being gay would have earned a dishonourable discharge from the Armed Forces. As a result of the changes made in the following years, all three services were recognised in Stonewall’s Workplace Equality Index in 2019, with the Royal Navy reaching 15th.

Among many changes made since 2000, Civil Partnered couples now receive the same benefits as married couples, and since last year same-sex couples have been able to co-habit in all Service Accommodation. Defence has a LGBT+ Champion and a range of active military and civilian LGBT+ staff networks that support personnel. The Parliamentary reception hosted LGBT Armed Forces personnel past and present, as well as Stonewall and members of the Royal British Legion. This event is one of many being hosted throughout the year to celebrate the Ministry of Defence’s commitment the LGBT community.

The most supportive organisations for Britain’s Armed Forces such as Microsoft Ltd, Greater Manchester Police and the Post Office from both the private and public sectors were announced yesterday, 30 July 2020.

Office for Veterans' Affairs marks one year since creation

An opinion piece from Johnny Mercer, Minister for Defence People and Veterans, to mark one year since the establishment of the Office for Veterans' Affairs. The article was originally published by the Telegraph.

UK troops deploying to the United Nations Peacekeeping operation in Mali have reached a significant training milestone in preparation for their mission, which starts in December 2020.

Maximising talent through diversity and inclusion

Chiefs of Staff across defence have written a letter setting out their collective commitment to improve diversity and inclusion.

Facilities to house the Poseidon MRA Mk1 fleet have been handed over to Defence Equipment and Support (DE&S), marking a major milestone in the Poseidon programme.