Nine soldiers of the Great War honoured a century after their deaths.

Eight Northumberland Fusiliers and one unknown soldier of the Great War buried.

On Wednesday, 17 November 2021, just over 104 years after they paid the ultimate sacrifice serving their country, nine soldiers of the Great War were laid to rest with full military honours. The service was organised by the MOD’s Joint Casualty and Compassionate Centre (JCCC), also known as the “MOD War Detectives” and was held at the Commonwealth War Graves Commission’s (CWGC) Tyne Cot Cemetery near Ypres in Belgium. 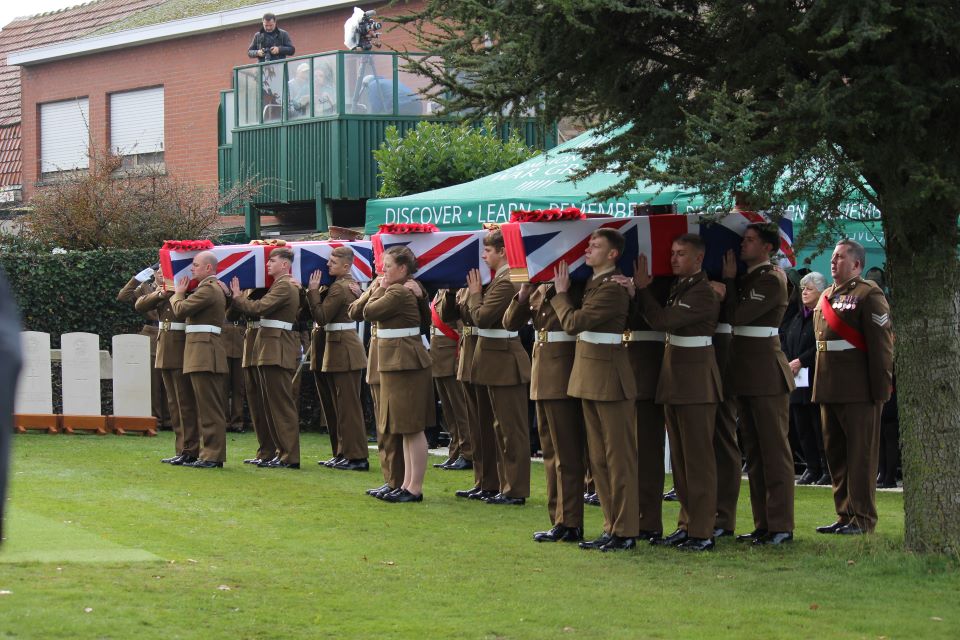 His Royal Highness The Duke of Kent attended the moving service in his capacity as the Colonel-in-Chief of the Royal Regiment of Fusiliers and President of the Commonwealth War Graves Commission.

Through a combination of military research, anthropology and DNA, the MOD War Detectives have successfully managed to identify seven of the nine casualties by name. An eighth casualty, who remains unknown, is believed to have been serving with the same regiment (11th Battalion, Northumberland Fusiliers) whilst the nineth and final casualty is sadly unknown by name or regiment.

“After working on this case for nearly three years, it gives me an immense feeling of pride to see these men finally being laid to rest. It has been wonderful to share this emotional day with so many of the family members, who have travelled as far as Australia to attend.

“The sacrifice these men made will never be forgotten.”

During civil engineering works on Oude Wervikstraat in Beselare, several sets of human remains were found on 8 June 2018. During their recovery by archaeologists from the Flanders Heritage Agency uncovered the remains of a trench, an adjacent bomb pit and a separate bomb pit outside of the trench. The majority of the casualties were located within the trench and appeared to have died at the same time as the result of an explosion, although one was found separately from the rest. 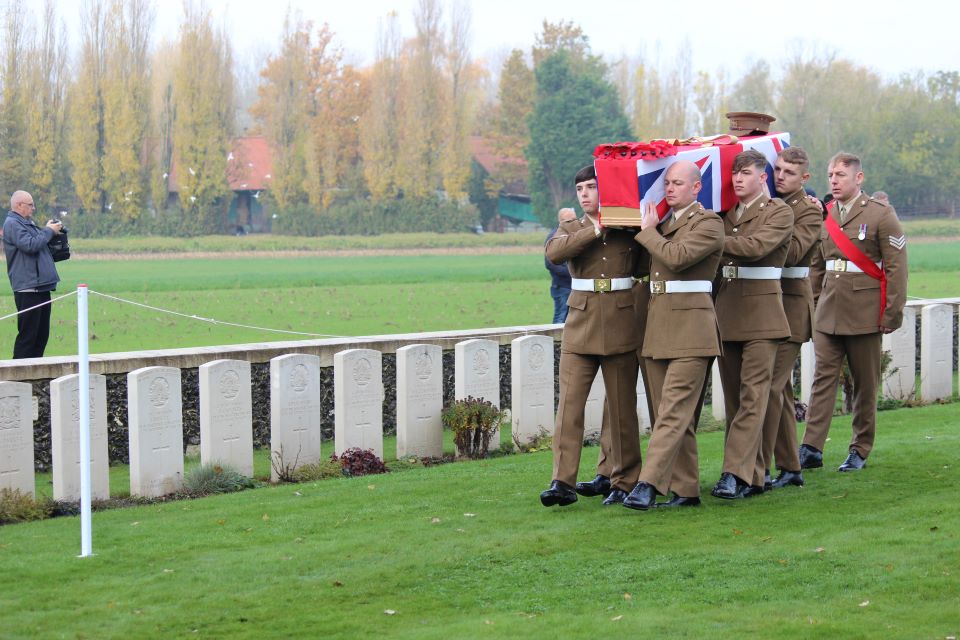 2Lt Ablett is carried to his final resting place.

The following soldiers were positively identified by DNA:

The MOD War Detectives worked tirelessly during the process of identifying the soldiers before dedicating their efforts on tracing possible family members who could then be approached for DNA testing. Where there was a match the team invited those families to attend today’s service, which five sets of family did and paid their respects during the service. 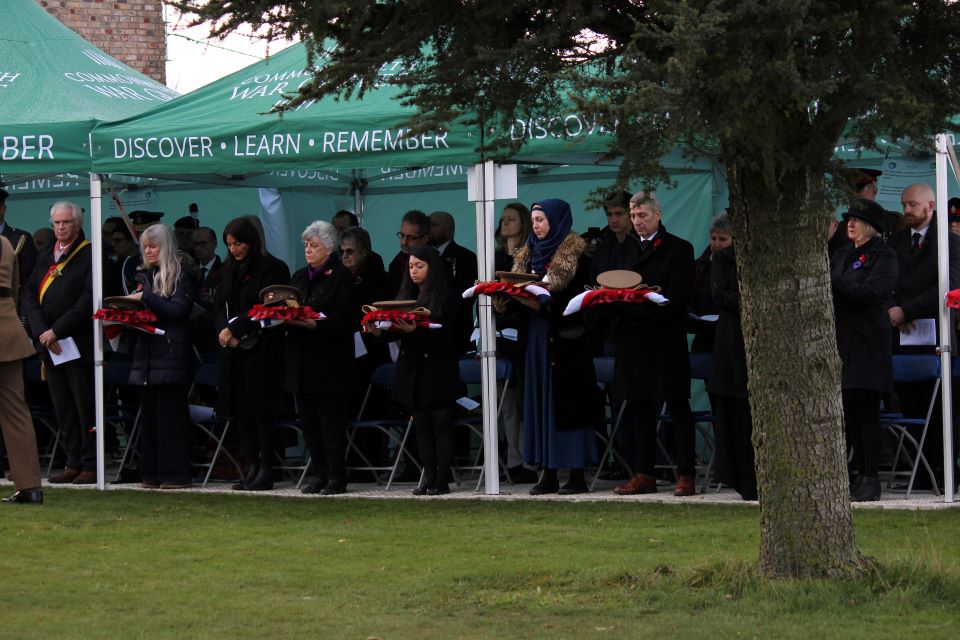 Stephen Willis-Feasby, Sjt Feasby’s great nephew and who provided his DNA in order for the testing to be completed, said:

“It has been an incredible story from the very first letter received to the event that we are here today to honour our relatives. It is a privilege to be involved, so from myself and my family we thank the MOD War Detectives, and all involved for making this a remarkable day.”

“To take part in the right and proper burial of a member of your family is a normal thing, but this whole experience has been anything but normal for us. My sister and I and our wider family never met our dear cousin Leslie in his tragically short lifetime, but 100 years later, he is firmly in our hearts and we’ve been privileged to accompany him on his final journey on behalf of those who loved him in life.

“I’m so grateful to the MOD War Detectives for their dedication in identifying these brave soldiers who fought and died next to each other. It’s awe-inspiring to stand here alongside all these members of the soldiers’ families, as we mourn across the generations.”

Despite returning a negative DNA test result herself, Elizabeth Richards attended the service in honour of the two two unknown soldiers. Elizabeth said:

“It is an incredible privilege to be here today to honour these brave soldiers who, after making the ultimate sacrifice, are finally able to be laid to rest.

“This service was a true testament to the wonderful work conducted by the MOD War Detectives, reuniting families with their long lost loved ones and ensuring a long lasting tribute.”

The service was conducted by the Reverend (Captain) Gary Watt, CF, Chaplain to the First Fusiliers, who said:

“It is an honour and a privilege to preside at the service of these soldiers and officers at such a significant location. Whom with great bravery, and with no thought for their safety sacrificed their lives for the freedom of their country and the world.”

The graves will now be marked by headstones provided by the CWGC, who will care for their final resting place in perpetuity.

“The CWGC is honoured to have worked alongside the JCCC in the recovery and identification of these men and to now be caring for them in perpetuity in Tyne Cot, CWGC’s largest cemetery. The fact that so many of them have been positively identified is testament to the collective dedication that continues to this day, to remember our fallen.”

The Defence Secretary, Ben Wallace, and his Danish counterpart signed a joint declaration today in Copenhagen.

Defence response to the ‘Women in the Armed Forces’ Report

The Ministry of Defence (MOD) response to Parliament’s Defence Sub-Committee’s report into ‘Women in the Armed Forces: From Recruitment to Civilian Life’ has been published.

Protecting Defence and keeping you safe this festive season

The Ministry of Defence Police encourages everyone to help the police tackle terrorism and save lives by reporting suspicious behaviour and activity.

Baroness Goldie yesterday gave the UK statement to the 26th Conference of States Parties of the Organisation for the Prohibition of Chemical Weapons.

A number of changes that will make it easier for people with HIV to pursue a career in the Armed Forces were yesterday announced on World AIDS Day.