Two men from Nottingham have been jailed for a total of five years after being found guilty of posting component parts of an AR15 assault rifle home while on holiday in Florida.

Carlos Sen (26) and half-brother, Stephen Gibson (46), were convicted along with their partners, Rebekah Simons (25) and Louise Caswell (39), of conspiring to import and possess a firearm at Nottingham Crown Court recently (23 October 2019).

The NCA began investigating the importation in June 2017 after Homeland Security agents in the US intercepted a package about to be shipped to Caswell in Retford, Nottingham. It contained the lower receiver, barrel shroud, magazines and stock of the AR15. 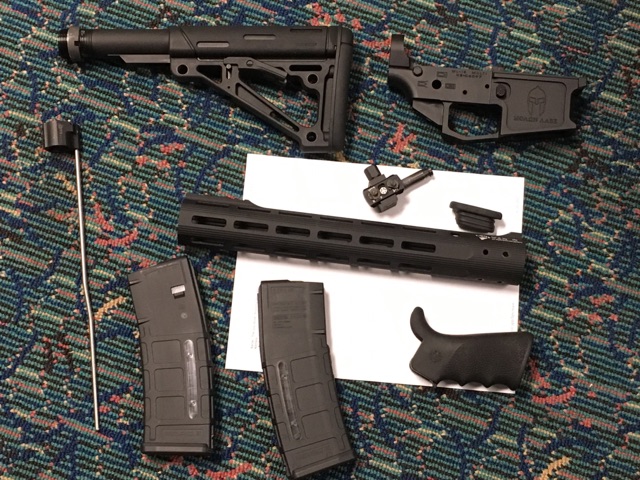 NCA officers, working with Border Force, then intercepted a second package in the UK which contained the barrel of the rifle and was also addressed to Caswell.

The group had attempted to disguise the packages as personal fishing equipment, and included a fishing rod reel along with the barrel.

Investigators discovered that while in Florida, Sen and Simons recruited a US resident to purchase the weapon on their behalf from a legitimate firearms collector. They then worked with Caswell and Gibson to send it back to the UK in parts.

Days after the importation, Caswell and Gibson were arrested by NCA officers at their home on Old London Road in West Drayton. Investigators established they were able to go on the trip, despite being unemployed, as it had been paid for by Sen, Gibson’s half-brother.

Sen, who also had no legitimate source of income but claimed to be a professional gambler, subsequently fled to Italy. He was arrested, along with Simons, a nursery nurse, after returning to the UK.

Prior to his arrest, Sen destroyed his sim card and deleted the contents of his phone. During the trial, he claimed he did so to remove evidence of a one night stand he had in Italy.

In a bid to defend their actions, the group told the jury they had wanted to go shooting on their trip but heard it was expensive. Sen therefore arranged to purchase the firearm, with a US citizen, for around $450 to save them money.

However, enquiries made as part of the investigation showed it costs around $20 to hire a rifle at a shooting range in Florida.

“This group made a foolish and blatant attempt to import a potentially lethal weapon into the country.

“Although gun crime in the UK remains relatively low compared to the US or mainland Europe, we know illegal firearms are used in acts of serious violence and by crime groups to coerce and intimidate.

“Working with international partners in countries where these weapons are legal and supressing their availability in the UK is a priority for the NCA.

“Post and fast parcels remain one of the most popular methods of illegally importing firearms into the UK, and this is also something we, along with Border Force, are actively targeting.”