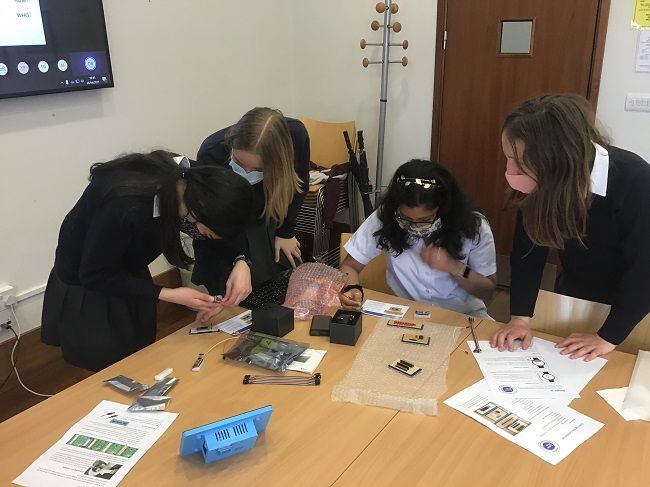 FOUR girls from the London were yesterday crowned UK cyber security champions after triumphing in the final of a nationwide contest for schools.

The winning team from Highgate School successfully saw off competition from thousands of challengers to triumph at the 2021 virtual CyberFirst Girls Competition, run by the National Cyber Security Centre (NCSC), a part of GCHQ.

In this year’s final round – the first to be held online – the ten finalists applied their skills in cryptography, logic and networking to tasks based on a fictional scenario where Internet of Things (IoT) devices including smart kettles and mirrors were infected with malware.

The winning team was announced by NCSC CEO Lindy Cameron and will receive laptops as part of their prize, along with a visit to a prestigious location later in the year.

The final marks the end of this year’s contest, which aims to inspire girls aged 12 and 13 to pursue their interests in technology and consider a career in cyber security – a field where women are still underrepresented in the UK, making up just 16% of the cyber sector workforce.

“Congratulations to all the teams in this year’s final – especially the girls from Highgate School for their winning performance.

“This year’s competition has been another success, and we’re particularly grateful to the teachers who supported their students through the challenges of the past year and industry partners for inspiring girls to explore their passion for technology.

“I’m really excited by the number of girls that have shown real interest and aptitude for cyber security – and this will hopefully mean more women in the cyber workforce of the future with the skills they need to protect the UK from online threats.”

“Well done to everyone who made it to the final and congratulations to the pupils from Highgate School for being crowned champions.

“This year's competition has enabled thousands of girls from across the UK to boost their cyber skills and learn about a career in the industry. Thanks to the hard work of the NCSC, I know it will have inspired a new generation of female cyber defenders who will be protecting people and businesses online in the years to come.”

The CyberFirst Girls Competition opens annually to girls in Year 8 in England and Wales, S2 in Scotland, and Year 9 in Northern Ireland, and since 2017, more than 43,000 girls have taken part.

This year, more than 6,500 girls from more than 600 schools entered as the contest went fully virtual for the first time. The 2021 finalists came from all corners of the UK, with schools from Northern Ireland, Scotland, Wales and five English regions.

The CyberFirst programme offers a range of free opportunities to help school-aged children learn more about cyber security and support their interest in the field.

This includes free courses for boys and girls, which aim to introduce pupils aged 14-17 to the cyber threat landscape and to develop their digital and problem-solving skills. Booking for this year’s summer courses will open on Thursday 29 April.