Demand for rental homes across the UK has reached record levels as almost a quarter of landlords say they plan to sell off homes.

Recently published data gathered by research consultancy BVA/BDRC and publicised by the NRLA shows the extent of the supply crisis across England’s various regions.

The news comes as the BBC reports an increasing number of young renters are signing new contracts worth over 30% of their wages, with the under 30s spening more on rent than any other working-age groups.

NRLA policy director Chris Norris has appeared on BBC radio today and the BBC News channel (pictured below) to talk about the findings, based on statistics from property market consultancy Dataloft.

He said that the country is facing a supply crisis, with rents rising as landlords leave the sector as a result of increasing costs, tax and regulation changes and has called on the next Prime Minister to take action to address this issue or risk dooming the homeownership ambitions of many across the country.

The NRLA is calling for the next administration must adopt the pro-growth tax measures which will help deliver the private rented homes the UK so desperately needs if rents are to be kept at affordable levels.

You can listen to the radio interview again here from 2 hours 5 minutes in. Chris also spoke to GB News about what can be done to tackle the supply crisis in the private rented sector towards the start of the week. 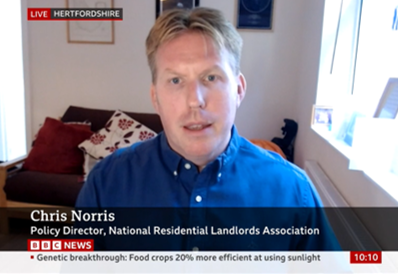 The picture was also bleak in other parts of the UK. 28 per cent of landlords in Yorkshire and the Humber reportedly plan to cut the number of properties they let in the next 12 months. Meanwhile, 78 per cent of landlords saw an increase in demand for rental housing in Q2 2022 (up from 65 per cent at the same time last year).

It was a similar story in South East England, with 21 per cent set to cut properties for rent in 2022/23. Additionally, 74 per cent of landlord respondents stated that they have witnessed an increase in demand for rented housing during Q2 2022.

Commenting on the state of the private rented sector in the South East of England, Marion Money, South East Representative for the NRLA, said:

“Today’s figures show it was a nonsense to think that cutting the supply of rental housing, when demand is strong, would make it easier for those who want to buy their own home. All it is doing is driving up rents, leaving tenants with less cash to save for a deposit.

“We need a strong and vibrant long term private rental market in the South East. This is vital for those who rely on the flexibility it provides, as well as the help it provides to those who need somewhere to live before becoming homeowners. For many in this position, the promise of social housing tomorrow provides cold comfort today.

“Overall, the next administration needs to reset its plans for the sector and demonstrate support for both landlords and tenants across the region.”

The NRLA were contacted to respond to a story announcing that Sadiq Khan has plans to hold an emergency summit, due to the cost of living crisis, and rents rising.

Ben Beadle, Chief Executive of the National Residential Landlords Association yesterday responded to reports in The Times that the Government is considering scrapping plans to end Section 21, ‘no explanation’ repossessions.

The National Residential Landlords Association (NRLA) has announced the start of a new partnership with Carpetright, one of the UK’s leading providers of floor coverings and beds.

The NRLA recently (23 September 2022) responded to research published by Shelter on rent increases in the private rented sector.