Reserves Day 2020: stepping up to protect the UK

Reservists make up approximately one sixth of our Armed Forces personnel and are vital to protecting the nation’s security at home and overseas.

Defence Secretary Ben Wallace thanked the nation’s Reserves for their commitment. He said:

Today is Reserves Day and I personally thank the 35000 reservists supporting our Armed Forces, balancing civilian life with a military career.

Some 2000 stepped up to support the fight against coronavirus recently, displaying commitment, discipline and selfless dedication. An admirable feat and one which highlights the sheer versatility of out Armed Forces.

Reservists from the Royal Navy, British Army and Royal Air Force have shared their stories:

“I am a Civil Servant, completing my final year of the Fast Stream in the Department for International Trade. In my spare time I am also an officer in the Army Reserves serving with 68 (Inns of Court and City Yeomanry) Signal Squadron, 71 (City of London) Yeomanry Signal Regiment based in Central London.”

“During the COVID-19 outbreak, the Army decided to mobilise certain Reserve elements and my Regiment quickly released a call for individuals who were not considered key workers and who would like to volunteer.”

“Following a quick turnaround, I was mobilised at the start of April to command a troop of 27 Reserve soldiers from across my Regiment to support 1 Signal Regiments efforts in the West Midlands area. This experience required me to adapt my leadership approach to the challenge of bringing together individuals from different squadrons, to get to know each other and organise ourselves all via virtual platforms.”

“It has been phenomenal to see the determination and spirit of people coming together from across society and all walks of life to help the most vulnerable, those affected by the virus and their families.” SLT Ewing on the deck of HMS Queen Elizabeth

“I joined the Royal Naval Reserve in my first year at the University of St Andrews, having previously been a member of the RAF Air Cadets. The RNR was a fantastic way to do something different while studying at university. It gave me the opportunity to travel, train, stay fit, acquire valuable skills and earn money all in one go. I am extremely proud to serve in the Royal Navy part-time.”

“I am currently mobilised as a submarine advisory team (SAT) watchkeeper aboard HMS Queen Elizabeth. My main role is to facilitate the safe and effective operation of a submarine in support of the UK Carrier Strike Group (UKCSG).”

“For me the best thing about the Reserves is the range of diverse opportunities on offer. In my short career I have supported national exercises involving submarines, delivered training to new recruits, travelled to France, Gibraltar and Belgium and been mobilised in support of the UK Carrier Strike Group. I have also developed my leadership and management skills and am now responsible for the delivery of initial naval training at HMS Scotia.”

“I became an officer at the age of 18, and I think one of the biggest challenges for me was proving that — despite my age — I could be an effective leader and team player. I would encourage anyone interested in joining the Reserves to kick-start their application and get involved. The more you put in, the more you get out.” 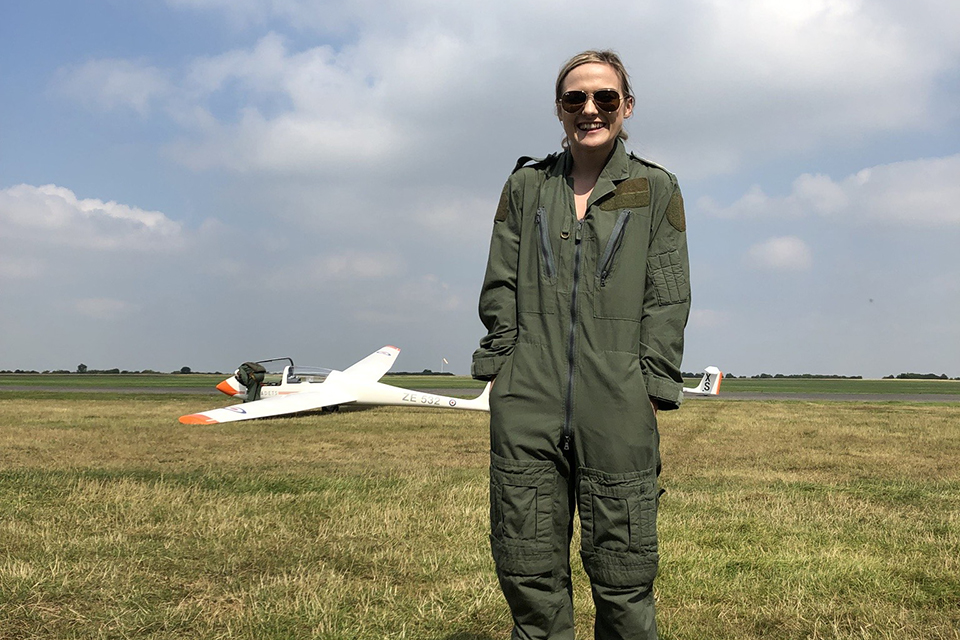 Polly enjoys the "cool factor" of activities like flying gliders

“Prior to joining the Reserves, I wouldn’t even give eye contact to anyone. I am now, however, far more confident and eager to learn. The Reserves pushes you in various elements such as leadership, confidence and organisational skill, and this in turn can help enhance you in your everyday life.”

“There is also the ‘cool’ factor! Coming from a somewhat ‘nerdy’ childhood, the ability to say I have shot a rifle, flown a glider, camped out in the woods, socialised with Canadian Soldiers in France, Nordic-skied up a mountain larger than Ben Nevis, certainly piques the interest of those I talk to!”

“I am very proud to be part of an organisation that I believe is truly a force for good in the world. I also enjoy the camaraderie within our Squadron — Reserves are a mix of many individuals from different backgrounds.”

Simon Chapman is a Chaplain at a UK boarding school by day, a Chaplain with the Royal Navy in his spare time and is now mobilised with the coronavirus effort.

Working with servicemen and women in the Royal Navy brings different challenges to working in a school.

“My skill as a vicar has been greatly enhanced by the training and experience that I have received in the Armed Forces.”

“The great part about being a member of the Royal Navy is that I never feel that I am on my own. When I encounter a situation with an individual that is complex, I can immediately call on the assistance of medical staff, mental health professionals, welfare support workers and the individual’s chain of command.”

Simon has had a diverse career: he acted as a Chaplain in Afghanistan during Herrick, where he held a weekly Church of England service, ran the Easter services, and vigils and repatriation services in times of tragedy. Being able to travel with the troops in Afghanistan and assist in a range of roles, has been the marker of a career that is never the same two days in a row. 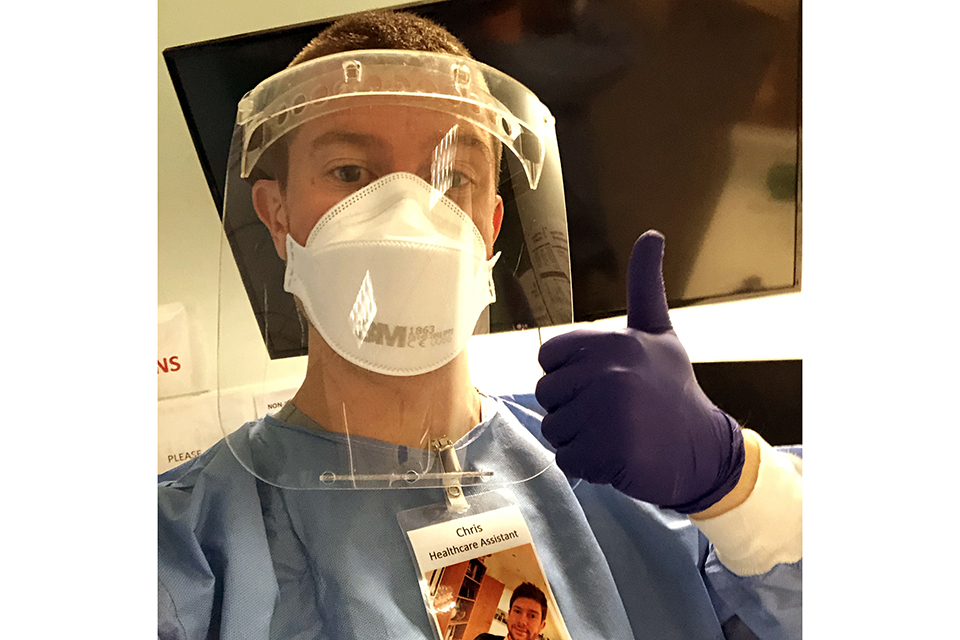 Hon. Midshipman Christopher Storer is a Royal Navy medical bursar studying medicine at Brighton & Sussex Medical School. Since teaching stopped due to lockdown, he has been working as a Healthcare Assistant (HCA) in A&E in the Royal Sussex County Hospital.

“I’d just completed my second-year presentation in March, when we received the email telling us that the COVID-19 outbreak had been declared a pandemic, and that teaching was suspended immediately. I’d already been working at the Royal Sussex County Hospital for almost a year at that point and so as lockdown was announced I was able to immediately book in to work the next day.”

“In A&E, like the rest of the hospital, the facilities had been split into “red” and “green” zones — with red being the areas where Covid-positive patients were receiving treatment, and the green zones being protected areas which would be kept Covid-free.”

“By the end of March, the effects of lockdown had made the hospital significantly quieter. There was a constant sense that a tidal wave could hit at any moment. Nothing was left to chance, and staff were taking full advantage of the initial quiet to prepare. Extra training was provided to refresh skills, and within a couple of weeks I was able to work in the patient ambulatory triage, assisting the nurses by putting cannulas in, taking bloods and other tasks. It was a high-pressure, fast-moving environment but I felt incredibly well supported by the emergency department staff.” “In April, with a good amount of experience working at the front of A&E, I began working in the red zone. Areas were set up to put on the full PPE: a surgical gown, the tight-fitting masks, a visor and scrub caps. I remember feeling anxious the night before my first red zone shift– the name conjures up images of red lights and closed off wards, looking like something on a submarine from an old war movie. But the reality was nothing of the sort. While access in and out was highly restricted to prevent the spread of the virus, it was a normal hospital environment.”

“It was hard work, but there were so many morale-boosting moments working on the emergency department team. The local community really come together to support the NHS. We’d receive donated scrubs and knitted ear protectors to help with the sore marks you get from wearing the surgical masks daily. At the Easter weekend, we received over 200 donated Easter eggs. It seems like such a small thing, but to the staff working there it means so much.”

“Looking back, I feel incredibly privileged to have worked as part of the A&E nursing team providing frontline care to patients. I’m glad to have been able to play a small part in helping during the COVID-19 outbreak.”

A new helpline providing support for service personnel experiencing or witnessing bullying, harassment or discrimination has been set up by the Ministry of Defence to clamp down on instances of unacceptable behaviour in the armed forces

​The Armed Forces led the nation in saying farewell to the Forces’ Sweetheart with a series of ceremonial tributes at the funeral of Dame Vera Lynn recently.

​The Armed Forces led the nation in saying farewell to the Forces’ Sweetheart with a series of ceremonial tributes at the funeral of Dame Vera Lynn recently.

A section of Cowden Sands beach has been closed to protect the public from the risk of unexploded ordnance.

Permanent protection from higher tax for military personnel in Scotland

Thousands of British Armed Forces personnel will continue to be protected from income tax rises passed by Holyrood.

Estonian Special Forces deploying to Mali will be loaned four Jackal armoured vehicles by the UK Ministry of Defence, it is today announced.

The Defence and Security Accelerator (DASA) wants to understand the current market capability and development requirements of mobile surgical facilities.

The children of service personnel will be entitled to free breakfast and after-school childcare as part of new measures to better support the armed forces and their loved ones.

Ministry of Defence confirms the death of Fusilier Sam Brownridge

It is with great sadness that the Ministry of Defence must announce the death of Fusilier Sam Brownridge.