Restoring Estuarine and Coastal Habitats in the North East Atlantic

At the Environment Agency’s recent flood and coast conference, I shared a platform with the writer and broadcaster Nicholas Crane, who you probably know from the television programme: “Coast”.

Britain has only been occupied for 12,000 years… It’s all happened so quickly - we’ve gone from nobody being here at all in 9,500BC to 64 million of us being here today.

Personally speaking, 12,000 years seems like quite a long time.

But, when experts put our present challenges in such a grand historical context I think it’s worth listening.

The Holocene has ended. The Garden of Eden is no more. We have changed the world so much that scientists say we are in a new geological age: the Anthropocene, the age of humans.

Last year, the Intergovernmental Panel on Climate Change said we have 12 years to hold global warming to 1.5°C above pre-industrial levels… and even if we do, the impacts of climate change - like floods, heatwaves, storms, drought, and sea-level rise – will increase.

As the Extinction Rebellion activists remind us again this week, we need to act, but last week, the Committee on Climate Change made clear:

The estuarine and coastal environment of the UK…(Where over a third of people live)…has changed substantially from its natural state.

Even without human intervention, the coastline has never stayed in the same place, but climate change is increasing and accelerating these processes.

England has also lost about 85 per cent of its historic saltmarsh.

We have gone from over two hundred thousand hectares to around thirty four thousand.

Some areas which have experienced 100 per cent loss of saltmarsh have not recovered in any way.

It is estimated that more than 90 per cent of our native oyster biogenic reefs have been lost.

More than 50 per cent of our water bodies no longer have seagrass where it once grew. 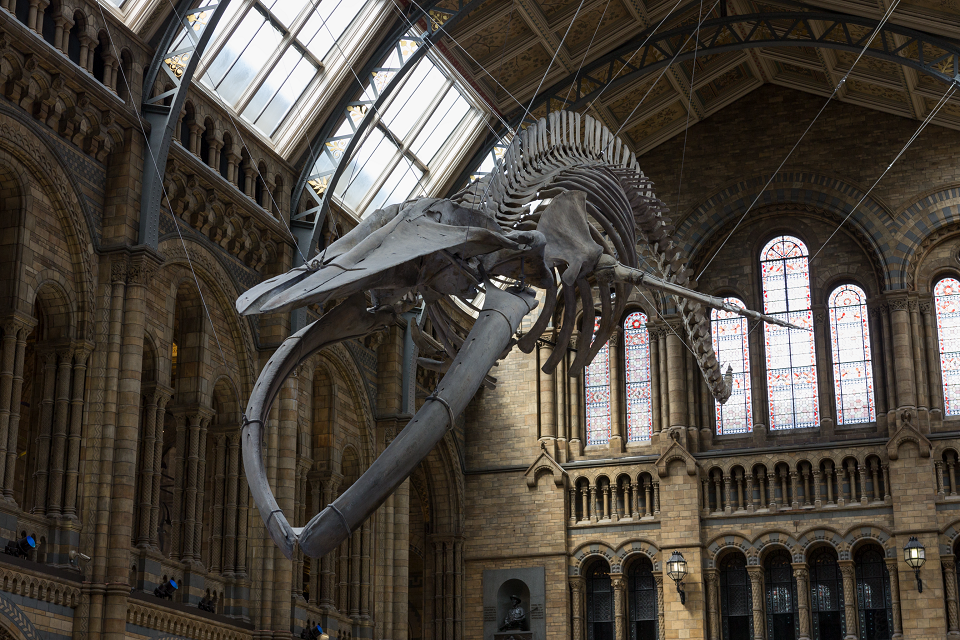 But, I don’t think we should despair.

Human beings are agile and can adapt.

The blue whale hanging from the ceiling, here in the Natural History Museum, reminds us of that.

That year, in London, the decision was taken to legally protect blue whales.

This conference is about changing the story like that for the UK’s coastal habitats.

Our near-shore seas and estuaries in the North East Atlantic have been transformed by human activity with significant losses of key habitats and the services they once provided.

We can reverse some of these changes and restore habitats.

This creates the space for everyone in this room to raise their ambition higher… together.

So how should we act?

While we continue to play a leading role in international efforts to keep global temperature rises well below 2°C… our resilience will only be robust if we prepare for worse climate change scenarios.

The Environment Agency, is a regulator, advisor and operator out to three nautical miles.

We need to protect people and businesses on the coast through flood protection schemes.

Earlier this year, we released a draft Flood and Coastal Erosion Risk Management Strategy to 2100.

We said: We can’t win a war against water by building away climate change with infinitely high flood defences.

We need to be more resilient.

We need to help communities better understand their risk and give them more control about how to adapt and respond.

And, we need to look at more nature based solutions.

We will be working closely with government and partners to finalise our Strategy later this year.

As the Committee on Climate Change reported last week, society urgently needs to invest in Nature based Solutions such as afforestation, peatlands, and saltmarsh to draw down carbon and ensure that we can adapt to the impacts of a changing world.

Today, we want to establish a network for restoration of estuarine and coastal habitats and species.

This has – remarkably - never been done before…

Certainly not across government bodies, industry, NGOs and academia.

We want you to share your knowledge and experience.

We hope to take stock of what we have lost, what projects are underway, and look to the future to see what more we can do collectively.

Afterwards we hope to develop a much larger programme of restoration.

My colleague Pete Fox will be elaborating on the opportunities for partnership in a moment.

No one organisation can do this alone.

Green Finance has a significant role to play.

In the recent Green Finance strategy, the government increased the expectation for financial institutions - and regulators - to consider the impacts of climate change within their investments.

The strategy says the government will work with international partners to catalyse market-led action to enhance nature-related financial disclosures.

This will complement the global review of the economics of biodiversity by Professor Sir Partha Dasgupta.

And, it will mirror the success of the Task Force on Climate-related Financial Disclosures’ approach by supporting the private sector to develop consistent disclosures to better manage nature-related financial risks.

This is important, but we also need a large scale redistribution of capital towards the types of green assets that I hope you will discuss today.

But, we’re not just talking about “green” initiatives – this work is in everybody’s financial best interests.

The marine environment has a tremendous ability to recover.

I hope that today’s conference helps to move the discussion about coastal habitats on from protection - to restoration.

We want to achieve greater resilience for people and wildlife at the coast: restoring, enhancing, and protecting the benefits we receive.

All of us benefit from the coast – particularly in a country where it is never more than 84 miles away.

Thank you very much.

A trash screen used to collect debris and reduce the risk of flooding to Sheffield city centre is getting a major upgrade by the Environment Agency.

Regulating the waste industry during the coronavirus pandemic

The Environment Agency is continuing to protect people and the environment during coronavirus (COVID-19).

Workers will follow the government's coronavirus guidance while undertaking the project, which reduces the risk of flooding to homes and businesses.

Work to reduce flood risk that will allow regeneration in Stoke town centre has the green light after the Environment Agency and Stoke-on-Trent Council secured funds.

Helping to tackle lockdown waste crimes in the North East

The Environment Agency is working hard with the government and other partners to protect the public and environment from the effects of coronavirus (COVID-19).

Work to overhaul Keadby pumping station near Scunthorpe has taken a significant step forward thanks to the arrival on site of the first 2 of 6 new pumps.

You can now fish on your own, with your household, or with one other person while adhering to social distancing rules and staying two metres apart at all times.