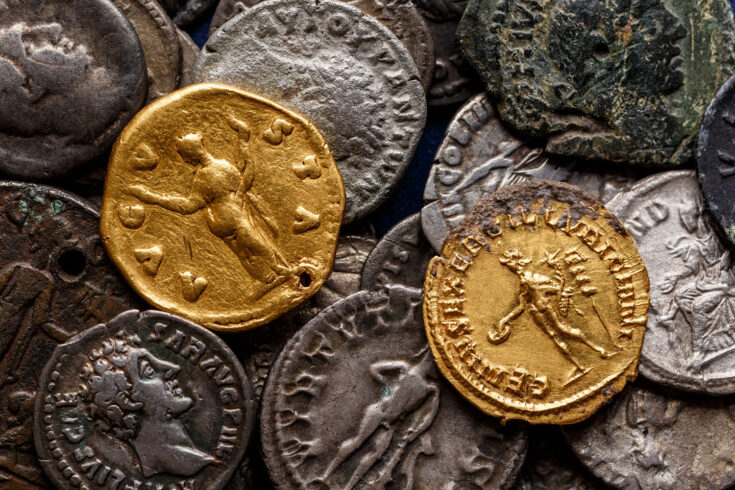 To reach this conclusion, researchers brought three Roman coins to the Science and Technology Facilities Council’s ISIS Neutron and Muon Source for analysis.

Looking into the past

When high-value artefacts need to be analysed researchers are generally required to employ non-destructive techniques.

Researchers from the University of Oxford and the University of Warwick brought three Roman coins to the ISIS facility. The team wanted to see if the coins had been surface enriched, or secretly mixed with other metals.

By doing this, the researchers could deduce a number of things about the society they came from, including the level of economic stability.

The coins analysed were issued during the reigns of three different Roman emperors:

To measure the purity of the gold coins they used muonic X-ray emission spectroscopy, a totally non-destructive analytical process that involves firing negative muons at the artefact.

The muons are then captured by the atoms within the coins, which then emit a ‘fingerprint’ of muonic X-rays that are unique to the chemical element they came from.

The ‘core’ of the coin

The results from the surface level analyses of these coins suggested that they were very high purity gold. However, these measurements were from the first few fractions of millimetres of the coins, so there was a very reasonable ‘what if.’ ‘What if they’re actually made of something different beneath the surface?’

We know that the Romans deliberately surface enriched their silver coins to ‘hide’ the fact there was a lot of copper in them, so it is plausible something similar happened to the gold.

Our work at ISIS enabled us to sample the very centre of these coins totally non-destructively and conclusively show that the high purity seen on the surface was representative of the composition of the ‘core’ of the coin.

At a basic level it is further testament to the economic health of the Roman Empire, but these conclusions are also useful for researchers who need to employ non or negligibly-destructive techniques on the surfaces of Roman gold coins.

Now they can be confident the surface is representative of the bulk of these objects.

Using this technique allows scientists to probe deeper into the elemental make-up of artefacts than is possible with other methods, while being entirely non-destructive.

Muonic X-ray emission spectroscopy also does not require the object to be cleaned before analysis, reducing the workload placed on cultural heritage institutions.

Cleaning some artefacts can actually lead them to become damaged. This technique is therefore particularly useful for analysing objects still covered in a layer of mud or soil, such as those salvaged from shipwrecks.

These results highlight the potential of this technique within the field of cultural heritage. It is a non-destructive technique that can sample deep beneath the surface of archaeological objects.

It requires no sample preparation and does not leave the artefact radioactive, making it a perfect tool for those working on museum collections.

Beyond working out the sub-surface purity of an object it could: determine the depth of any corrosion on an object, identify chemical changes within the artefact caused by unique manufacturing processes, or reveal that an object we thought was made of one thing is actually a forgery made of another, all without causing any damage.

More about the technique

The RIKEN-RAL (Rutherford Appleton Laboratory) muon beamlines at the ISIS Neutron and Muon Source was used in order for the negative muons to penetrate deep into the artefact being studied. When captured by an atom they emitted X-rays.

The muons are created by bombarding a carbon target with high energy protons, this causes the creation of pions which are extracted and then decay into muons.

These muons have a range of different momenta. The muons with lower momentum are used to analyse the surface of the artefact and the high momentum muons pass deeper into the artefact obtaining data from its core.

Find out more about the RIKEN-RAL on ISIS Neutron and Muon Source.

The James Webb Space Telescope (Webb) has reached its final destination where it will orbit about a million miles from Earth and observe the universe.