Ofsted data on school inspections shows that the overall grade profile for schools has improved compared to the period before the pandemic.

Ofsted has published data on school inspections carried out since the start of term, which shows that the overall grade profile for schools has improved in comparison with the period prior to the pandemic.

For the first time since the government lifted the exemption on inspecting outstanding schools, this data includes the new grades for those schools visited this term. Ofsted is currently inspecting previously exempt schools that have gone the longest without an inspection – over half of those inspected this term had not been inspected for over 10 years – so it isn’t surprising that many have not retained the top grade.

At the end of November, 87% of all schools in England were rated either good or outstanding. This is similar to the 86% reported in August 2019, prior to the EIF being introduced and before the pandemic began.

I am fully aware that schools are still facing very significant challenges as a result of the pandemic. So, I’m very pleased to report that schools are improving and being recognised for doing so. In fact, inspection results this term are very much in line with what we saw before the pandemic began, if not slightly improved. That will be a reassurance to parents and to schools as well.

Our inspections are intended to be constructive and supportive, so I’m pleased that our survey results show they are valued by the vast majority of school leaders who have experienced one this term. But inspections are also incredibly important for children, who only get one chance at education and have already lost so much in the last 20 months.

No two years of inspection outcomes are ever completely alike, because the mix of schools inspected varies each year, but grouping schools by their previous inspection grade makes the data more comparable. The chart below shows the new grade profile for all schools inspected this term, grouped together by their previous grade, alongside the grade profile for schools inspected between September 2019 and March 2020. For example, of schools previously rated RI, it shows that 72% were judged good this term, 27% remained RI and 1% dropped to inadequate. 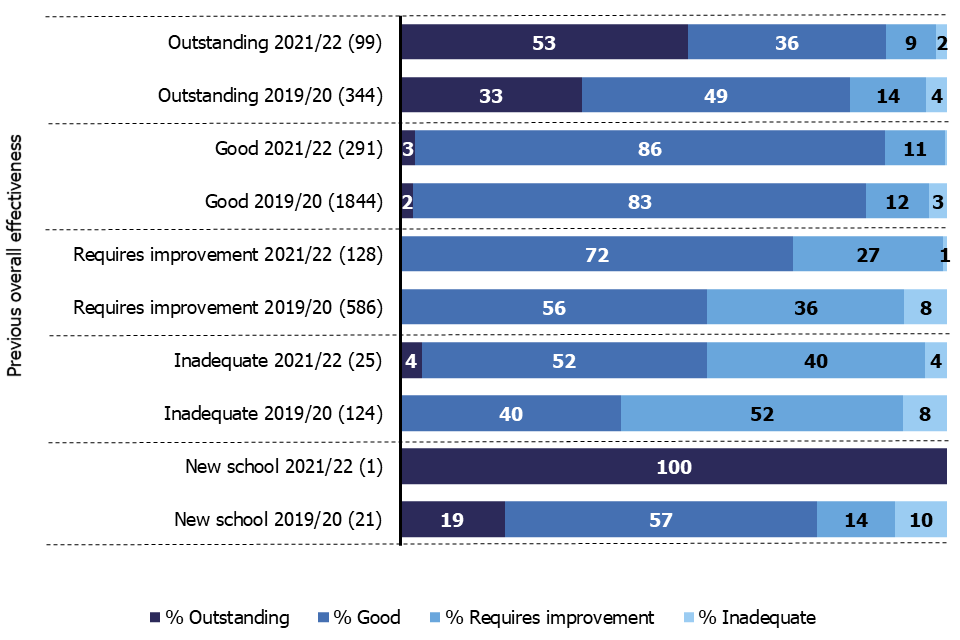 Latest News from
Office for Standards in Education (Ofsted)

Ofsted has published the latest in a series of reviews into different subjects across the curriculum. This review looks at computing.

Amanda Spielman's speech at the 2022 Schools and Academies Show

Every child deserves the best start in life

‘Lack of collective knowledge’ on needs of children in care

There is a ‘lack of collective knowledge’ around the needs of children in care, according to a study by Ofsted, published today.

Strong signs of recovery across education, but challenges remain

Ofsted yesterday published the second set of reports in a series looking at the pandemic’s continued impact on education providers.

Failing to teach prisoners to read is 'huge missed opportunity'

Failing to teach prisoners to read leaves up to half unable to access vital rehabilitative education while in prison, according to new research by Ofsted and HMI Prisons.

Ofsted's Chief Inspector yesterday discussed the impact of the pandemic on apprenticeships and the elements that make for good apprenticeship training.