Scientists from the Defence Science and Technology Laboratory (Dstl) have been working with soldiers, aircrew and industry partners on Salisbury Plain in Wiltshire in a unique experiment to see how humans and a new generation of smart machines can partner to change the way that military operations are conducted.

During a two week exercise at Copehill Down Village, soldiers and aircrew combined their core platforms with uncrewed aerial vehicles (UAVs) and autonomous ground vehicles (UGVs) developed by industry partners to look at the challenges and opportunities provided by technology that could help the Army improve military advantage. Helicopter pilots controlled UAVs from the cockpit, providing ground troops and vehicles with improved situational awareness. Tank commanders and dismounted troops used UGVs and UAVs to enhance their ability to find targets in complex urban environments.

Technically it’s a big game of hide and seek. We can get ‘hands on’ with the drones, get ‘hands on’ with the ground vehicles and find the people you need to find. It will absolutely make a difference, there are parts where you can’t go, especially for your dismounts. So instead of using ground troops, you can push the UGVs out or other vehicles out and get them to do your job for you instead.

The MOD is investigating how to reduce the collective burden of war fighting tasks on soldiers by exploiting software and autonomous vehicles to carry out tasks such as combat support and intelligence, surveillance, and reconnaissance (ISR) missions.

The trial falls under the Army Warfighting Experiment, a project that has been running for the last 10 years and gives personnel the opportunity to test a whole range of futuristic technology. Dstl’s scientific expertise identifies and carries out initial testing on viable industry proposals to deliver technology that shows the greatest potential to the end user and deliver clear military and strategic advantage to the UK. 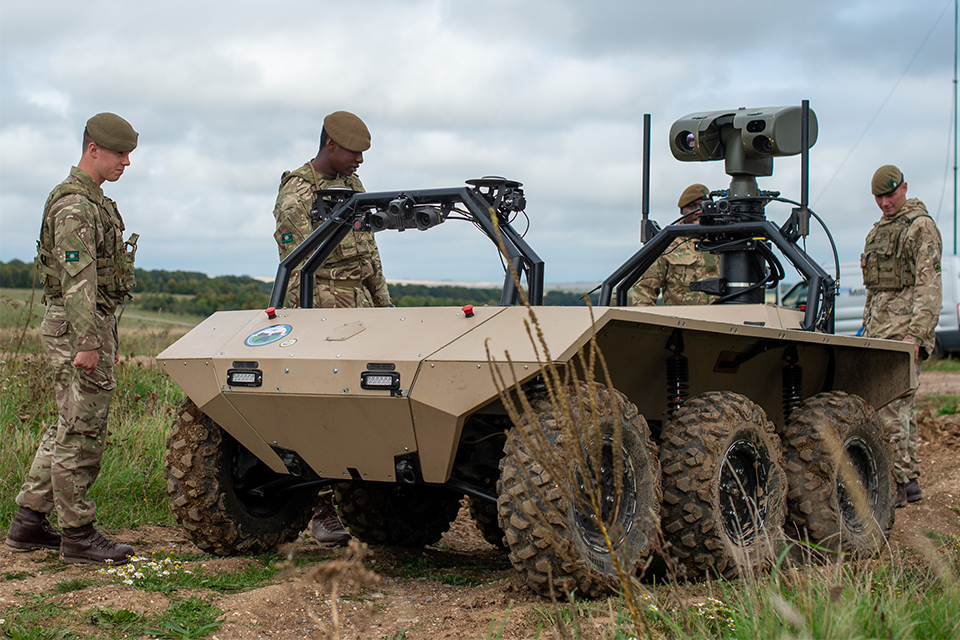 These types of experiments are really important for the future, if we’re going to keep pushing forward and understanding autonomous technologies and behaviours, we need to have these experiments where we can be right at the beginning of the science and get soldiers’ inputs straight away into the development of the systems.

This has been a hugely demanding activity to pull together, particular during the Covid-19 pandemic with significant hurdles to overcome to deliver a trial of this complexity. It has been a privilege to work alongside Army colleagues to understand their challenges and help shape the development of industry delivered solutions that could address those challenges.

The industry partners were selected through a competition enabled by the Defence and Security Accelerator (DASA) to look for innovative solutions to crewed and uncrewed teaming. Industry was asked to demonstrate some or all of the following:

Industry teams were given 12 months to develop and deliver novel semi-autonomous uncrewed systems capable of being operated on the move in current Army platforms in a representative military environment.

Baleen 3 is a tool co-developed by Dstl for building data processing pipelines and offers users the ability to search, process and collate data.

Funding available to develop capabilities to operate in hazardous environments without physically being present.

In recognition of his outstanding contribution to the profession, Dstl’s Dr Bryn Hughes has been elected as a Fellow of the Royal Academy of Engineering.

In a recorded message, Amanda Solloway recently (14 September 2020) spoke about the promoting a culture of wellbeing for researchers and improving the way we evaluate research.

The Commissioner of the Metropolitan Police, Dame Cressida Dick, has visited the Defence Science and Technology Laboratory to see the latest innovations being trialled in support of the police and judicial system.