A Sellafield decommissioning success has changed the Cumbrian skyline forever.

Nuclear clean-up teams have removed the huge diffuser at the top of the Windscale Pile Chimney on the Sellafield site.

The diffuser gave the 125-metre chimney its distinctive top-heavy appearance.

It has loomed over the west Cumbrian landscape for nearly 70 years.

But after 3 years of careful dismantling, it has now been cleared.

The achievement has also removed the seismic risk associated with the chimney. 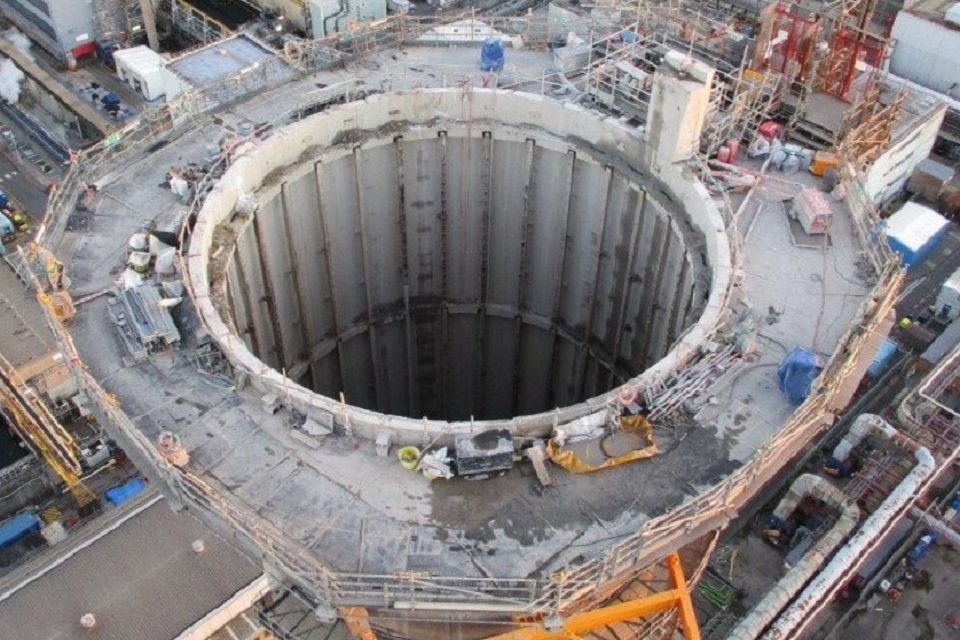 A birds- eye view of the chimney, with its diffuser removed.

I’m delighted to have reached this point. Removing the seismic risk is a huge achievement.

This is a clear demonstration of progress towards our purpose of delivering a clean and safe environment for future generations. Many people have contributed to this success.

Sellafield Ltd employees have worked closely with their colleagues from our partners ADAPT, Doosan, Mammoet, KDC, Kaefer, the Design Services Alliance, and Nuvia.

The work was hugely challenging and much of it took place during the COVID-19 pandemic.

The diffuser had to be cut up in-situ, more than 100 metres above ground.

Sections were then transported separately down to the ground. It required 200 moves to clear the entire block.

Work is now taking place to remove a metal frame platform and reduce the access shaft. Once that work is complete, a key delivery milestone will be met.

Following this, work will start on demolishing the chimney barrel.

The removal of the diffuser and the progress made on the demolition work marks an important achievement for the Nuclear Decommissioning Authority’s (NDA) mission to clean-up the UK’s earliest nuclear sites on behalf of the UK government.

This is an excellent example of the pioneering work taking place on our sites to deal with the legacy of the earliest days of the nuclear industry. In reaching this significant milestone of removing the Windscale Pile Chimney diffuser, we take another step forward in our clean-up mission.

This is a great achievement. Well done to the whole team who have worked tirelessly to deliver this iconic, visible and, crucial piece of remediation work.

The demolition was delivered by a team of 54, including 39 from ADAPT and their subcontractors and 15 people from Sellafield Ltd.

Waste management of the blocks

The sections of the diffuser structure have been cut by machine using diamond wire saws. These cut blocks were removed from the top of the stack and lowered into the controlled area canopies ground using the tower crane.

The blocks were then remediated and transferred to the bagging station on the Sellafield site where a Goliath crane was used to manoeuvre the blocks ready for transport to interim storage prior to disposal.

This was either to the Calder Landfill Extension Segregated Area on the Sellafield site, or Low Level Waste Repository, dependent on contamination levels and conditions for acceptance at each location.

The team also introduced a fit for purpose facility to diamond wire cut the face of some of the removed contaminated blocks to ensure we manage the blocks in accordance with the waste disposal hierarchy.

The first batch of waste has been safely removed from one of the most hazardous buildings on the Sellafield site, the Magnox Swarf Storage Silo.

A new initiative takes volunteering to a new level

This is Me in the nuclear industry 2022

Employees from across the NDA group have shared their personal stories as part of a national campaign to end the stigma associated with mental health issues.

Will you be an ally?

Making the move: Project professional Neal on why Sellafield was the right choice for his career