Ahead of the G7 leaders’ summit in Cornwall, the IPPR think tank is urging the UK to spearhead efforts to rewrite the rules of global trade.

Beyond promoting equitable growth, this new trade agenda should involve wider policy objectives on areas such as tackling the climate and nature crises, strengthening employment standards and promoting democracy and human rights.

In a new report analysing the state of international trade, the think tank says that since the end of the Trump presidency, there is now significant scope for improved global trade diplomacy and an opportunity for the US and UK to work closely together.

IPPR argues that the UK would have a strong ally in forging this new approach to trade in President Joe Biden. This agenda would strengthen the ‘special relationship’ and boost the chances of a new post-Brexit trade deal, according to the report.

IPPR also warns that without building international agreement on this new green trade agenda, there are risks of carbon leakage - where energy-intensive industries in countries with stricter climate policies decide to relocate to countries where rules are looser.

New analysis reveals that the UK’s net carbon dioxide imports are the highest in the G7 per head at 2.4 tonnes per capita, making this an issue the British government must urgently address. IPPR says carbon imports must be part of countries’ net zero emissions targets.

At the G7 and COP26 summits IPPR urges the UK and US to work together to:

The report concludes that establishing this new positive model of international trade is also vital for restoring trust and addressing concerns that the existing model of global trade has contributed to a series of social, economic, and environmental harms. This year’s G7 and COP26 summits in the UK are critical for resetting the global trade agenda.

“With a new administration in the US and the beginnings of an independent trade policy in the UK, now is the time to revitalise the ‘special relationship’ with a joint trade agenda to promote climate action, tackle inequality, and safeguard human rights.

“As the UK hosts the G7 and COP26 summits this year, there is a window of opportunity for the government to take on a global leadership role. The UK should make the most of this by working with the US and other trade partners to spearhead efforts to rewrite the rules of global trade. Taking this opportunity could help liberalise trade in environmental goods, address the risks of carbon leakage, and pave the way for an environmentally ambitious trade deal with the US.”

The IPPR paper, Towards A Progressive US-UK Trade Partnership by Marley Morris and Shreya Nanda, is available for download at: http://www.ippr.org/research/publications/towards-a-progressive-us-uk-trade-partnership 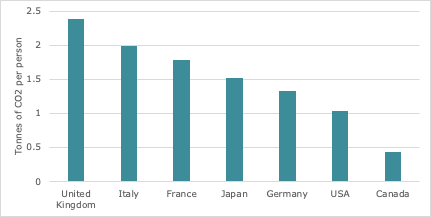 This briefing is the first output of a 12-month IPPR project on US-UK trade and sketches out a starting point for a US-UK relationship which embeds shared climate, nature and social ambitions. In the following stages of the project, we will focus on developing our framework for a progressive US-UK trading partnership in greater depth.

Aberdeenshire residents, from city and shire, want to use existing skills and natural assets to turn ‘the oil capital of Europe’ into a green energy and manufacturing hub

While a lot of the focus on the employment effects of the pandemic has, rightly, been on the young, employees over the age of 65 were 40% more likely to be furloughed in late April than those in their 40s (14% versus 10%).

Julian Jessop, Economics Fellow at free market think tank the Institute of Economic Affairs, responded to consumer price inflation figures published by the Office for National Statistics, which show inflation has jumped to 2.1 per cent

Government targets in public services may do more harm than good, warns a new paper from the Institute for Government.

Delay to roadmap could lead to “a further rash of business closures”: IEA expert comments on ONS labour market figures

Professor Len Shackleton, Editorial and Research Fellow at free market think tank the Institute of Economic Affairs, commented on the labour market figures from the Office of National Statistics showing the unemployment rate has fallen to 4.7 per cent

In a new report, researchers have set out to investigate the scale of support for ultra-progressive radical activist agendas alleging ‘systemic racism’ in English society, the understanding and use of ‘unconscious biases’ and prescribing a ‘climate emergency’ doctrine within the Church of England.

Christopher Snowdon, Head of Lifestyle Economics at free market think tank the Institute of Economic Affairs, responded to figures from the Office for National Statistics showing that 55 per cent of pub staff are still furloughed and only 24 per cent of pub owners have “high confidence” that their business will survive the next three months