To mark the 10th anniversary of The Nimrod Review, the MAA hosted a conference to assess advancements in air safety and the future challenges that lie ahead.

On the 28th October 2009 Sir Charles Haddon-Cave published The Nimrod Review. His report into the 2006 accident over Afghanistan, which claimed the lives of 14 service personnel, was a wake-up call to the MOD. His summary, that the accident was due to ‘a failure of leadership, culture and priorities’ within the department, was a hard-hitting message that has led to fundamental changes in the way the MOD manages air safety.

To mark the 10th anniversary of the review’s publication the Military Aviation Authority (MAA) organised a conference for those involved in Defence flying activities. The purpose of the event was to consider how the MOD has progressed since the review and to consider where focus is likely to be required in the next ten years. In attendance were senior leaders from the Royal Navy, Army, and Royal Air Force, as well as industry partners and non-military speakers from academia and commercial backgrounds.

Session 1 – How has Defence done in the past decade?

In the opening session, speakers from the military front line, the MAA and Defence Equipment and Support (DE&S) were joined by EasyJet to discuss the changes in air safety management over the past ten years. The military speakers recognised the benefits that had been gained from both the introduction of the duty holder system (see note below) and the establishment of the MAA. These two measures, which were key recommendations of Haddon-Cave’s review, have increased personal accountability and independent assurance. The Director MAA identified that his organisation was maturing from one focussed on calendar-based audit to one employing a risk-based approach, enabling a mentoring and guiding relationship to be developed with the Regulated Community. The lessons from the commercial sector reflected those of the military, with a key tenet being the need to ensure integration across the organisation with clearly defined lines of communication.

However, while progress to date was rightly celebrated, it was acknowledged that much remained to be done: further development of the links and understanding between aircrew and engineers is required; cross-domain relationships such as ship-air and land-air need more work; and, there is more that can be done to improve the safety culture, particularly in areas that do not always see a direct connection with flying activity. The Nimrod review’s principles of leadership, independence, people and simplicity remain as pertinent now as the day it was originally published ten years ago.

The MAA was delighted that Sir Charles Haddon-Cave agreed to address the conference to give his view on progress since the publication of the review and provide a personal reflection on the intervening ten years. Sir Charles was emphatic that the principles he identified in the report have stood the test of time and still hold true today. He also emphasised that the lessons of the Nimrod review have relevance across all domains and not just aviation. 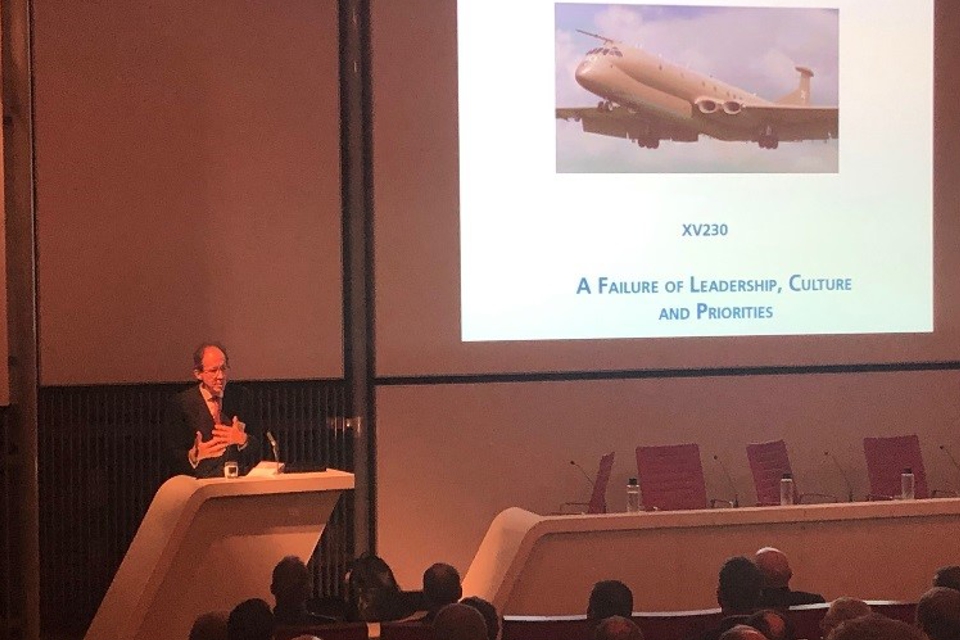 Sessions 2 and 3 – What will be the new challenges in the next ten years and how can they be addressed?

Speakers from military operations, human resource agencies and Cranfield University helped to outline some of the main challenges which may be faced over the coming decade. Regeneration of carrier operations and airborne long-range anti-submarine capability are near-term issues, while the increasing development of unmanned and autonomous platforms will require focused management in the longer term. The opportunities and vulnerabilities of cyber, to airspace activity, require aviation safety managers to be more aware of the risks associated with that domain.

People issues are a perennial challenge. Recruiting, training and retaining enough people to generate sufficient military mass is a difficult task. Producing that mass at the right quality – one which benefits from diversity and has the appropriate skills and motivations – significantly compounds the challenge. Nurturing their skills and professionally developing our people, while looking after their physical, mental and environmental wellbeing, are vital and enduring undertakings. To have suitably qualified and experienced people (SQEP) in the right posts requires leaders to identify the appropriate levels of qualification and experience necessary and to be pragmatic with the resources available, understanding where the risks may lie as a result of their decisions.

Other potential trip hazards are likely to include the impact of incremental change, where subtle variations can be obscured, which undermine the effectiveness of our safety processes; hence the requirement to go back and check baseline assumptions on a regular basis. Short-term fixes, especially when implemented under financial pressure, can work initially but, when extended into the longer-term, can increase risk. There is also the danger that success over time breeds complacency; hence the need for a questioning culture to be routinely re-emphasised. 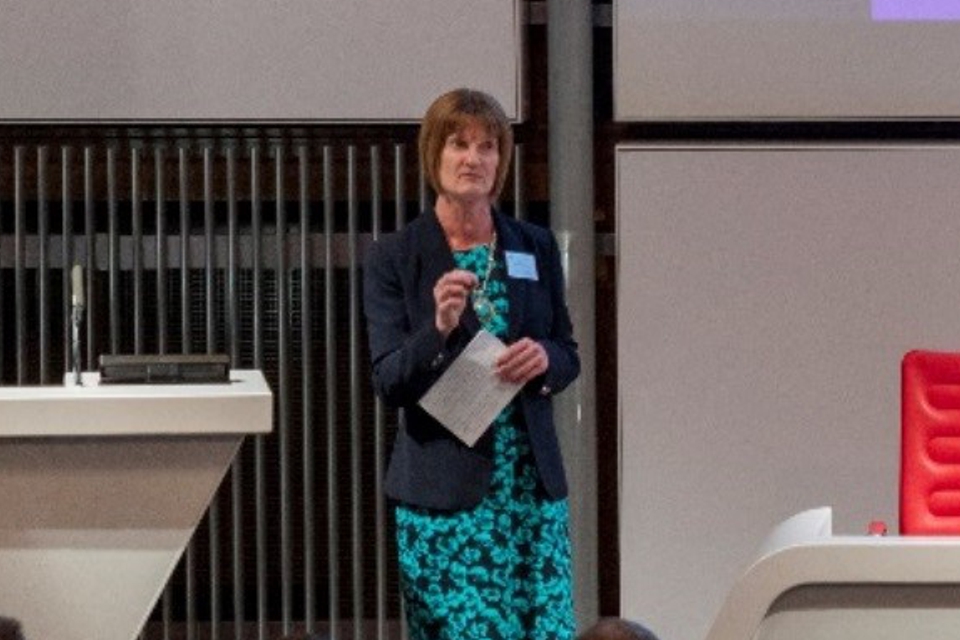 The conference was closed by the Director General of the Defence Safety Authority, Air Marshal Sue Gray, and the MOD Permanent Secretary, Sir Stephen Lovegrove. Their messages were consistent: 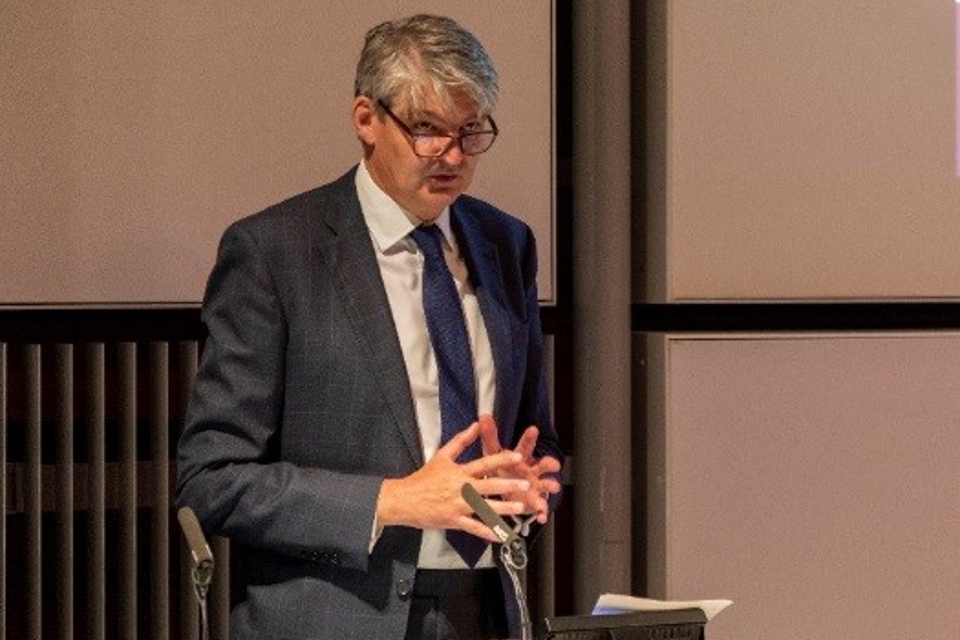 The findings of an independent study to reform the Reserve Forces for the future has been published.

British Army to possess most lethal tank in Europe

The British Army will receive a fleet of 148 Challenger 3 main battle tanks as part of an £800 million contract with Rheinmetall BAE Systems Land (RBSL), the Defence Secretary recently (07 May 2021) announced.