One of Dstl’s leading urban warfare experts travelled to the United States to participate in and help run a specialist training course.

The Defence Science and Technology Laboratory (Dstl) has world-renowned expertise in our specialist areas of defence science and technology. Our staff travel abroad to learn from allies such as the United States, and to share our research on an international stage.

In July 2022 Stuart Lyle, principal analyst, travelled to Los Angeles to attend and help deliver the world’s only urban operations planners course, as a guest of the U.S. National Guard.

It’s 0800 and in front of me is a room full of military personnel from across six nations and ranks ranging from Sergeant to Brigadier General. I had flown for nearly 12 hours, across eight time zones the day before. To add a final kicker, I was still recovering from a bout of COVID-19… Not the ideal context for presenting to an international military audience, both in the room and virtual, but that’s where I was, so… best to make the best of it. I found myself in Los Angeles in early July as a guest of the U.S. Army’s 40th Infantry Division (ID), an element of the U.S. National Guard. The 40th ID is blazing a trail to establish the U.S. Army’s (and the world’s) only Urban Operations Planners Course to prepare divisional-level staff for the complexity of planning and coordinating urban warfare, specifically in large-scale combat operations, or LSCO (pronounced Lis-Co in U.S. military parlance). There was a proof-of-concept course in 2021, but this was the first established course.

In December 2021 I helped run a NATO Urban training course and, in the audience was Brigadier General Rob Wooldridge, Deputy Commanding General of the 40th ID and the driving force behind the creation of this course. Following the NATO event he invited me to come out and be part of the teaching team for their course and I leapt at the chance to be a part of it.

The course was seven consecutive days long with roughly ten hours of instruction each day. While this could easily have been the proverbial “death-by-PowerPoint” that we’ve all experienced before, the schedule of instruction and calibre of presenters (myself included, I hope) ensured this was not the case.

Admiring the problem” focused on providing the context for why urban operations are so different from operations in other environments, and exploring why they can be so complicated. This is where I came in. My subject was the global trends within urbanisation and their likely impact on military operations. This covered the physical environment, demographic shifts, alternative governance and others. It was a condensed version of the Future Cities study that I led, with the intent to set the scene for why military planners should invest more time into thinking about and preparing for urban operations.

Other topics included subterranean operations, protection of civilians, Civil Affairs operations and employment and coordination of Joint Fires into urban terrain. These were highly complex subjects in their own right, but the instructors did a superb job keeping them accessible and reinforcing the relevancy for higher-formation planners. There were also multiple historical case studies explored throughout to provide tangible context for the lessons being taught. Another fascinating area was the exploration of how different nations approach the same challenges. We had presentations on NATO urban doctrine (past and present), individual nations’ urban doctrine and urban operations from our adversaries’ perspectives too.

The highlight of the course was, undoubtedly, the third day. It was going to be the longest, the hottest and, hands down, the most fun. We were going to visit the U.S. Army’s largest urban training site, known as the City of Razish, out in the Mojave Desert. A complex of over 700 buildings of varying sizes and home to a dedicated opposing force (OPFOR) whose job is to test visiting formations to their limits. But the day wasn’t going to be as simple as just a visit.

We arrived at the base at 0600 to receive final briefings for the rest of the day before making our way to the Flight Operations area. There we were divided into our pre-arranged Chalks (groups) and introduced to our transportation methods and crews. I had never been in a UH60 Blackhawk helicopter before, but this was going to be more than just a familiarisation flight or a simple air movement. As a Chalk Lead, I was tasked with running an Urban Terrain Zone appreciation lessons while flying out over LA towards the desert further inland. Just after take-off and about to begin my UTZ training serial. Definitely the most unusual presentation/teaching experience I’ve had so far. (Photo credit: Stuart Lyle)

Cities are divided into general urban terrain zones (UTZs) which are familiar to us all, e.g. low-density residential, business centre, light industrial, etc. Each of these have different characteristics in terms of their physical construction, population, diurnal trends and other things which may influence military operations in various ways. The Blackhawks flew us out of LA on a route that overflew as many different UTZs as possible and it was my job to impart as much pertinent information as I could and lead discussions throughout the flight. 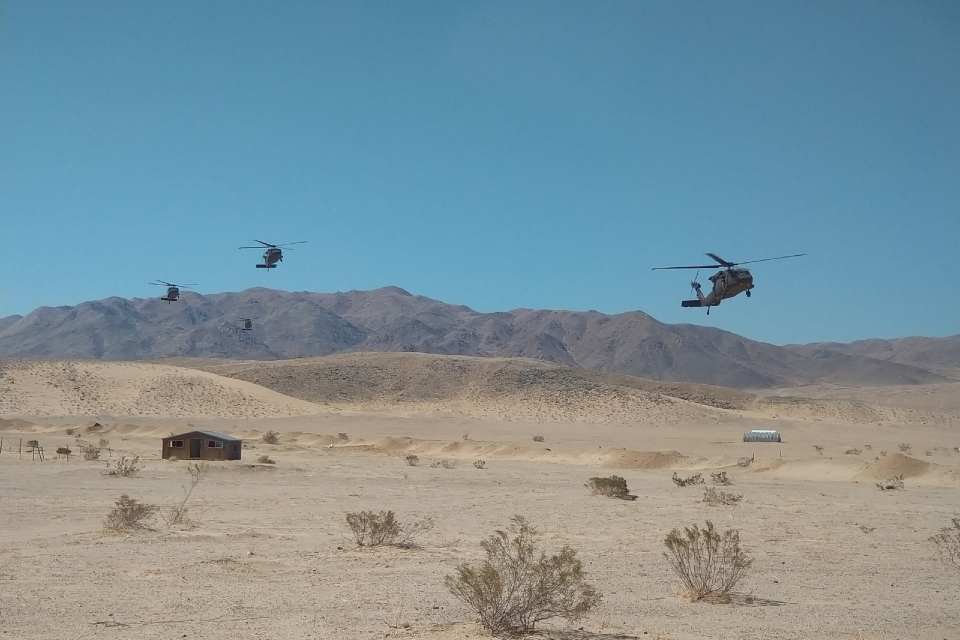 When we got to Razish the temperature was already approaching 40°C with the landscape around Razish looking like a moonscape. We were ushered into “the Embassy” where we met the 1* commander who discussed his personal experience of urban combat as a tank company commander in Iraq and how that shaped his understanding of urban operations at higher formations. We were then given a guided tour around the training facility, getting to meet many of the specialist teams who make up the OPFOR and finding out about their experiences employing specialist areas like Engineering, drone/counter-drone capabilities and Fires in the urban environment to really push the visiting formations.

On completion, we climbed back aboard our Blackhawks and flew back over LA, following a different route to continue the UTZ lessons. This flight was particularly interesting as we flew over some of the critical infrastructure which has not only local, but international significance as economic and transportation hubs; Los Angeles International Airport (LAX) and the port of Los Angeles. We were able to see the network of connecting infrastructure that only a bird’s eye view can provide and also see how some of the topics discussed so far on the course manifest themselves in reality. 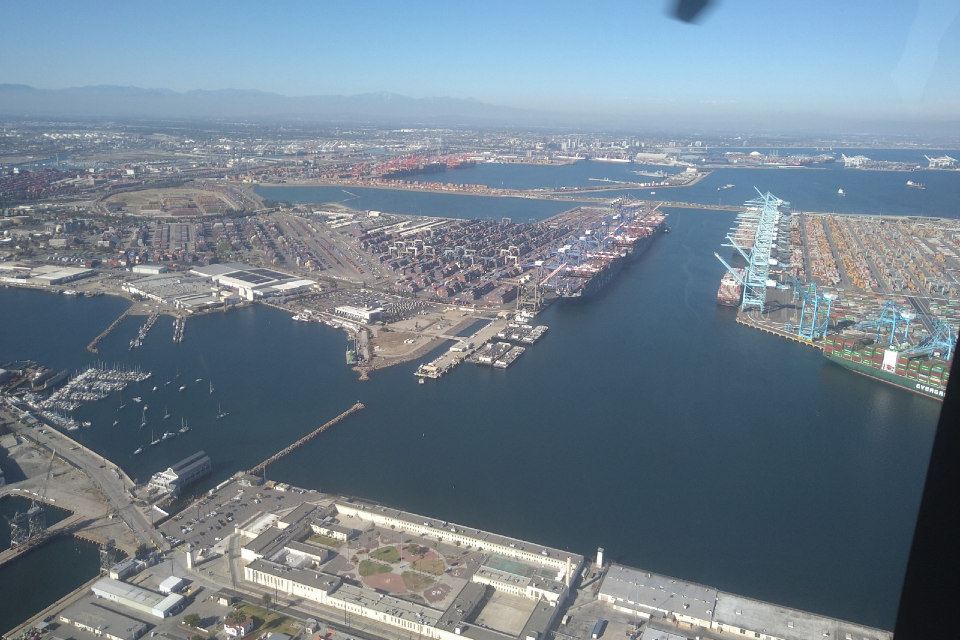 Flying over the Port of LA, the busiest container port in North America and one of the 10 busiest globally. Over 9 million containers are processed each year into and out of the US through this node. (Photo credit: Stuart Lyle) 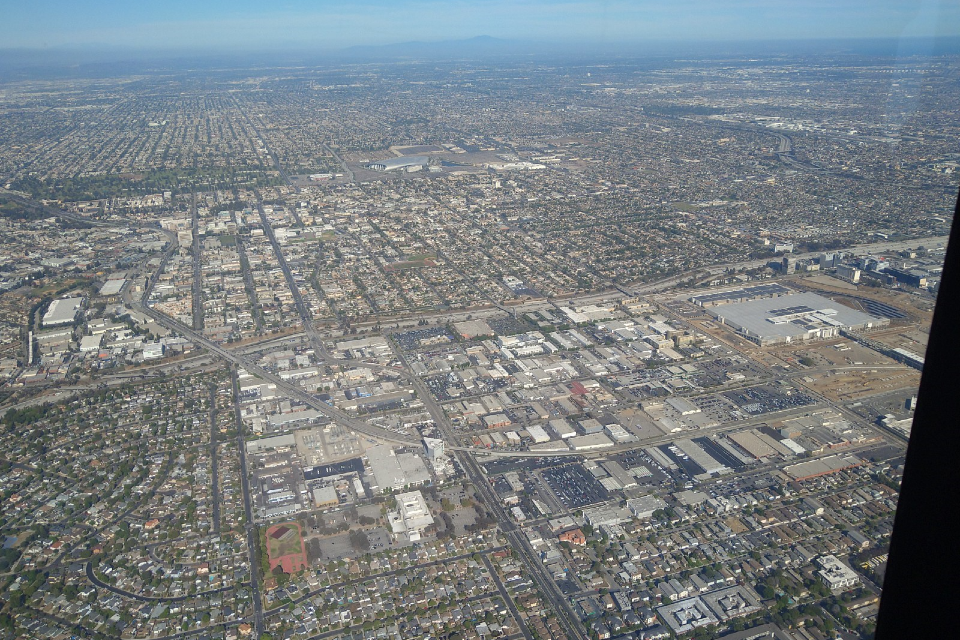 Observing the low-level sprawl of wider LA. The city is one of only two megacities (population over 10 million) in the entire United States. (Photo credit: Stuart Lyle)

As an avid student of urban operations, I have lost count of the amount of times I have watched the movie Blackhawk Down, so getting to fly over the rooftops and roadways of the city was as thrilling as it was intellectually fascinating.

The course continued for several more days and I delivered a session on the use of operational and historical analysis techniques to support better understanding of urban operations. I took some of the key lessons drawn from Dstl research and applied them to case studies for context. This was a great discussion (and debate) about some of the misconceptions surrounding urban combat. It also got the students to think more about the role data can play as well as the need to interrogate data to understand where and how best to apply it, something we strive to do here at Dstl. The course culminated in style with the students getting to play a bespoke divisional-level urban wargame designed by wargame designer Brian Train specifically for this course. The students broke into multiple competing teams and got to put their newly acquired knowledge to the test against one another. I got to assist with introducing the game and facilitating the games, which was a very rewarding experience. We use wargames extensively to support our analytical work at Dstl, with educating the military players being a side benefit. It was great to see it being used solely for education and seeing the students not only put their lessons to good use, but also enjoy the process.

The 40th ID’s Urban Operations Planners Course is a unique course, not just in the U.S. military, but anywhere. There is no equivalent course in the British military and there were a great many lessons that I took away from it, even having studied this particular subject for over seven years. This is partly due to the scale and scope of urban operations as well as the unique challenges they pose for military activities, hence the need for the course. However, it was also due to the calibre of the leadership and staff of the 40th ID as well as the incredible instructors they managed to gather to support it.

I got to spend time with long-time urban operations friends and colleagues, like Col. John Spencer of the Modern War Institute and Maj. Jayson Geroux of the Canadian Armed Forces. I also got to make and know some new ones like BG Rob Wooldridge, Sahr Muhammedally from the Center for Civilians in Conflict (CIVIC) and Dr Jacob Stoil of the School of Advanced Military Studies. It was an honour to be counted amongst them. 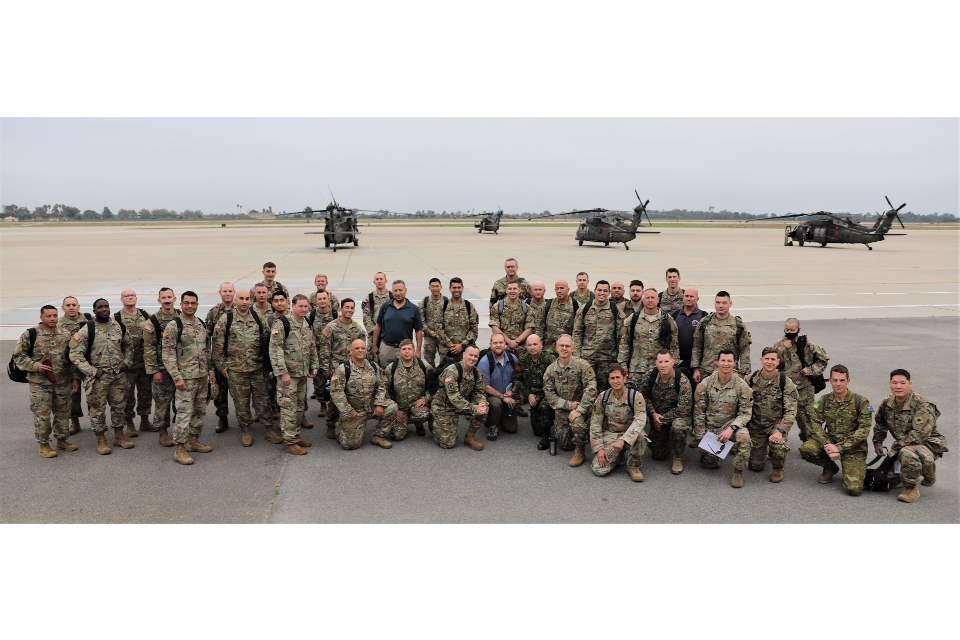 The course was a huge success and the dates are already set for next year’s with the aim being to make this a permanent course available to U.S. and international soldiers to attend. I am grateful for having been offered the opportunity to not only attend, but contribute to this endeavour and represent Dstl and our work.

More information on this unique course:

Find out more about what it’s like working for Dstl and explore our current job opportunities.

UK scientists support British Army in US experiment in California

More than 25 scientists and engineers from Dstl worked with UK allies testing a range of advanced innovative systems as part of Project Convergence 2022.

Scientists have field-tested their research into how the ground-breaking technology could be used to detect hazardous material.

Nicola Morrill was recognised by the University of Winchester for her inspirational work championing greater awareness and support for colleagues.

Engineer your way to a successful career with Dstl

The Defence Science and Technology Laboratory needs large numbers of engineers to work on exciting projects from combat systems to cyber security.

Community of minds will work alongside government scientists to shape future thinking on operating in an increasingly congested environment.