A man from Weston-super-Mare believed to have used encrypted communications platform EncroChat to distribute class A drugs across the South West is one of the UK’s most wanted fugitives.

Alex Male, aged 29, who is also accused of money laundering and conspiring to acquire a firearm as part of his drug dealing activity, is thought to be on the run in the Marbella area of Spain.

Male now features in the NCA’s Most Wanted campaign – run in conjunction with independent charity Crimestoppers – which targets fugitives who have fled overseas to escape justice. 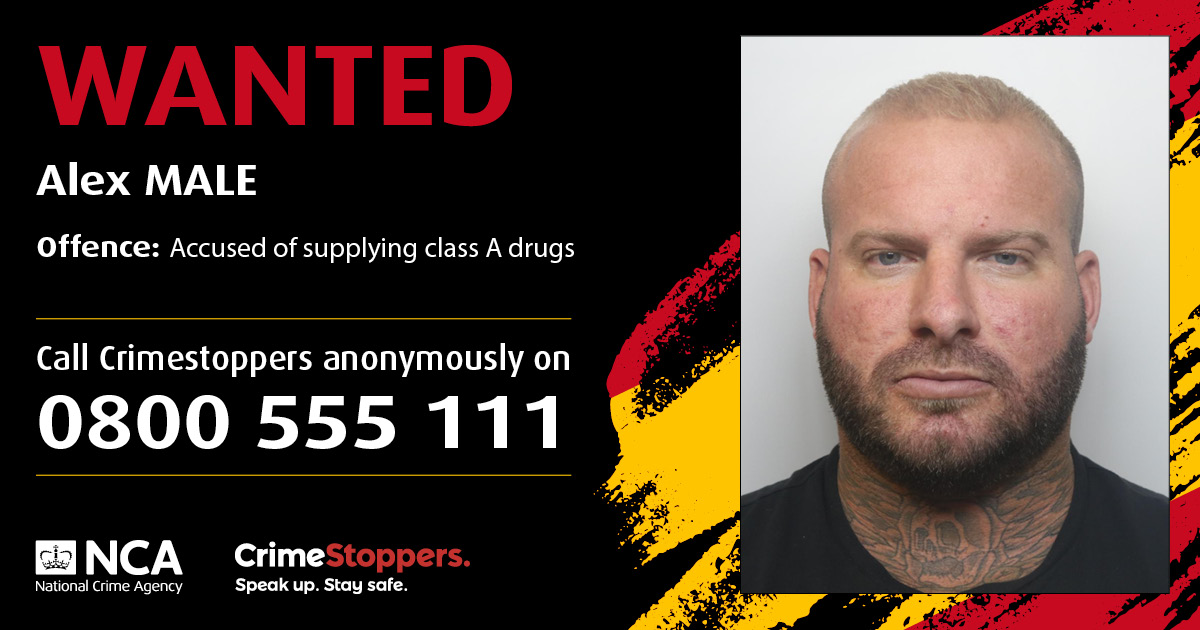 Male was arrested by the South West Regional Organised Crime Unit (SW ROCU) as part of Operation Venetic – the UK law enforcement response to the takedown of the EncroChat platform. He failed to adhere to his bail restrictions and went on the run in December 2020.

He also has a full tribal sleeve tattoo on his right arm going onto his chest with an angel on his back and ‘live’ tattooed on his right hand.

The NCA’s officers in Spain, who are working closely with their law enforcement partners to locate Male, are asking people who may have seen him, or know where he is, to contact Crimestoppers anonymously with any information.

“Alex Male is suspected of using EncroChat to orchestrate drug deals with crime groups across the South West of England. This type of criminality has a devastating impact on our communities, and he needs to face justice.

“The arrest last week of a fugitive within 24 hours of appearing on our Most Wanted list should serve as a warning to Male.

“Whether it’s from a tip off from a member of the public or use of our specialist capabilities, we will track him down and return him to the UK.”

Detective Inspector Adrian Hawkins from the SW ROCU said: “Alex Male is suspected of exploiting people throughout the South West and fleeing to Spain to live off the money he’s made. It’s time he’s brought back to the UK to face the serious charges against him.

“The smallest bit of information – given anonymously – could make all the difference. His appearance and distinctive tattoos mean people can’t fail to recognise him. I’d urge anyone who has any information to do the right thing.”

Spain is one of the most popular countries for British ex-pats and the two nations have a very strong law enforcement partnership.

The day after the Most Wanted campaign was launched in Spain last week, suspected drug trafficker Joshua Hendry was arrested by the Spanish National Police’s fugitives unit.

Anyone with information on Alex Male or any of our most wanted fugitives can call Crimestoppers anonymously on 0800 555 111, and callers from Spain should call the freephone Spanish number 900 926 111. There is also the online reporting form which can be completed via crimestoppers-uk.org/fugitives.

We encourage anyone living in Spain to visit the NCA and Crimestoppers websites and look at the most wanted fugitives.