As part of the launch of a major new THINK! campaign, Radio One DJ and co-host of ‘That Peter Crouch Podcast’, Chris Stark, has joined forces with the County Football Association (FA) to deliver a passionate team talk to a nation of football lovers to keep them safe on the roads, filmed at the Corinthian-Casuals ground in Tolworth.

While casualty figures overall have plateaued, young male drivers aged 17 to 24 are still 4 times more likely to be killed or seriously injured than drivers aged 25 and over, per billion miles travelled.

The campaign aims to celebrate those young drivers who don’t take risks on the road, promoting safe driving habits such as watching your speed, even when in a hurry or on roads you think you know well, and ignoring your phone when driving. The fear is that, as car traffic returns to pre-pandemic levels, the casualty figures among this high-risk group may increase.

THINK! Chris Stark and the County FA – a team talk to young drivers

Ex-professional footballer and Burnham Club chairman Glenn Skivington was devastated when his son Luca, 17, himself a promising footballer, was killed in a car accident in August 2019. He yesterday said:

I just want to spare another family going through the trauma of losing a son or daughter, a brother or sister, a best friend in such a totally avoidable and senseless manner.

I hope that through THINK!’s partnership with the County FA the whole football community can come together to spread positive messages about safe driving”. 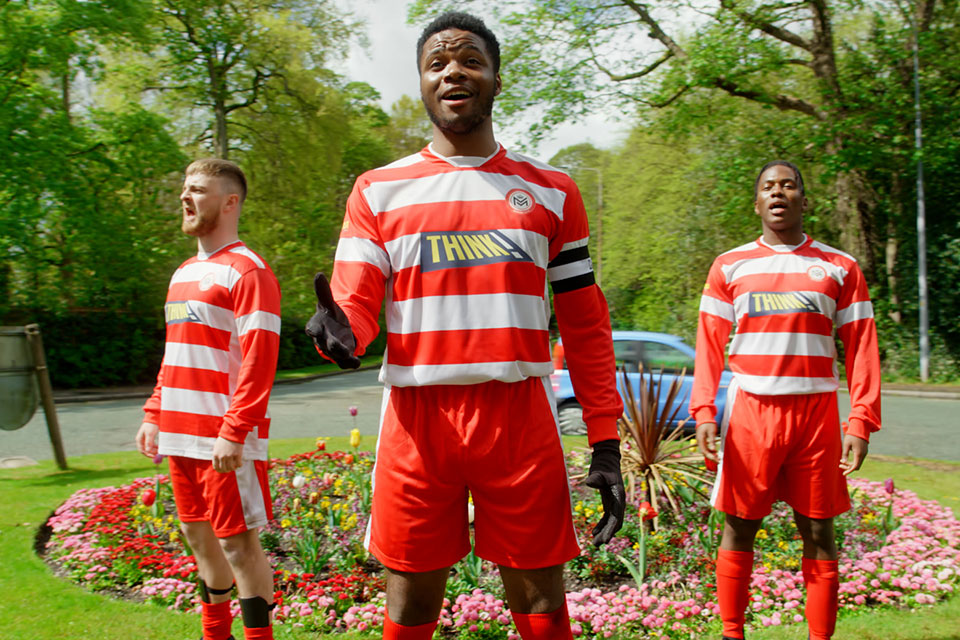 Every football fan knows that the banter around the sport is part of the magic. And even though driving your mates to football games isn’t possible right now, you don’t want to put yourself or others at risk by getting distracted on a group chat or speeding home to watch England play in the Euros.

When people think of car accidents involving young men, they think of boy racers and extreme risk-taking. But this campaign is warning of the small distractions, such as checking a message on your phone, creeping above the speed limit or driving too fast on country roads, all of which contribute to deaths and injuries on our roads remaining unacceptably high.

The County FA was a natural partner for us to help keep young drivers safe and celebrate those who don’t take risks.

As part of the County FA partnership, clubs and teams are sharing their own video clips, which can be seen in the team talk film, bringing alive the spirit of the County FA and showing the diversity of grassroots football across the UK. The following FAs and clubs are involved:

Hundreds of thousands of young players up and down the country drive to and from matches and training, enjoying the freedom that being able to drive brings them and their friends.

As grassroots football has finally got going again and has been extended through June, we want to ensure we are keeping all our players safe both on the pitch, and the roads this season, for pre-season and for many seasons to come. It’s a simple message, but potentially life-saving

New road will ease congestion in Long Stratton, cut noise and air pollution, and support plans for new homes and jobs in the area.

Joint statement on progress made by the taskforce at its meeting on 20 July 2021.

Joint statement on progress made by the taskforce at its meeting on 20 July 2021.

National policy statement given yesterday for national networks, the strategic plan for major road and rail schemes, to be reviewed for net zero commitments.

Digital consultation launched to shape the future of the OxCam Arc

People in the Oxford Cambridge Arc, and all with an interest in the area, will have the opportunity to contribute to the long-term development of the area, as part of the consultation.

Measures introduced to support recruitment and retention within the road haulage industry to ease pressure on the sector.

Funding to help light rail and tram services in the north and Midlands continue to run vital services as COVID-19 restrictions are lifted.