In a major publication ahead of the party conferences of the two main parties, the IPPR think tank has set out a vision for the economic recovery that rebalances power and spreads prosperity across the country.

It calls for £47 billion extra investment this year to help boost the recovery and take the economy to full employment - similar to the Biden administration’s stimulus - so that companies compete for workers rather than workers competing for jobs, driving up earnings and working conditions across the UK.

Measures such as a one-off windfall tax on firms that made excessive pandemic profits, a citizens’ wealth fund that invests in strategic sectors and a stimulus to deliver full employment form part of IPPR’s agenda for structural reform of the UK’s economy.

Merely boosting the current ‘structurally flawed’ economy that channels rewards to a privileged few is not enough, warns the report. It argues that problems of deep unfairness within the economy have worsened during the pandemic, so that as a result:

Even before the pandemic two in five full-time workers had seen a real-terms fall in their income over the previous decade. Now 5.5 million workers are in insecure work, of whom 960,000 are on zero-hours contracts – up from 168,000 in 2010. Some 2.5 million people work in roles that don’t match their skill level.

While many feared for their jobs and livelihoods, the richest gained through the rising prices of their property and financial investments. Between June 2020 and June 2021, the average house price rose by £31,000 - equivalent to an average UK salary for an entire year.

Market power and profits are overly concentrated within the top 1 per cent of companies, squeezing out many smaller competitors. Since the pandemic began, just six tech firms have seen their profits triple, adding more than $4 trillion to their combined market value. Pharmaceuticals, healthcare and gaming companies have also gained significantly. But small businesses are more likely to have closed or to have relied on government loans during lockdown; a quarter of the smallest firms that survive report debt repayment costs up by at least 20 per cent.

For nations and regions:

The inability of the UK’s notoriously top-down economic system to respond to local needs was highlighted by tensions between devolved leaders and Whitehall during the pandemic. The poorest areas faced the highest death rates and greatest economic impacts, and are now least able to recover, underscoring stark regional inequalities within England and across the UK.

Prosperity and justice after the pandemic

The report argues that the pandemic must mark an end to constantly growing inequality and the beginning of a new era where opportunity is shared among all people and places, and justice is hard-wired into every policy decision.

IPPR calls for four key power shifts to achieve this: to employees from employers; to companies that work in society’s interest, from those that extract from it; to those locked out of wealth from a system that has locked up wealth; and to the nations, regions and towns of the UK, from Whitehall and Westminster.

IPPR argues that, since the landmark 2018 IPPR Commission on Economic Justice, the public and political consensus on the value of state investment in the economy has shifted. The key question for policymakers now is not whether the state should invest, but how the benefits of that investment should be shared fairly.

To rebalance power in the economy and ensure everyone benefits from economic recovery, IPPR proposes:

“The UK suffers from concentrations and imbalances of power that are both a cause of some of our economy’s problems, and a barrier to solving them. The pandemic must mark the end of this era of growing inequality and the beginning of a new one, in which sharing opportunity across people and places is a core objective of economic and social policy.

“As well as measures to support and grow the economy, such as a significant economic stimulus and long-term investment, shifting power must now be a priority. By speaking to people’s concerns and their disempowerment, these power shifts have the potential to build towards a better economy that works for everyone. We call this economic justice.”

“During the pandemic we clapped for key workers, but our report shows that even before Covid-19 two in five of those in work had seen a fall in pay. The UK must target full employment, where instead of workers competing for jobs, employers fight to attract workers.

“Most people do not want to see the economy go back to how it was working before the pandemic. There is a need for change, and our plan to hard-wire the economy for justice will ensure that the benefits of the recovery are shared with everyone.

“While some companies have been closed for the best part of two years, others have made bigger profits than ever before. A windfall tax on excess profits would help prevent those firms gaining an unfair advantage and close the gap with the shops, restaurants and cafes that are the backbone of our economy and have suffered the worst.”

Carys Roberts and George Dibb are available for interview

The IPPR paper, Prosperity and justice after the pandemic by George Dibb, Carsten Jung, Henry Parkes and Shreya Nanda is available for download at: http://www.ippr.org/research/publications/prosperity-and-justice-post-pandemic

The report will be launched at a webinar featuring a keynote speech from Heather Boushey, economic advisor to President Biden, alongside contributions from Frances O’Grady (TUC), Stephanie Flanders (Bloomberg), Martin McTague (FSB) and IPPR researchers. The event takes place on Wednesday 22 September at 15:00. Sign up to attend the event here. 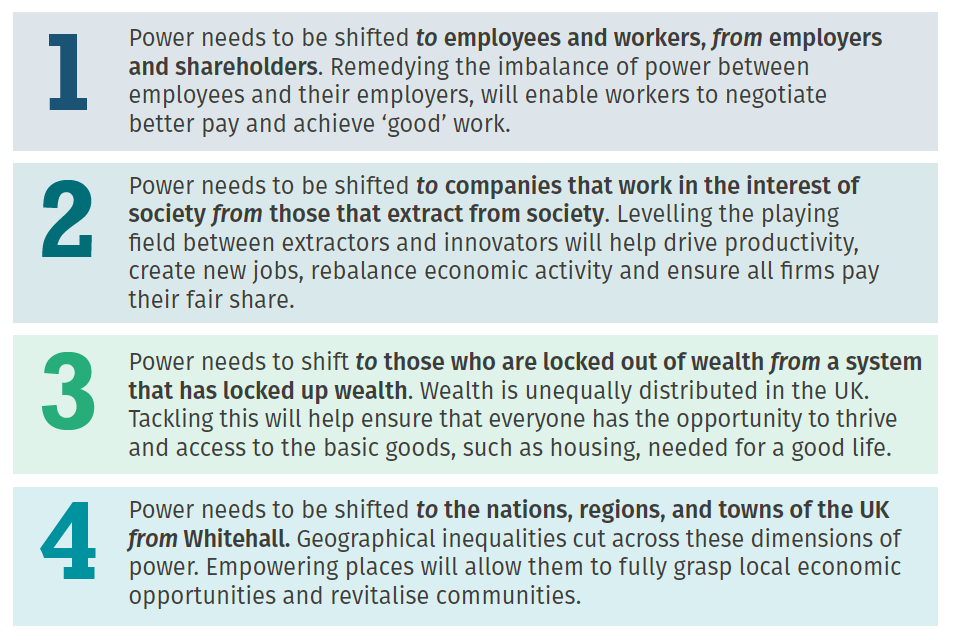 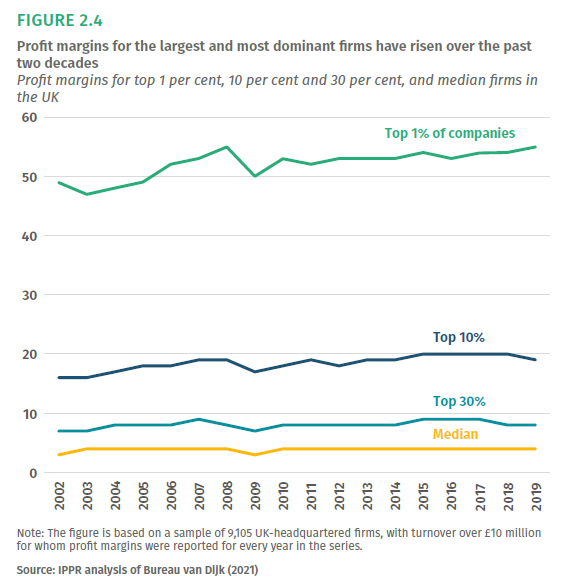 The IPPR Centre for Economic Justice was set up to broaden and deepen the work of the IPPR Commission for Economic Justice, whose landmark final report, Prosperity and justice: a plan for the new economy, was published in September 2018: https://www.ippr.org/research/publications/prosperity-and-justice

A large-scale study of households on low incomes has revealed the extent of the debt crisis hanging over the UK’s poorest families as the country braces to weather a cost-of-living crisis.

Julian Jessop, Economics Fellow at free market think tank the Institute of Economic Affairs, commented on the figures, published today by the Office for National Statistics

Councils lack the powers and resources they need to meet net-zero targets or adapt to the effects of climate change, says a new report urging the Government to devolve climate powers to local areas.

Inflation likely to be well above 4% by the end of the year, says IEA expert

IPPR - The disease of disparity: A blueprint to make progress on health inequalities in England

Health inequalities are wide and widening in England.

Employers could undo the progress made over the last 18 months and deepen workplace inequalities if organisations fail to override the deep-rooted perceptions of ‘office culture’, a leading think tank has warned.

Beccy Baird, Senior Fellow at The King’s Fund, commented on the announcement from NHS England and the Department of Health and Social Care of a blueprint to improve access to general practice